Found 1975, approx., recognized 1980
35° 21′ N., 98° 41′ W. A single stone weighing 3,912 g was recovered by Deon Yearwood from the tines of his cotton cultivator in Washita County, Oklahoma. The rock was considered to be unusual in appearance and so it was saved. Some years later, as communicated by M. Bostick (2005), Mr. Yearwood asked a professor at Oklahoma University if he would look at the stone to verify his suspicions that it was a meteoriteWork in progress. A solid natural object reaching a planet’s surface from interplanetary space. Solid portion of a meteoroid that survives its fall to Earth, or some other body. Meteorites are classified as stony meteorites, iron meteorites, and stony-iron meteorites. These groups are further divided according to their mineralogy and Click on Term to Read More. Finding a lack of interest to even look at the rock, he brought it to Southern University at Bedford, Oklahoma, where the suggestion was made to contact Harvey H. Nininger. Upon his initial examination, Nininger immediately recognized the stone as a meteorite, and he and Jim Westcott obtained the meteorite from Mr. Yearwood in return for him receiving two cut slices from the meteorite. 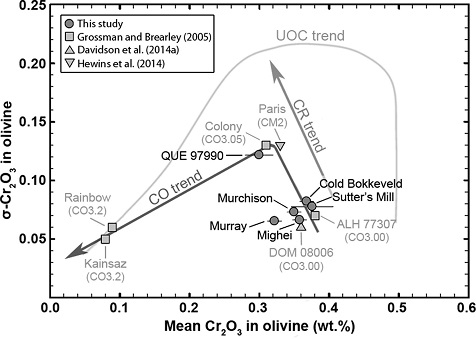 In their comprehensive oxygenElement that makes up 20.95 vol. % of the Earth's atmosphere at ground level, 89 wt. % of seawater and 46.6 wt. % (94 vol. %) of Earth's crust. It appears to be the third most abundant element in the universe (after H and He), but has an abundance only Click on Term to Read More isotope study of carbonaceous chondrite groups, Clayton and Mayeda (1999) showed that many ungrouped members plot along the same mixing line and fill the hiatus between the CO and CM fields (see diagram below). They suggest that both CO and CM groups consist of a common anhydrous silicateThe most abundant group of minerals in Earth's crust, the structure of silicates are dominated by the silica tetrahedron, SiO44-, with metal ions occurring between tetrahedra). The mesodesmic bonds of the silicon tetrahedron allow extensive polymerization and silicates are classified according to the amount of linking that occurs between the precursor, while the CM group represents the interaction of this anhydrous precursor with an aqueous reservoir. The ungrouped members are transitional, with variable water:rock ratios as indicated by the tick marks along the mixing line.

Image courtesy of Clayton and Mayeda, GCA, vol. 63, p. 2094 (1999)
‘Oxygen isotope studies of carbonaceous chondrites’
See also this oxygen three-isotope diagram presented by Jacquet et al., MAPS, vol. 51, #5, p. 862 (2016)
‘Northwest Africa 5958: A weakly altered CM-related ungrouped chondrite, not a CI3’ (http://dx.doi.org/10.1111/maps.12628) Although there is a hiatus between the CM and CO groups on an oxygen three-isotope diagram, the additional data plots calculated by Greenwood et al. (2014) clearly show that the CM O-isotopic trend line intersects the CO field, and they have posited a new theory based on the premise that both groups formed on a common parent body. They suggest that the CO group might represent an anhydrous inner zone, in which the initial hydrous component was rapidly liberated through endogenous (radiogenic) heating and vented to the surface and into space. Conversely, the outer zone represented by the CM group experienced a high degree of aqueous alteration over an extended duration. A compatable scenario was presented by Fu and Elkins-Tanton (2013) in which early accretionAccumulation of smaller objects into progressively larger bodies in the solar nebula leading to the eventual formation of asteroids, planetesimals and planets. The earliest accretion of the smallest particles was due to Van der Waals and electromagnetic forces. Further accretion continued by relatively low-velocity collisions of smaller bodies in the Click on Term to Read More (within ~2 m.y. of CAISub-millimeter to centimeter-sized amorphous objects found typically in carbonaceous chondrites and ranging in color from white to greyish white and even light pink. CAIs have occasionally been found in ordinary chondrites, such as the L3.00 chondrite, NWA 8276 (Sara Russell, 2016). CAIs are also known as refractory inclusions since they Click on Term to Read More formation) of a planetesimal of significant size (>120 km in diameter), composed of low-density material akin to the CM chondrites, could experience internal differentiationA process by which a generally homogeneous chondritic body containing mostly metal, silicates and sulfides will melt and form distinct (differentiated) layers of different densities.   When the melting process continues for a long enough period of time, the once chondritic body will re-partition into layers of different composition including Click on Term to Read More without eruption of magmaMolten silicate (rock) beneath the surface of a planetary body or moon. When it reaches the surface, magma is called lava. Click on Term to Read More to the surface, thereby retaining a primitive hydrated crustal region. 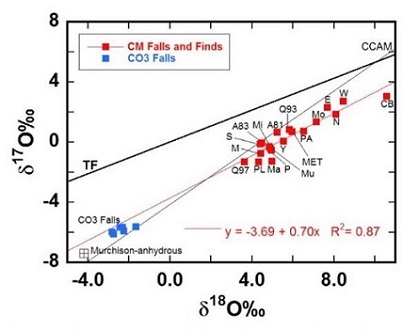 Diagram courtesy of Greenwood et al., 45th LPSC #2610 (2014)
A81:ALHA81002; A83:ALH 83100; CB:Cold Bokkeveld; E:Essebi; Ma:Maribo; MET:MET 01070; MI:Mighei; Mo:Moapa; M:Murchison; Mu:Murray; N:Nogoya; P:Paris (mean); PA:Paris-altered; PL:Paris-less altered; S:SCO06043; Q93:QUE93005; Q97:QUE97990; Y:Y791198; W:WIS91600; CO3 falls:Moss A comparitive analysis of CM and CO chondrites led Chaumard et al. (2018) to the conclusion that both of these groups formed in a common isotopic reservoir and accreted identical anhydrous precursor material comprised of the same two type I chondrule populations: 1) Δ17O ~ –2.5‰, Mg# <96, and 2) Δ17O ~ –5‰, Mg# >98.5. Both CM and CO chondrites also accreted identical type II chondrule populations. However, they recognized the many other characteristics that indicate a formation for these two groups on separate parent bodies, including differences in chondrule size (0.15 and 0.30 mm for CO and CM, respectively), matrix abundance (30–35 and 70 vol% for CO and CM, respectively), abundance of type II chondrules that contain relict olivine grains (~48% and 12–25% for CO and CM, respectively), average CRE age (22 [±18] and 2.8 [±3.1] m.y. for CO and CM, respectively), accretion age (~2.1–2.7 and ~3.5–5.0 m.y. after CAIs for CO and CM, respectively), and in abundance of hydrous phases (ice:rock ratio of ~0.1–0.2 and ~0.3–0.6 for CO and CM, respectively). They propose a scenario in which the snow line moved inward during the time interval between the accretion at nearly the same location (~2–3 AU) of these two distinct planetesimalsHypothetical solid celestial body that accumulated during the last stages of accretion. These bodies, from ~1-100 km in size, formed in the early solar system by accretion of dust (rock) and ice (if present) in the central plane of the solar nebula. Most planetesimals accreted to planets, but many – Click on Term to Read More.

Diagram credit: Chaumard et al., GCA, vol. 228, p. 220–242 (1 May 2018)
‘Oxygen isotope systematics of chondrules in the Murchison CM2 chondrite and implications for the CO-CM relationship’
(https://doi.org/10.1016/j.gca.2018.02.040) Kimura et al. (2008) argue for the additional inclusionFragment of foreign (xeno-) material enclosed within the primary matrix of a rock or meteorite. Click on Term to Read More of CR, CH, CB, and CM carbonaceous chondrites as petrologic type 3.00 examples, notwithstanding the general designation of some meteorites in these groups as type 2 due to aqueous alteration features. In light of this petrologic typing paradox, they propose that a separate scale be adopted to describe aqueous alteration distinct from that which describes thermal metamorphism. Separate classification schemes for aqueous alteration have since been proposed (see the Murchison page for details.

Studies show that the highly unequilibrated (3.0–3.05) CO chondrite NWA 4530 is devoid of FeNi-metal, contains chondrules of type GF, and is unusually strongly oxidizedOxidation and reduction together are called redox (reduction and oxidation) and generally characterized by the transfer of electrons between chemical species, like molecules, atoms or ions, where one species undergoes oxidation, a loss of electrons,  while another species undergoes reduction, a gain of electrons. This transfer of electrons between reactants Click on Term to Read More, all of which suggest that the regolithMixture of unconsolidated rocky fragments, soil, dust and other fine granular particles blanketing the surface of a body lacking an atmosphere. Regolith is the product of "gardening" by repeated meteorite impacts, and thermal processes (such as repeated heating and cooling cycles).   Click on Term to Read More of the CO parent body is heterogeneous (Bunch et al., 2010). A study of Colony magnetiteFe oxide, Fe2+Fe3+2O4, containing oxidized iron (Fe3+) found in the matrix of carbonaceous chondrites and as diagnostic component in CK chondrites. In CK chondrites, magnetite is typically chromian, containing several wt. % Cr2O3. Click on Term to Read More I–Xe systematics indicates that this isotopic systemDefinable part of the universe that can be open, closed, or isolated. An open system exchanges both matter and energy with its surroundings. A closed system can only exchange energy with its surroundings; it has walls through which heat can pass. An isolated system cannot exchange energy or matter with closed 6.1 (±3.1) m.y. after Shallowater, and ~8 m.y. after OrgueilA large carbonaceous Ivuna-like (CI1) chondrite that disintegrated and fell in fragments near the French town of Orgueil on May 14, 1864. About 20 pieces, totaling ~12 kg in mass, were subsequently recovered from an area of several square km, some head-sized but most were smaller than a fist. Specimens Click on Term to Read More (Pravdivtseva et al., 2007). The photo of Colony shown above is a 0.2 g specimen, and the bottom image is an excellent petrographic thin sectionThin slice or rock, usually 30 µm thick. Thin sections are used to study rocks with a petrographic microscope. micrograph of Colony, shown courtesy of Peter Marmet. 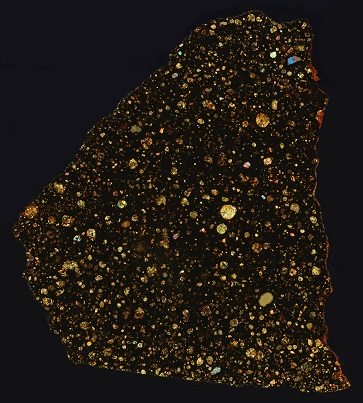