ElementSubstance composed of atoms, each of which has the same atomic number (Z) and chemical properties. The chemical properties of an element are determined by the arrangement of the electrons in the various shells (specified by their quantum number) that surround the nucleus. In a neutral atom, the number of that makes up 20.95 vol. % of the Earth’s atmosphere at ground level, 89 wt. % of seawater and 46.6 wt. % (94 vol. %) of Earth’s crustOutermost layer of a differentiated planet, asteroid or moon, usually consisting of silicate rock and extending no more than 10s of km from the surface. The term is also applied to icy bodies, in which case it is composed of ices, frozen gases, and accumulated meteoritic material. On Earth, the. It appears to be the third most abundant element in the universeThat which contains and subsumes all the laws of nature, and everything subject to those laws; the sum of all that exists physically, including matter, energy, physical laws, space, and time. Also, a cosmological model of the universe. (after H and He), but has an abundance only ~1/1500 that of H. Atmospheric oxygen normally occurs in molecular form, O2. OzoneAn oxygen molecule (O3) composed of three oxygen atoms., O3, and monatomic oxygen, O2-, predominate in the upper atmosphere, where ozone shields the Earth from the Sun’s UV radiation. Oxygen combines with most other elements and, when this reaction occurs rapidly (with release of heat and light), it is described as combustion, or burning (exothermicA chemical or nuclear reaction that liberates heat energy so that heat flows from the system to the surroundings. Exothermic reactions cause an increase in temperature. A classic exothermic reaction is the mixing of a strong acid with water. In order to prevent an explosive and dangerous reaction, the acid). Oxygen usually occurs bonded with another element (e.g., CO, CO2), being too reactive to persist very long as O2. All O2 in Earth’s atmosphere is constantly renewed by photosynthetic activity. Oxygen is very common as ionic crystalline solids bonded with various metalElement that readily forms cations and has metallic bonds; sometimes said to be similar to a cation in a cloud of electrons. The metals are one of the three groups of elements as distinguished by their ionization and bonding properties, along with the metalloids and nonmetals. A diagonal line drawn ions to yield “oxides” and bonded with Si to form silicates. 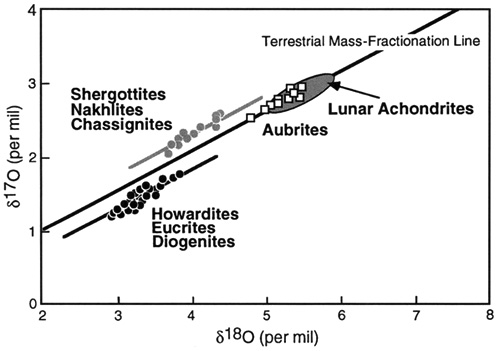 The oxygen atoms in terrestrial (and lunar) rocks do not have identical proportions of the three isotopes, but the ratios of these isotopes follow a simple relationship controlled by their masses. Rocks with the same 18O/16O ratio will have the same 17O/16O ratios. But if their 18O/16O ratios differ by say 0.2 %, their 17O/16O ratios will differ by half this amount, 0.1 %. This behavior, called “mass-dependent fractionationConcentration or separation of one mineral, element, or isotope from an initially homogeneous system. Fractionation can occur as a mass-dependent or mass-independent process.,” yields the “terrestrial mass-fractionation line” (slope = 0.52) on the isotopeOne of two or more atoms with the same atomic number (Z), but different mass (A). For example, hydrogen has three isotopes: 1H, 2H (deuterium), and 3H (tritium). Different isotopes of a given element have different numbers of neutrons in the nucleus. plot. All terrestrial rocks plot along this line, as do materials from the Moon. This coincidence of Earth and Moon isotopes is taken as evidence that the two bodies share a common origin. The mass-fractionation lines for other planets (Mars, 4 VestaThird largest and fourth brightest asteroid; it was discovered in 1807 by Heinrich Olbers and named for the ancient Roman goddess of the hearth. 4 Vesta has a basaltic surface composition and an average density not much less than that of Mars. Evidently lava once flowed here indicating that the) are parallel, indicating slightly different ratios of the three isotopes, but still mass-dependent fractionation. In contrast, meteorites show evidence of formation in many isotopically distinct environments, permitting classification based on oxygen isotopic compositions.