Third largest and fourth brightest asteroid; it was discovered in 1807 by Heinrich Olbers and named for the ancient Roman goddess of the hearth. 4 Vesta has a basaltic surface composition and an average densityMass of an object divided by its volume. Density is a characteristic property of a substance (rock vs. ice, e.g.). Some substances (like gases) are easily compressible and have different densities depending on how much pressure is exerted upon them. The Sun is composed of compressible gases and is much not much less than that of Mars. Evidently lavaHot molten or semifluid rock derived from a volcano or surface fissure from a differentiated and magmatically active parent body. once flowed here indicating that the interior was at one time molten, heated by short-lived radio-isotopes. A deep impact craterBowl-like depression ("crater" means "cup" in Latin) on the surface of a planet, moon, or asteroid. Craters range in size from a few centimeters to over 1,000 km across, and are mostly caused by impact or by volcanic activity, though some are due to cryovolcanism. 456 km wide (on a world itself not much over 500 km across!), visible to the Hubble Space TelescopeA 2.4-meter reflecting telescope, which was deployed in low-Earth orbit (600 kilometers) by the crew of the space shuttle Discovery (STS-31) on 25 April 1990. The Hubble Space Telescope is a cooperative program of the European Space Agency (ESA) and the National Aeronautics and Space Administration (NASA). HST's current complement, exposes 4 Vesta’s mantleMain silicate-rich zone within a planet between the crust and metallic core. The mantle accounts for 82% of Earth's volume and is composed of silicate minerals rich in Mg. The temperature of the mantle can be as high as 3,700 °C. Heat generated in the core causes convection currents in. 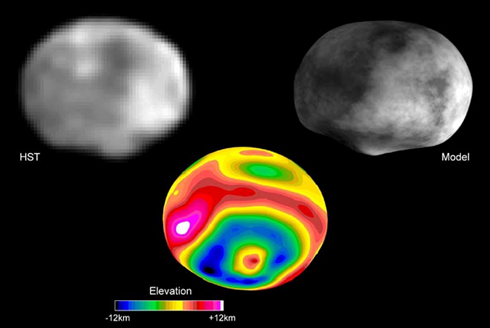 The theory is that, during the impact event, large chunks of matter were ejected from 4 Vesta to form smaller asteroids of similar composition – so-called Vestoids. Some of these bits of 4 Vesta subsequently entered near-Earth orbits, and are thought to be the sources of the howardites, eucritesMost common type of achondrite meteorite and a member of the HED group. Eucrites are basalts composed primarily of pigeonite and anorthite (An60-98). Eucrites have been placed into three subgroups based on mineralogical and chemical differences. • Non-cumulate eucrites represent the upper crust that solidified on a magma ocean after, and diogenitesDiogenites belong to the evolved achondrite HED group that also includes howardites and eucrites. They are named after the Greek philosopher Diogenes of Apollonia, of the 5th century BCE, who was the first to suggest that meteorites come from outer space (a realization forgotten for over 2,000 years). They are.

Vesta is located in a part of the main asteroid beltBelt located between 2.12 and 3.3 AU from the Sun and located between the orbits of Mars and Jupiter containing the vast majority of asteroids. The asteroid belt is also termed the main asteroid belt or main belt to distinguish it from other asteroid populations in the Solar System such that makes it almost impossible for it to send meteorites to us. So there are probably intermediate asteroids, which were once part of Vesta, located in more favorable orbits that provide delivery. This theory has been bolstered by the discovery that the asteroid 1929 Kollaa, based on its reflectance spectrum, was once a part of Vesta, and, moreover, that it moves in an orbitThe elliptical path of one body around another, typically the path of a small body around a much larger body. However, depending on the mass distribution of the objects, they may rotate around an empty spot in space • The Moon orbits around the Earth. • The Earth orbits around from which meteorites could much more easily be launched Earthward. 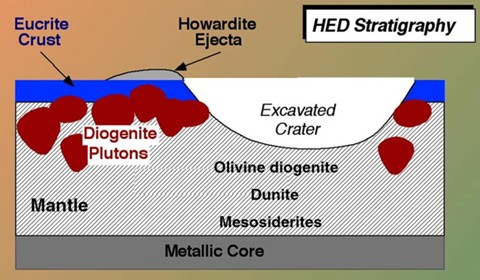