Meteoriticists usually state the composition of olivine present in a meteoriteWork in progress. A solid natural object reaching a planet’s surface from interplanetary space. Solid portion of a meteoroid that survives its fall to Earth, or some other body. Meteorites are classified as stony meteorites, iron meteorites, and stony-iron meteorites. These groups are further divided according to their mineralogy and Click on Term to Read More based on its fayalite content which corresponds to the percentage of iron in the olivine. So, Fa9.7 means the iron content in the olivine is 9.7%.

Complete solid solutions occur in both the forsterite-fayalite series, and the monticellite (CaMgSiO4) to kirschteinite (CaFeSiO4) series. Kirschteinite has been found in CAISub-millimeter to centimeter-sized amorphous objects found typically in carbonaceous chondrites and ranging in color from white to greyish white and even light pink. CAIs have occasionally been found in ordinary chondrites, such as the L3.00 chondrite, NWA 8276 (Sara Russell, 2016). CAIs are also known as refractory inclusions since they Click on Term to Read More and other refractory inclusionsInclusions found predominantly in carbonaceous chondrites and are rich in refractory elements particularly calcium, aluminum and titanium that in various combinations form minerals such as spinel, melilite, perovskite and hibonite. There are two types of refractory inclusion: • Ca Al-rich inclusions (CAIs) • Amoeboid olivine aggregates (AOAs) Refractory inclusions were Click on Term to Read More, some angrites and even in the matrices of some CV3 oxidixed chondrites where the CV3 parent bodyThe body from which a meteorite or meteoroid was derived prior to its ejection. Some parent bodies were destroyed early in the formation of our Solar System, while others like the asteroid 4-Vesta and Mars are still observable today. Click on Term to Read More experienced hydrothermal alteration. The monticellite-kirschteinite series has larger unit cellSmallest repeating unit of a crystalline solid that can be used to describe the entire structure. Unit cells are like templates which can be copied to produce an entire crystal. than the forsterite-fayalite series, accommodating the larger Ca cationPositively charged ion. Click on Term to Read More.

Fe-Mn substitutionReplacement of one ion or ionic group for another in the same structural site in a mineral yielding a solid solution. Most substitution in minerals is of cations which are smaller and essentially sit in a lattice of oxygen anions. Anionic substitution does occur in halides. Substitutions are classified based forms a complete solid solutionCompositional variation resulting from the substitution of one ion or ionic compound for another ion or ionic compound in an isostructural material. This results in a mineral structure with specific atomic sites occupied by two or more ions or ionic groups in variable proportions. Solid solutions can be complete (with between tephroite (Mn2SiO4) and fayalite (no image provided). There is more Mn and Ca substitution in Fe-rich end members than Mg-rich end members. Ni is commonly present in Mg-rich olivine. Tephroite is only a minor component in olivines. The fayalite/tephroite ratio is represented by the Fe/Mn ratio in olivine. All meteoritic olivines have high Fe/Mn ratios. 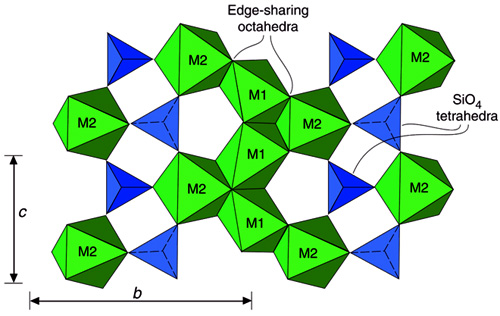 The olivine structure consists of Isolated (SiO4)4- tetrahedra pointing alternately up and down along rows parallel to c axis. Mg2+ and Fe2+ occur in octahedral coordination (M-cations) in two distinct octahedral sites: a distorted M1 site and a more regular M2 site. Layers occur parallel to (100) with edge-sharing octahedra cross-linked by isolated (SiO4)4- tetrahedra. Mg2+ and Fe2+ appear to occupy the M1 or M2 sites without preference in the Mg-Fe series. In CaMgSiO4 olivine, Ca2+ prefers M2 site with Mg2+ in the M1 site.

Olivine has several polymorphs. The α olivine structure described above is only stable in upper part of Earth’s mantleMain silicate-rich zone within a planet between the crust and metallic core. The mantle accounts for 82% of Earth's volume and is composed of silicate minerals rich in Mg. The temperature of the mantle can be as high as 3,700 °C. Heat generated in the core causes convection currents in Click on Term to Read More. At ~400 km depth, olivine transforms into ringwooditeHigh-pressure olivine polymorph with a spinel structure that is found in highly shocked meteorites (above ~50 GPa, shock level > S5) and the Earth's transition zone mantle (~13 GPa). Under even higher pressure in the lower mantle (~24 GPa), ringwoodite decomposes into perovskite (Mg,Fe)SiO3, and magnesiowüstite (Mg,Fe)O, whose properties are Click on Term to Read More (γ spinelMg-Al oxide, MgAl2O4, found in CAIs. structure), which is about 10% denser. At still greater depths (~670 km), ringwoodite decomposes into magnesiowüstite, (Mg,Fe)O and (MgVI,FeVI)SiVIO3, which has a perovskiteTerm applied to A2+B4+O3 high-pressure minerals with a perovskite structure (general formula ABX3) where "A" is a metal that forms large cations such as Mg, Fe or Ca, "B" is another metal that forms smaller cations such as Si (called silicate perovskite), Ti and to a lesser degree Al, and Click on Term to Read More structure (Si in octahedral coordination).