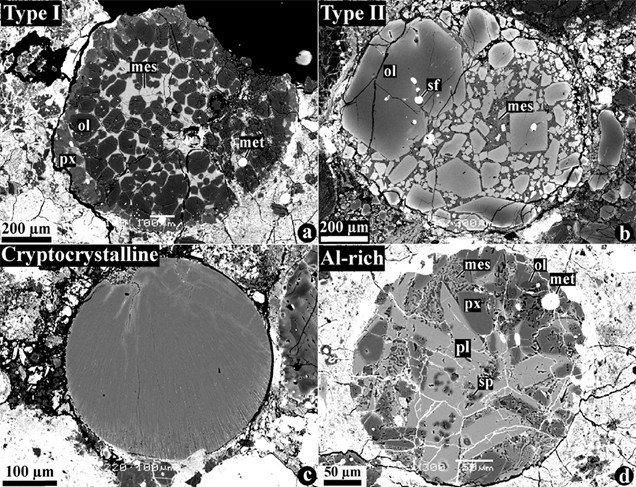 Roughly spherical aggregate of coarse crystals formed from the rapid cooling and solidification of a melt at  ~1400 ° C. Large numbers of chondrules are found in all chondritesChondrites are the most common meteorites accounting for ~84% of falls. Chondrites are comprised mostly of Fe- and Mg-bearing silicate minerals (found in both chondrules and fine grained matrix), reduced Fe/Ni metal (found in various states like large blebs, small grains and/or even chondrule rims), and various refractory inclusions (such except for the CI group of carbonaceous chondrites. Chondrules are typically 0.5-2 mm in diameter and are usually composed of olivineGroup of silicate minerals, (Mg,Fe)2SiO4, with the compositional endpoints of forsterite (Mg2SiO4) and fayalite (Fe2SiO4). Olivine is commonly found in all chondrites within both the matrix and chondrules, achondrites including most primitive achondrites and some evolved achondrites, in pallasites as large yellow-green crystals (brown when terrestrialized), in the silicate portion and pyroxeneA class of silicate (SiO3) minerals that form a solid solution between iron and magnesium and can contain up to 50% calcium. Pyroxenes are important rock forming minerals and critical to understanding igneous processes. For more detailed information, please read the Pyroxene Group article found in the Meteoritics & Classification category., with smaller amounts of glass and Ni-Fe metalElement that readily forms cations and has metallic bonds; sometimes said to be similar to a cation in a cloud of electrons. The metals are one of the three groups of elements as distinguished by their ionization and bonding properties, along with the metalloids and nonmetals. A diagonal line drawn. Chondrules can sometimes exceed 10 mm and are considered megachondrules or macrochondrules. Together with CAIsSub-millimeter to centimeter-sized amorphous objects found typically in carbonaceous chondrites and ranging in color from white to greyish white and even light pink. CAIs have occasionally been found in ordinary chondrites, such as the L3.00 chondrite, NWA 8276 (Sara Russell, 2016). CAIs are also known as refractory inclusions since they, which predate chondrules by ~2-3 Ma, they are among the oldest objects in the Solar SystemThe Sun and set of objects orbiting around it including planets and their moons and rings, asteroids, comets, and meteoroids. with an age of ~4.56 Ga. They formed when “dust balls” were shock heated to very high temperatures, became molten, and resolidified as  tiny droplets. Type I chondrules are FeO-poor; whereas, Type II are FeO-rich. Other chondrules are cryptocrystallineCrypto meaning "hidden" refers to a rock texture in which individual crystals are too small to be distinguished even using a standard petrographic microscope. Crystals are typically less than a few μm in size - any smaller and the texture would be considered amorphous. Among sedimentary terrestrial rocks, chert and, or show barred or radial textures. Chondrules will also have fine-grained matrixFine grained primary and silicate-rich material in chondrites that surrounds chondrules, refractory inclusions (like CAIs), breccia clasts and other constituents. rims and/or coarse-grained igneous rims as well as metal rims suggesting complex formation histories.