“CAIs formed by evaporationProcess in which atoms or molecules in a liquid state (or solid state if the substance sublimes) gain sufficient energy to enter the gaseous state. Click on Term to Read More, condensation, and aggregation in a gas of approximately solar composition in a hot (ambient temperature >1300 K) disk region exposed to irradiation by solar energetic particles, probably near the protoSun. Subsequently, some CAIs were melted in and outside their formation region during transient heating events of still unknown nature.”1

There are three types of CAIs: 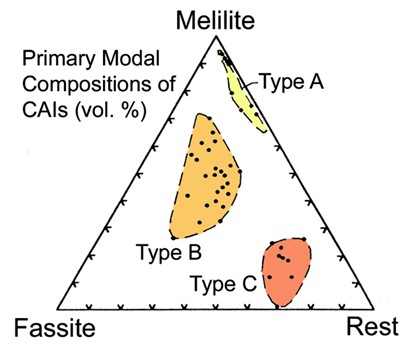