The most abundant group of minerals in Earth’s crustOutermost layer of a differentiated planet, asteroid or moon, usually consisting of silicate rock and extending no more than 10s of km from the surface. The term is also applied to icy bodies, in which case it is composed of ices, frozen gases, and accumulated meteoritic material. On Earth, the, the structure of silicates are dominated by the silicaSilicon dioxide, SiO2. tetrahedron, SiO44-, with metalElement that readily forms cations and has metallic bonds; sometimes said to be similar to a cation in a cloud of electrons. The metals are one of the three groups of elements as distinguished by their ionization and bonding properties, along with the metalloids and nonmetals. A diagonal line drawn ions occurring between tetrahedra). The mesodesmic bonds of the silicon tetrahedron allow extensive polymerizationProcess of reacting molecules together to form three-dimensional networks or chains. Silicon tetrahedra are usually polymerized in silicate minerals and melts. Classification of silicate minerals is based upon their degree of polymerization. and silicates are classified according to the amount of linking that occurs between the tetrahedra. 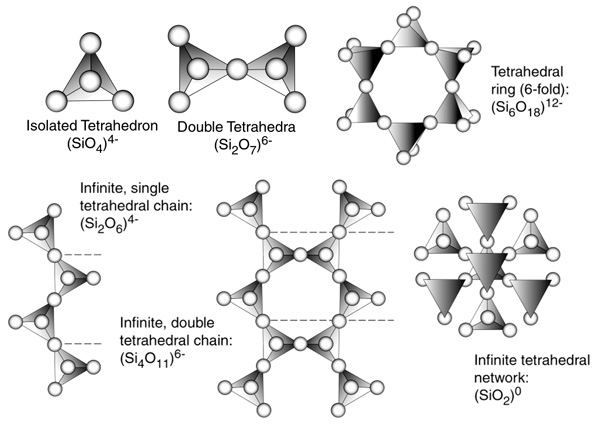 All tetrahedral structures have net negative charge (except for the silica polymorphs) and cations required to balance charges. Cations also serve to bond negatively charged structural elements such as halogens and water. One complicating factor is that Al3+ commonly substitutes for Si4+ in chain, sheet and framework silicates.