Mminerals formed exclusively from silicaSilicon dioxide, SiO2.. There are ten known silica polymorphs, two of which are synthetic. Five of the naturall polymorphs are related by reconstructive transformations and can exist metastably: stishoviteDense, high-pressure phase of quartz; so far identified only in shock-metamorphosed, quartz-bearing rocks from meteorite impact craters. Stishovite was synthesized in 1961 before it was discovered at Meteor Crater, Arizona. Its structure consists of parallel chains of single SiO6 octahedra. The octahedra are on their sides, sharing opposing edges. Image, coesiteHigh-pressure polymorph of silicon dioxide (SiO2). Has the same chemical composition as cristobalite, stishovite, seifertite and tridymite but possesses a different crystal structure. Coesite forms at intense pressures of above about 2.5 GPa (25 kbar) and temperature above about 700 °C, and was first found naturally on Earth in impact, quartzComposed of SiO2, quartz is one of the silica group minerals most common in Earth's crust, but never found in meteorites as inclusions visible to the naked eye. Quartz in meteorites has been found in very small quantities in eucrites, other calcium-rich achondrites, and in the highly reduced E chondrites1., tridymiteSilica group mineral in which the tetrahedra occur in sheets. Tetrahedra alternately point up or down to share oxygen with tetrahedra of other sheets, forming six-sided rings perpendicular the sheets. Tridymite has a fairly open structure and accommodates Na+, K+ and Ca2+; charge balance is achieved by Al3+ ↔ Si4+., and cristobaliteHigh temperature polymorph of silicon dioxide (SiO2). Has the same chemical composition as coesite, stishovite, seifertite and tridymite but possesses a different crystal structure. This silica group mineral occurs in terrestrial volcanic rocks, martian and lunar meteorites, chondrites and impact glasses like Libyan Desert Glass. Cristobalite has a very open. Conditions to form coesite and stishovite are attained only during meteoroidSmall rocky or metallic object in orbit around the Sun (or another star). impacts where there are extremely high shock pressures. 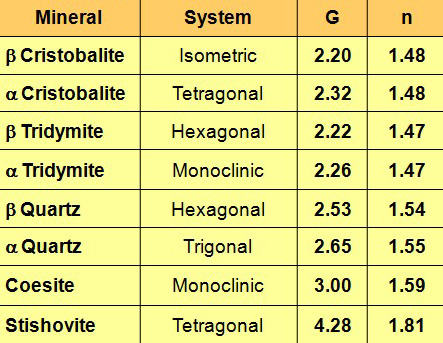 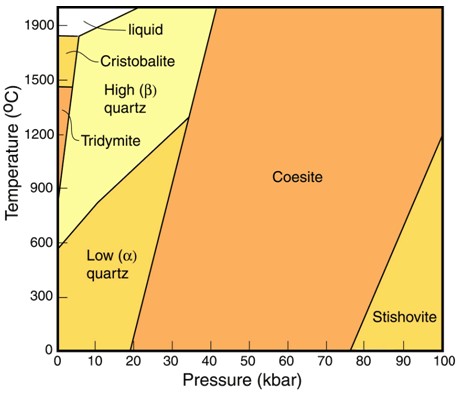 Three of these have polymorphs related by displacive transformations between low- and high-temperature forms (α and β): quartz (shown above), tridymite, and cristobalite. The low temperature forms have lower degrees of crystal symmetryProperty of an object if some spatial manipulation of it results in an indistinguishable object. A symmetric object can be superimposed on itself by some operation. than the high temperature forms.