MineralInorganic substance that is (1) naturally occurring (but does not have a biologic or man-made origin) and formed by physical (not biological) forces with a (2) defined chemical composition of limited variation, has a (3) distinctive set of of physical properties including being a solid, and has a (4) homogeneous generally found in terrestrial metamorphicRocks that have recrystallized in a solid state due to changes in temperature, pressure, and chemical environment. rocks, although igneous examples are not uncommon. Garnet is a significant reservoir of Al in the Earth’s upper mantleMain silicate-rich zone within a planet between the crust and metallic core. The mantle accounts for 82% of Earth's volume and is composed of silicate minerals rich in Mg. The temperature of the mantle can be as high as 3,700 °C. Heat generated in the core causes convection currents in.

The general formula of garnet is A3B2(SiO4)3. However, Ca2+ cation is appreciably larger than the Mg2+, Fe2+, and Mn2+ cations (100 pm vs. 72 to 83 pm), resulting in separate mineralogical series of Ca-rich and Ca-poor garnets.

Ca-rich garnet comprise the ugrandite series; Ca-poor garnet form the pyralspite series. The ugrandite series gets is name from the main minerals in it: uvarovite, Ca3Cr2(SiO4)3, grossular, Ca3Al2(SiO4)3, and andradite, Ca3Fe3+2(SiO4)3. Site occupancies are: A = Ca2+, B = Al3+, Cr3+, Fe3+. The names based upon the B site occupancy. Grossular-andradite forms a complete solid solid solutionCompositional variation resulting from the substitution of one ion or ionic compound for another ion or ionic compound in an isostructural material. This results in a mineral structure with specific atomic sites occupied by two or more ions or ionic groups in variable proportions. Solid solutions can be complete (with. The pyralspite series name is also based upon its minerals: pyrope, Mg3Al2(SiO4)3, almandine, Fe3Al2(SiO4)3, and spessartine, Mn3Al2(SiO4)3. Site occupancies are: A = Mg2+, Fe2+, and Mn2+, B = Al3+. The names based upon the A site occupancy. Pyrope-almandine and almandine-spessartine form complete solid solutions. 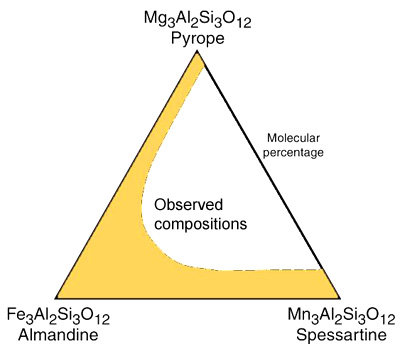 There is limited solid solution between the pyralspite and ugrandite series as shown below. 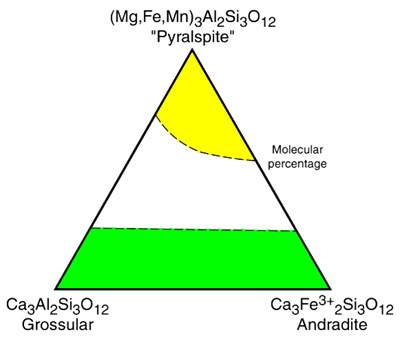 There are many types of synthetic garnets. The gadolinium gallium garnet (GGG), Gd3Ga2(GaO4)3 is used in magnetic bubble memories, and the yttrium aluminum garnet (YAG), Y3Al2(AlO4)3 isd used for synthetic gemstones and as lasing medium in lasers (doped with Nd3+).