Ordinary chondritesChondrites are the most common meteorites accounting for ~84% of falls. Chondrites are comprised mostly of Fe- and Mg-bearing silicate minerals (found in both chondrules and fine grained matrix), reduced Fe/Ni metal (found in various states like large blebs, small grains and/or even chondrule rims), and various refractory inclusions (such (OCs) are the largest meteoriteWork in progress. A solid natural object reaching a planet’s surface from interplanetary space. Solid portion of a meteoroid that survives its fall to Earth, or some other body. Meteorites are classified as stony meteorites, iron meteorites, and stony-iron meteorites. These groups are further divided according to their mineralogy and clan, comprising approximately 87% of the global collection and 78% of all falls (Meteoritical Society database 2018)1.

Meteorites & the Early Solar SystemThe Sun and set of objects orbiting around it including planets and their moons and rings, asteroids, comets, and meteoroids.: page 581 section 6.1
OC of type 5 or 6 with an apparent shock stageA petrographic assessment, using features observed in minerals grains, of the degree to which a meteorite has undergone shock metamorphism. The highest stage observed in 25% of the indicator grains is used to determine the stage. Also called "shock level".               of S1, reveal evidence of annealing due to a previous intense shock. This observation demonstrates that ordinary chondrites experienced a more complex metamorphicRocks that have recrystallized in a solid state due to changes in temperature, pressure, and chemical environment. history where shock heating also played a significant role.

OC chondriteChondrites are the most common meteorites accounting for ~84% of falls. Chondrites are comprised mostly of Fe- and Mg-bearing silicate minerals (found in both chondrules and fine grained matrix), reduced Fe/Ni metal (found in various states like large blebs, small grains and/or even chondrule rims), and various refractory inclusions (such chondrulesRoughly spherical aggregate of coarse crystals formed from the rapid cooling and solidification of a melt at  ~1400 ° C. Large numbers of chondrules are found in all chondrites except for the CI group of carbonaceous chondrites. Chondrules are typically 0.5-2 mm in diameter and are usually composed of olivine have densitiesMass of an object divided by its volume. Density is a characteristic property of a substance (rock vs. ice, e.g.). Some substances (like gases) are easily compressible and have different densities depending on how much pressure is exerted upon them. The Sun is composed of compressible gases and is much between 3.15 and 3.26 g/cm3, as may be expected from their mineralInorganic substance that is (1) naturally occurring (but does not have a biologic or man-made origin) and formed by physical (not biological) forces with a (2) defined chemical composition of limited variation, has a (3) distinctive set of of physical properties including being a solid, and has a (4) homogeneous and glass compositions2.

The properties of ordinary chondrites (OC) reflect both nebular and asteroidal processes.

Ordinary Chondrites consist primarily of olivineGroup of silicate minerals, (Mg,Fe)2SiO4, with the compositional endpoints of forsterite (Mg2SiO4) and fayalite (Fe2SiO4). Olivine is commonly found in all chondrites within both the matrix and chondrules, achondrites including most primitive achondrites and some evolved achondrites, in pallasites as large yellow-green crystals (brown when terrestrialized), in the silicate portion (40% to 50%), pyroxeneA class of silicate (SiO3) minerals that form a solid solution between iron and magnesium and can contain up to 50% calcium. Pyroxenes are important rock forming minerals and critical to understanding igneous processes. For more detailed information, please read the Pyroxene Group article found in the Meteoritics & Classification category. (15% to 25%), Fe/Ni alloys of kamaciteMore common than taenite, both taenite and kamacite are Ni-Fe alloys found in iron meteorites. Kamacite, α-(Fe,Ni), contains 4-7.5 wt% Ni, and forms large body-centered cubic crystals that appear like broad bands or beam-like structures on the etched surface of a meteorite; its name is derived from the Greek word and taeniteLess common than kamacite, both taenite and kamacite are Ni-Fe alloys found in iron meteorites. Taenite, γ-(Fe,Ni), has 27-65 wt% Ni, and forms small crystals that appear as highly reflecting thin ribbons on the etched surface of a meteorite; the name derives from the Greek word for "ribbon." (2% to 25%), and other accessory minerals like feldspars, troiliteBrass colored non-magnetic mineral of iron sulfide, FeS, found in a variety of meteorites., chromiteBrownish-black oxide of chromium and iron (Cr-Fe oxide), Cr2FeO4, found in many meteorite groups., . Like all other chondritic meteorites (except CI chondrites), OCs contain chondrules that are distinct and sharply defined within the matrixFine grained primary and silicate-rich material in chondrites that surrounds chondrules, refractory inclusions (like CAIs), breccia clasts and other constituents. for low petrologic types (type 3) or poorly defined for high petrologic types (type 6) that experienced high thermal metamorphism. Similarly, chondrules are progressively abraded and finally destroyed with increasing degrees of impact shock.

It is now understood that space weathering processes are responsible for the spectral mismatch between S-type bodies and OCs. Furthermore, both telescopic observations and the first asteroid sample return mission (Hayabusa) indicate that most S-type bodies have mineralogies similar to those of OCs. Importantly, the S-type/OC link has been delivering fundamental constraints on the formation and evolution of planetesimalsHypothetical solid celestial body that accumulated during the last stages of accretion. These bodies, from ~1-100 km in size, formed in the early solar system by accretion of dust (rock) and ice (if present) in the central plane of the solar nebula. Most planetesimals accreted to planets, but many – over the recent years.

Ordinary chondrite meteorites (OCs) are silicate-rich meteorites composed mostly of olivine and low calcium pyroxene that are by far the most abundant meteorites (80% of all falls; Hutchison 2004). They have been subdivided into three groups (H, L and LL) based on variations in bulk composition, such as molecular ratios [FeO ⁄ (FeO+MgO)] in olivine and pyroxene (Mason 1963, Keil & Fredriksson 1964) and the ratio of metallic Fe to total Fe (Dodd et al. 1967) (Table 1).

H chondrites have the highest total abundance of Fe (and the highest Fe/Si atomic ratio) among OCs (H stands for « High » Fe). They are also the most reduced OCs, their iron being mostly in metallic form. When equilibrated, they exhibit the lowest FeO contents in their silicates.

L chondrites (Low in total iron) are intermediate between H and LLs in all these properties – somewhat closer to LLs in terms of total Fe.

LL chondrites contain the least total Fe, corresponding to the lowest Fe/Si atomic ratio, and they are the most oxidized OCs, with little metalElement that readily forms cations and has metallic bonds; sometimes said to be similar to a cation in a cloud of electrons. The metals are one of the three groups of elements as distinguished by their ionization and bonding properties, along with the metalloids and nonmetals. A diagonal line drawn and with the silicates that have the highest FeO contents when equilibrated. They are « Low » in total iron, « Low » in metal, hence the LL denomination.

H and LL chondrites also differ in terms of oxygenElement that makes up 20.95 vol. % of the Earth's atmosphere at ground level, 89 wt. % of seawater and 46.6 wt. % (94 vol. %) of Earth's crust. It appears to be the third most abundant element in the universe (after H and He), but has an abundance only isotopes, with LL chondrites containing a very small but measurable depletion of 16O with respect to the other two isotopes compared to H chondrites.

ordinary chondrite: A major class of chondrites, distinguished by sub-solar Mg/Si and refractory/Si ratios, oxygen isotopeOne of two or more atoms with the same atomic number (Z), but different mass (A). For example, hydrogen has three isotopes: 1H, 2H (deuterium), and 3H (tritium). Different isotopes of a given element have different numbers of neutrons in the nucleus. compositions that plot above the terrestrial fractionationConcentration or separation of one mineral, element, or isotope from an initially homogeneous system. Fractionation can occur as a mass-dependent or mass-independent process. line, and a large volume percentage of chondrules, with only 10-15 vol% fine-grained matrix.

H group: The high-iron (H) chemical group of ordinary chondrites, distinguished by their high siderophile elementLiterally, "iron-loving" element that tends to be concentrated in Fe-Ni metal rather than in silicate; these are Fe, Co, Ni, Mo, Re, Au, and PGE. These elements are relatively common in undifferentiated meteorites, and, in differentiated asteroids and planets, are found in the metal-rich cores and, consequently, extremely rare on content, relatively small chondrules (~0.3 mm), and oxygen isotope compositions that are closer to the terrestrial fractionation line than those of other ordinary chondrites.

L group: The low-iron (L) chemical group of ordinary chondrites, distinguished by their relatively low siderophile elementSubstance composed of atoms, each of which has the same atomic number (Z) and chemical properties. The chemical properties of an element are determined by the arrangement of the electrons in the various shells (specified by their quantum number) that surround the nucleus. In a neutral atom, the number of content, moderate sized chondrules (~0.7 mm), and oxygen isotope compositions that intermediate between H and LL group ordinary chondrites.

LL group: The low-iron, low metal (LL) chemical group of ordinary chondrites, distinguished by their low siderophile element content, fairly large chondrules (~0.9 mm), and oxygen isotope compositions that are further above the terrestrial fractionation line than those of other ordinary chondrites. 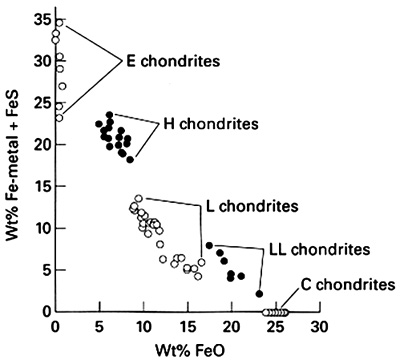 Subtypes of ordinary chondrites are determined using the petrographic criteria given in the table below.

CriterionPetrologic Type
3456
Olivine & Pyroxene Homogeneity> 5 % mean deviationhomogeneous
FeldsparAn alumino-silicate mineral containing a solid solution of calcium, sodium and potassium. Over half the Earth’s crust is composed of feldspars and due to their abundance, feldspars are used in the classification of igneous rocks. A more complete explanation can be found on the feldspar group page.
minor primary in 3; increase from <5 mm in 3 to >50 mm in 6

ChondruleRoughly spherical aggregate of coarse crystals formed from the rapid cooling and solidification of a melt at  ~1400 ° C. Large numbers of chondrules are found in all chondrites except for the CI group of carbonaceous chondrites. Chondrules are typically 0.5-2 mm in diameter and are usually composed of olivine & Matrix Glasspresent in decreasing abundance in 3; devitrified to absent in
4 to 6
Matrixfine grained, clastic, minor opaque in 3; recrystallized, coarsening in 4 to 6
Chondrule Definition & Abundancesharply defined in 3; become more diffuse and less abundant in 4 to 6

The division for subtypes 3.2 and below are made using the average concentration and standard deviation of Cr2O3 contents in olivine (Grossman & Brearley, 2005). 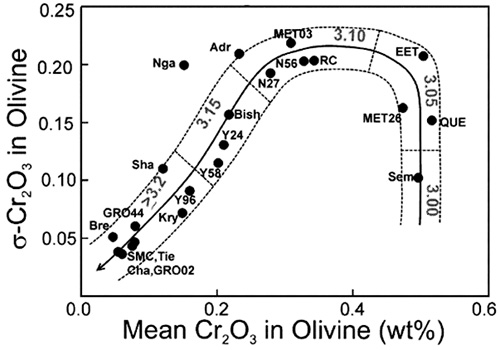