A process by which a generally homogeneous chondritic body containing mostly metalElement that readily forms cations and has metallic bonds; sometimes said to be similar to a cation in a cloud of electrons. The metals are one of the three groups of elements as distinguished by their ionization and bonding properties, along with the metalloids and nonmetals. A diagonal line drawn, silicates and sulfides will melt and form distinct (differentiated) layers of different densitiesMass of an object divided by its volume. Density is a characteristic property of a substance (rock vs. ice, e.g.). Some substances (like gases) are easily compressible and have different densities depending on how much pressure is exerted upon them. The Sun is composed of compressible gases and is much.   When the melting process continues for a long enough period of time, the once chondritic body will re-partition into layers of different composition including a metallic coreIn the context of planetary formation, the core is the central region of a large differentiated asteroid, planet or moon and made up of denser materials than the surrounding mantle and crust. For example, the cores of the Earth, the terrestrial planets and differentiated asteroids are rich in metallic iron-nickel. and a silicate-rich mantleMain silicate-rich zone within a planet between the crust and metallic core. The mantle accounts for 82% of Earth's volume and is composed of silicate minerals rich in Mg. The temperature of the mantle can be as high as 3,700 °C. Heat generated in the core causes convection currents in and crustOutermost layer of a differentiated planet, asteroid or moon, usually consisting of silicate rock and extending no more than 10s of km from the surface. The term is also applied to icy bodies, in which case it is composed of ices, frozen gases, and accumulated meteoritic material. On Earth, the. A principal source of heat driving the melting process was the radioactive decayProcess in which an isotope's nucleus changes ('decays') to produce another isotope. The original atom is called the 'parent' and the resulting atom, the 'daughter'. There are three modes of radioactive decay: • Emission of a particle (He nucleus) that decreases the atomic number (Z) by 2 and the atomic of  26Al, an  isotopeOne of two or more atoms with the same atomic number (Z), but different mass (A). For example, hydrogen has three isotopes: 1H, 2H (deuterium), and 3H (tritium). Different isotopes of a given element have different numbers of neutrons in the nucleus. of aluminum, into a stable nuclideA nuclear species characterized by Z protons and N neutrons. of 26Mg. 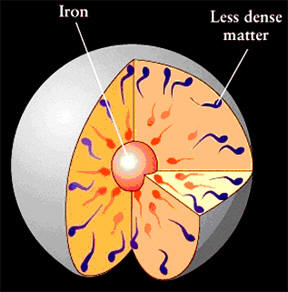 Heating of the primordial mixture of stony minerals, metals, and sulfides produced dense metallic liquids which sank to become planetary or asteroidal cores. Less dense silicateThe most abundant group of minerals in Earth's crust, the structure of silicates are dominated by the silica tetrahedron, SiO44-, with metal ions occurring between tetrahedra). The mesodesmic bonds of the silicon tetrahedron allow extensive polymerization and silicates are classified according to the amount of linking that occurs between the magmas rose and solidified to become basaltic or, on Earth, granitic crust. Material with neutral buoyancy formed planetary mantles.