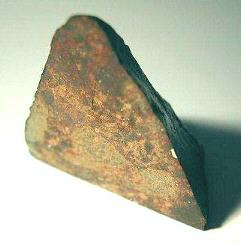 Found 1996
27° 27′ 12′ N., 16° 18′ 46′ E. A single 837 g stone was found on the 4,000 km² Dar al Gani plateau in the Libyan Sahara Desert. Analysis and classification were completed at the Institut für Planetologie, Münster, Germany (D. Weber, K. Pollok, A. Jäckel, L. Niemann, T. Grund, and A. Bischoff). Dar al Gani 222 is a typical member of the low-Fe, low-metal chondriteChondrites are the most common meteorites accounting for ~84% of falls. Chondrites are comprised mostly of Fe- and Mg-bearing silicate minerals (found in both chondrules and fine grained matrix), reduced Fe/Ni metal (found in various states like large blebs, small grains and/or even chondrule rims), and various refractory inclusions (such group, having a high Fa (29.5) and Fs (25.1) content. This reflects the incorporation of much of the available metalElement that readily forms cations and has metallic bonds; sometimes said to be similar to a cation in a cloud of electrons. The metals are one of the three groups of elements as distinguished by their ionization and bonding properties, along with the metalloids and nonmetals. A diagonal line drawn into the silicates. This LL ordinary chondriteWork in Progress Ordinary chondrites (OCs) are the largest meteorite clan, comprising approximately 87% of the global collection and 78% of all falls (Meteoritical Society database 2018)1. Meteorites & the Early Solar System: page 581 section 6.1 OC of type 5 or 6 with an apparent shock stage of S1, is a brecciaWork in Progress ... A rock that is a mechanical mixture of different minerals and/or rock fragments (clasts). A breccia may also be distinguished by the origin of its clasts: (monomict breccia: monogenetic or monolithologic, and polymict breccia: polygenetic or polylithologic). The proportions of these fragments within the unbrecciated material consisting of both petrologic typeMeasure of the degree of aqueous alteration (Types 1 and 2) and thermal metamorphism (Types 3-6) experienced by a chondritic meteorite. Type 3 chondrites are further subdivided into 3.0 through 3.9 subtypes. 5 and 6 components including impact-melt phases and shock veins (S3), and has been weathered to grade W3.

The photo shown above is a 16.4 g end section exhibiting the brecciated texture of this meteoriteWork in progress. A solid natural object reaching a planet’s surface from interplanetary space. Solid portion of a meteoroid that survives its fall to Earth, or some other body. Meteorites are classified as stony meteorites, iron meteorites, and stony-iron meteorites. These groups are further divided according to their mineralogy and. The photo below shows this same end section along with two large slices of DaG 222 once offered for sale by Walter and Niki Zeitschel of Hanau, Germany. 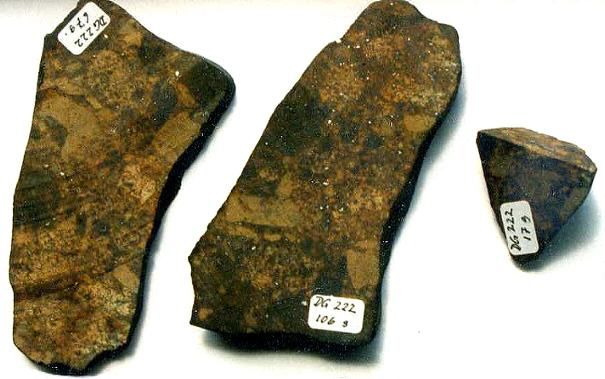