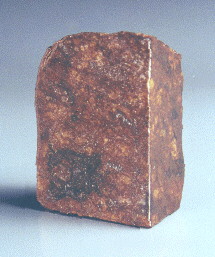 Found 1995
27° 02.44′ N., 16° 24.26′ E. Two paired stones of this ureilite were found on the Dar al Gani plateau in the Sahara Desert, which have a total weight of 277 g. The brecciated, highly-shocked DaG 084 exhibits mosaicism in its olivines and has experienced heavy terrestrial weathering consistent with grade W3. The meteoriteWork in progress. A solid natural object reaching a planet’s surface from interplanetary space. Solid portion of a meteoroid that survives its fall to Earth, or some other body. Meteorites are classified as stony meteorites, iron meteorites, and stony-iron meteorites. These groups are further divided according to their mineralogy and Click on Term to Read More belongs to Berkley’s fayalite-rich subgroup I, having a Mg# in the range of Fo76–87. This ureilite is probably paired with the polymict ureilites DaG 164 (57 g) and DaG 165 (32 g), and possibly with numerous other monomict and polymict named masses found in close proximity. All of these individual stones might represent the breakup of a >7 kg polymict regolithMixture of unconsolidated rocky fragments, soil, dust and other fine granular particles blanketing the surface of a body lacking an atmosphere. Regolith is the product of "gardening" by repeated meteorite impacts, and thermal processes (such as repeated heating and cooling cycles).   Click on Term to Read More fragment (Downes et al., 2010).

A Mn–Cr isotopic study was conducted by Shukolykov and Lugmair (2006) on the possibly paired polymict ureilite DaG 165 and some others. Their results indicate that DaG 165 last equilibrated very early in Solar SystemThe Sun and set of objects orbiting around it including planets and their moons and rings, asteroids, comets, and meteoroids. history, ~4.562 b.y. ago, which is much earlier than Kenna. Three volatile-rich CI-like clasts present in DaG 165 were studied by Patzek et al. (2018). They found that these fine-grained hydrous clasts are highly enriched in D (δD up to +1000‰) and plot along an extension of the CCAM line on an O-isotopic diagram (see diagram below). The heavier bulk oxygenElement that makes up 20.95 vol. % of the Earth's atmosphere at ground level, 89 wt. % of seawater and 46.6 wt. % (94 vol. %) of Earth's crust. It appears to be the third most abundant element in the universe (after H and He), but has an abundance only Click on Term to Read More composition of these clasts is derived from the incorporation of 16O-poor ices from the outer solar systemDefinable part of the universe that can be open, closed, or isolated. An open system exchanges both matter and energy with its surroundings. A closed system can only exchange energy with its surroundings; it has walls through which heat can pass. An isolated system cannot exchange energy or matter with. A meteorite sample with a mineralogy and isotopic composition similar to these clasts has not yet been recovered. 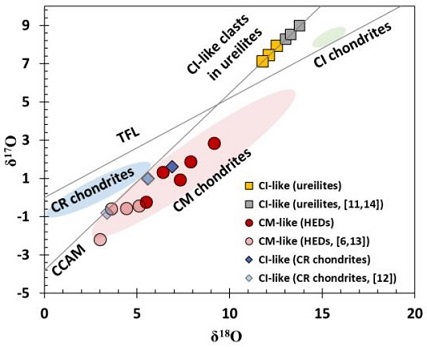 Diagram credit: Patzek et al., 81st MetSoc, #6254 (2018) In an attempt to identify possible common ejection events among the ureilites, Beard and Swindle (2017) conducted a comparative study of 39 different samples utilizing three parameters: CRE age, Fo content in olivineGroup of silicate minerals, (Mg,Fe)2SiO4, with the compositional endpoints of forsterite (Mg2SiO4) and fayalite (Fe2SiO4). Olivine is commonly found in all chondrites within both the matrix and chondrules, achondrites including most primitive achondrites and some evolved achondrites, in pallasites as large yellow-green crystals (brown when terrestrialized), in the silicate portion Click on Term to Read More (Mg#), and Δ17O value. They resolved ten potential clusters, several of which show concordance in their CRE age and Mg# but not in Δ17O value (heterogeneous), and three that are concordant in all three parameters (homogeneous). One of the homogeneous clusters reflects an ejection event that occurred 20.1 (±1.2) m.y. ago and comprises DaG 084, DaG 319, Goalpara, and Haverö; however, the Δ17O values for DaG 084 and DaG 319 have not yet been determined. The CRE age of this cluster is consistent with the average of all CRE age results obtained to date of 19.7 (±2.8) m.y. (Riebe et al., 2017). Current theories of ureilite formation are presented on the Kenna and Almahata Sitta pages. The photo above shows the cut face of this 15.6 g DaG 084 specimen. The photo below shows the outer surface where remnant fusion crustMelted exterior of a meteorite that forms when it passes through Earth’s atmosphere. Friction with the air will raise a meteorite’s surface temperature upwards of  4800 K (8180 °F) and will melt (ablate) the surface minerals and flow backwards over the surface as shown in the Lafayette meteorite photograph below. Click on Term to Read More has been affected by desert varnish, while light-colored desert soil still adheres to the part of the stone that laid beneath the surface.