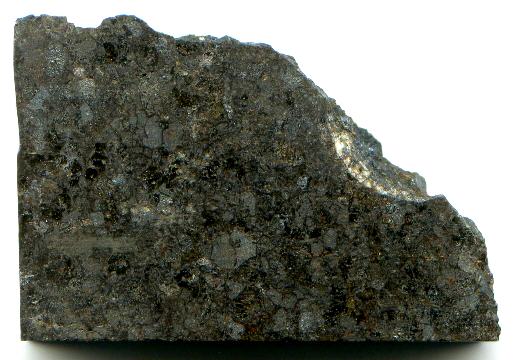 Found February 1972
33° 54′ N., 103° 33.2′ W. A single stone of 10.9 kg was found in Roosevelt County, New Mexico by Ivan ‘Skip’ Wilson on his ranch. It is composed mainly of olivineGroup of silicate minerals, (Mg,Fe)2SiO4, with the compositional endpoints of forsterite (Mg2SiO4) and fayalite (Fe2SiO4). Olivine is commonly found in all chondrites within both the matrix and chondrules, achondrites including most primitive achondrites and some evolved achondrites, in pallasites as large yellow-green crystals (brown when terrestrialized), in the silicate portion and the calcium-poor pyroxeneA class of silicate (SiO3) minerals that form a solid solution between iron and magnesium and can contain up to 50% calcium. Pyroxenes are important rock forming minerals and critical to understanding igneous processes. For more detailed information, please read the Pyroxene Group article found in the Meteoritics & Classification category., pigeonite, in a black carbon-rich matrixFine grained primary and silicate-rich material in chondrites that surrounds chondrules, refractory inclusions (like CAIs), breccia clasts and other constituents. containing graphiteOpaque form of carbon (C) found in some iron and ordinary chondrites and in ureilite meteorites. Each C atom is bonded to three others in a plane composed of fused hexagonal rings, just like those in aromatic hydrocarbons. The two known forms of graphite, α (hexagonal) and β (rhombohedral), have, lonsdaleiteHexagonal polymorph of carbon (C) that forms from meteoric graphite during impact. The immense heat and stress of the impact transforms the graphite into diamond, but retains graphite's hexagonal crystal lattice (below). Lonsdaleite was first identified from the Canyon Diablo meteorite at Barringer Crater (also known as Meteor Crater) in, and diamondOne of the naturally occurring forms of carbon found in meteorites. Each C atom is bonded through covalent sp3 hydrid orbitals to four others. The strength of the C-C bonds makes diamond the hardest naturally occurring substance (according to the Mohs scale) in terms of resistance to scratching. There are. Melt pockets and secondary veins contain grains of Ca-rich augiteHigh-Ca clinopyroxene, (Ca,Mg,Fe)SiO3, that occurs in many igneous rocks, particularly those of basaltic composition. In order to be considered augite, the clinopyroxene must contain 20 to 45 mol % of calcium (Wo20 - 45). An important and unique Martian meteorite is NWA 8159, that has been classified as an augite basalt., andesine, K-feldspar, diopside, and chromiteBrownish-black oxide of chromium and iron (Cr-Fe oxide), Cr2FeO4, found in many meteorite groups..

An initial classification scheme was proposed by Berkley et al. (1980) in which the main group ureilites were subdivided into three distinct compositional subgroups based on the FeO/MgO ratio in olivine, expressed as mol% Fo (=Mg#):

Subsequent studies of a larger sample set indicates that these FeO/MgO ratios might actually represent a continuum. More recently, Goodrich et al. (2002, 2004) have proposed a model to describe the petrogenesis of this meteoriteWork in progress. A solid natural object reaching a planet’s surface from interplanetary space. Solid portion of a meteoroid that survives its fall to Earth, or some other body. Meteorites are classified as stony meteorites, iron meteorites, and stony-iron meteorites. These groups are further divided according to their mineralogy and group; some details from their model are included here. Their model recognizes three mineralogical types of monomict/unbrecciated ureilites:

Paradoxically, the pressure-controlled smelting model shows that ureilites in our collections are biased in sampling only a thin layer at intermediate depth within the pre-impact parent bodyThe body from which a meteorite or meteoroid was derived prior to its ejection. Some parent bodies were destroyed early in the formation of our Solar System, while others like the asteroid 4-Vesta and Mars are still observable today., which exhibits a spike at Fo76–81 (Warren, 2012). A model of gasless anatexis (magmatism) is consistent with high internal pressures, suggesting a relatively large pre-impact parent body of at least 400 km in diameter. Efforts continue in ernest to constrain the numerous parameters of the ureilite petrogenetic history by employing numerical modeling (e.g., Michel et al., 2013 #1300) including the following:

Kenna is a member of Berkley’s least reducedOxidation and reduction together are called redox (reduction and oxidation) and generally characterized by the transfer of electrons between chemical species, like molecules, atoms or ions, where one species undergoes oxidation, a loss of electrons,  while another species undergoes reduction, a gain of electrons. This transfer of electrons between reactants subgroup I, being FeO-rich with a high fayalitePure* iron end-member (Fe2SiO4) of the olivine solid solution series and an important mineral in meteorites. When iron (Fe) is completely substituted by magnesium, it yields the the pure Mg-olivine end-member, forsterite (Mg2SiO4). The various Fe and Mg substitutions between these two end-members are described based on their forsteritic (Fo) content (Fo~79). It is proposed that members of this subgroup formed early at the deepest layers, and are associated with the highest C content. It also belongs to Goodrich’s subgroup 1, having a composition consisting primarily of olivine and pigeonite. Goodrich et al. (2002; 2004) described a stratification of the ureilite precursor material consistent with the existence of both magnesian (shallower) and ferroan (deeper) ureilites. This stratification is thought to have been originally established through pre-igneous aqueous flows allowing for the heterogeneous distribution of unfractionated O-isotopes, as well as the concentration of other mineralInorganic substance that is (1) naturally occurring (but does not have a biologic or man-made origin) and formed by physical (not biological) forces with a (2) defined chemical composition of limited variation, has a (3) distinctive set of of physical properties including being a solid, and has a (4) homogeneous elements such as Ca.

Evidence shows that the ureilite parent asteroid must have accreted from an ~80:20 mixture of silicates and ice early in Solar SystemThe Sun and set of objects orbiting around it including planets and their moons and rings, asteroids, comets, and meteoroids. history ~0.55 m.y. after CAISub-millimeter to centimeter-sized amorphous objects found typically in carbonaceous chondrites and ranging in color from white to greyish white and even light pink. CAIs have occasionally been found in ordinary chondrites, such as the L3.00 chondrite, NWA 8276 (Sara Russell, 2016). CAIs are also known as refractory inclusions since they formation, and that it experienced rapid melting primarily from the heat of 26Al decay. Production of an abundant volume of melt was initiated by ~1 m.y. after CAI formation as temperatures reached 1050°C, and this melt production continued by progressively declining degrees over the next ~4 m.y., at which time an overall degree of melting of 30% was achieved. Their model demonstrates that during the early stage of radiogenic heating, as the degree of melting reached 0.15%, the melt was rapidly buoyed upwards through an interconnected network of veins and fractures, these thought to be largely created during the previous hydrationReaction of a substance with water. and dehydration phases on the asteroid. The size of the veins constituting this hierarchical network ranged from 1 mm at grain boundaries at the melt initiation depths, to sizes of over 10 km as the majority of the melt was efficiently lost into space through dikes during episodic explosive volcanism. The speed of the rising melt was bolstered by high volumes of smelting-produced CO+CO2 gas to easily exceed the escape velocityVelocity that an object needs to escape the primary gravitational influence of a more massive object: where, m = the object's mass, r = distance from object's center, and G = gravitational constant of the larger object.. The entire journey of this melt through the network from grain boundary until extraction from the UPB is calculated to have taken a month at its peak, or only slightly longer thereafter. However, ~15–25% of the total melt volume is expected to have been retained within an extensive asteroid-wide systemDefinable part of the universe that can be open, closed, or isolated. An open system exchanges both matter and energy with its surroundings. A closed system can only exchange energy with its surroundings; it has walls through which heat can pass. An isolated system cannot exchange energy or matter with of perhaps five sill-like intrusions located ~7 km beneath the cold, unmelted outer crustOutermost layer of a differentiated planet, asteroid or moon, usually consisting of silicate rock and extending no more than 10s of km from the surface. The term is also applied to icy bodies, in which case it is composed of ices, frozen gases, and accumulated meteoritic material. On Earth, the, each reservoir extending ~4.7 km × ~144 km. It was shown that a large percentage of this sill component (~76%) likely represents melt from deeper, gas-poor, more ferroan source regions. Such a source region would be consistent with a scenario for the origin of the feldspathic clasts found in polymict ureilites, given their formation ~1 m.y. after CAIs and their accumulation into a near-surface intrusion, where they underwent slow cooling and closure over the next ~4 m.y. Consistent with the large sampling of ureilites studied, it was calculated that these rocks represent strataOriginally horizontal layers of rock. located at depths of between ~10 km and ~50 km, corresponding to pressures of 3 MPa (most magnesian) and 10 MPa (most ferroan), respectively, on an asteroid ~100 km in radius (arguably the radius was between ~20 km and ~475 km). Pressures at its center are estimated to have been ~15.2–26.6 MPa. Melting and smelting are initiated at different times depending on depth. At the shallowest levels where pressures are lowest, ~3 MPa, melting and smelting occur simultaneously as temperatures reach ~1060°C, producing pigeonite residues corresponding to an increase in Mg# from ~62 to 86. This is followed by orthopyroxene production resulting in further progressive increases in Mg# up to ~91, at which point melting and smelting institute pigeonite production again. At increasing depths, smelting begins progressively later than the onset of melting. At the greatest depths inferred for ureilites, corresponding to ~10 MPa of pressure, smelting begins after a temperature of 1200°C is reached, at a point when 21% partial melting has occurred. The production of pigeonite residues is initiated as augite is successively removed through the melt phase. Complete removal of augite occurs at ~30% melting, having attained a molar Fo content of ~76; orthopyroxene production begins thereafter. If ureilite samples should be found from even greater depths, corresponding to pressures greater than ~12.5 MPa, it is predicted that they will be composed entirely of augite and that no smelting will have occurred. The metallic iron that was produced as an end product of the smelting process is believed to have settled into a central core with a radius of ~41 km.