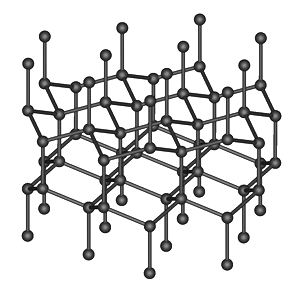 Hexagonal polymorph of carbonElement commonly found in meteorites, it occurs in several structural forms (polymorphs). All polymorphs are shown to the left with * indicating that it been found in meteorites and impact structures: a. diamond*; b. graphite*; c. lonsdalite*; d. buckminsterfullerene* (C60); e. C540; f. C70; g. amorphous carbon; h. carbon nanotube*. (C) that forms from meteoric graphiteOpaque form of carbon (C) found in some iron and ordinary chondrites and in ureilite meteorites. Each C atom is bonded to three others in a plane composed of fused hexagonal rings, just like those in aromatic hydrocarbons. The two known forms of graphite, α (hexagonal) and β (rhombohedral), have during impact. The immense heat and stress of the impact transforms the graphite into diamondOne of the naturally occurring forms of carbon found in meteorites. Each C atom is bonded through covalent sp3 hydrid orbitals to four others. The strength of the C-C bonds makes diamond the hardest naturally occurring substance (according to the Mohs scale) in terms of resistance to scratching. There are, but retains graphite’s hexagonal crystal latticeAtoms or groups of atoms repeated at regular intervals in three dimensions with the same orientation. One may regard each atom or group of atoms as occurring at a point and the resulting collection of points is the space lattice or lattice of the crystal. (below). Lonsdaleite was first identified from the Canyon Diablo meteoriteWork in progress. A solid natural object reaching a planet’s surface from interplanetary space. Solid portion of a meteoroid that survives its fall to Earth, or some other body. Meteorites are classified as stony meteorites, iron meteorites, and stony-iron meteorites. These groups are further divided according to their mineralogy and at Barringer CraterBest known and best preserved impact crater on Earth. The crater is named after Daniel Barringer and still owned by his family and also known as Meteor Crater, Coon Butte, and Canyon Diablo (www.barringercrater.com). Measuring 1.2 km across and 175 m deep, with a rim 45 m higher on average (also known as MeteorHow long Sonic booms Of the several 10s of tons of cosmic material entering Earth's atmosphere each day, only about one ton reaches the surface. An object's chance of survival depends on its initial mass, speed and angle of entry, and friability (tendency to break up). Micrometeoroids radiate heat so CraterBowl-like depression ("crater" means "cup" in Latin) on the surface of a planet, moon, or asteroid. Craters range in size from a few centimeters to over 1,000 km across, and are mostly caused by impact or by volcanic activity, though some are due to cryovolcanism.) in Arizona in 1967. Named after first woman president of the International Union of Crystallography, Dame Kathleen Lonsdale (28 January 1903 – 1 April 1971).