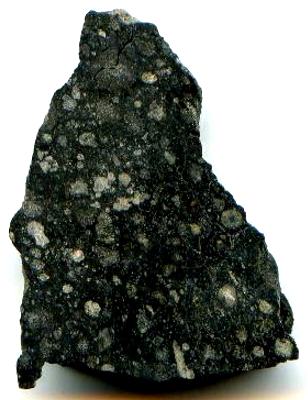 The CV-oxidized and CV-reduced subgroups are separated on the basis of metalElement that readily forms cations and has metallic bonds; sometimes said to be similar to a cation in a cloud of electrons. The metals are one of the three groups of elements as distinguished by their ionization and bonding properties, along with the metalloids and nonmetals. A diagonal line drawn Click on Term to Read More abundances and the Ni content of sulfide (Howard et al., 2010). The previously used discriminator, magnetiteFe oxide, Fe2+Fe3+2O4, containing oxidized iron (Fe3+) found in the matrix of carbonaceous chondrites and as diagnostic component in CK chondrites. In CK chondrites, magnetite is typically chromian, containing several wt. % Cr2O3. Click on Term to Read More abundance, has been shown to overlap between oxidizedOxidation and reduction together are called redox (reduction and oxidation) and generally characterized by the transfer of electrons between chemical species, like molecules, atoms or ions, where one species undergoes oxidation, a loss of electrons,  while another species undergoes reduction, a gain of electrons. This transfer of electrons between reactants Click on Term to Read More and reduced subgroups. The oxidized-Bali subgroup has a higher degree of aqueous alteration than oxidized-Allende. The subgroups reflect varying degrees of aqueous/oxidative alteration, which has been found to be correlated with the amount of ice-bearing matrixFine grained primary and silicate-rich material in chondrites that surrounds chondrules, refractory inclusions (like CAIs), breccia clasts and other constituents. Click on Term to Read More that was initially accreted (Ebel et al., 2009). For more mineralogical relationships, see Appendix I, Carbonaceous Chondrites).

Some investigators (e.g., Greenwood et al., 2003 and Wasson et al., 2013) have proposed that the CK chondritesChondrites are the most common meteorites accounting for ~84% of falls. Chondrites are comprised mostly of Fe- and Mg-bearing silicate minerals (found in both chondrules and fine grained matrix), reduced Fe/Ni metal (found in various states like large blebs, small grains and/or even chondrule rims), and various refractory inclusions (such Click on Term to Read More could represent an extension of the CV group. This subgroup is considered to reflect varying degrees of metamorphism including impact-generated crushing, thermal alteration, and recrystallization processes (Wasson et al., 2013). In a subsequent study, Dunn et al. (2016) compared magnetite in a number of CK and CV chondritesMeteorite class named after the Vigarano meteorite that fell in Italy in 1910. They have abundant large, well-defined rimless (?) chondrules of magnesium-rich olivine (~0.7 mm diameter; 40-65 vol. %), often surrounded by iron sulfide. They also contain 7-20 vol. % CAIs. The often dark-gray matrix is dominated by Fe-rich Click on Term to Read More, and presented geochemical, mineralogical, and petrographic evidence which is more consistent with separate CV and CK parent bodies; details of their study can also be found on the Dhofar 015 page. A study was undertaken by Bonal et al. (2004, 2006) to refine the subtypes of several CV3 chondrites. They utilized several methods to obtain their data, including Raman spectrometry of organicPertaining to C-containing compounds. Organic compounds can be formed by both biological and non-biological (abiotic) processes. Click on Term to Read More material, a petrologic study of Fe zoning in olivineGroup of silicate minerals, (Mg,Fe)2SiO4, with the compositional endpoints of forsterite (Mg2SiO4) and fayalite (Fe2SiO4). Olivine is commonly found in all chondrites within both the matrix and chondrules, achondrites including most primitive achondrites and some evolved achondrites, in pallasites as large yellow-green crystals (brown when terrestrialized), in the silicate portion Click on Term to Read More phenocrysts, presolar grain abundance, and a noble gasElement occurring in the right-most column of the periodic table; also called "inert" gases. In these gases, the outer electron shell is completely filled, making them very unreactive. Click on Term to Read More study. These methods are in contrast to that of TL sensitivity data of feldsparAn alumino-silicate mineral containing a solid solution of calcium, sodium and potassium. Over half the Earth’s crust is composed of feldspars and due to their abundance, feldspars are used in the classification of igneous rocks. A more complete explanation can be found on the feldspar group page. Click on Term to Read More which is typically used to determine subtypes of ordinary chondrites, and which was previously applied to the CV3 chondrites. They suggest that TL sensitivity data are not applicable to aqueously altered carbonaceous chondrites because of loss of feldspars through dissolution, leading to an underestimate of the petrologic subtypes. They have redefined the petrologic subtypes of the common CV3 members as follows:

These differences in petrologic subtype are explained by Greenwood et al. (2009) in their study of CV and CK chondriteClass of carbonaceous chondrite named for the Karoonda meteorite that fell in Australia in 1930. They are more oxidized than all other carbonaceous chondrites and genetically distinct from CV chondrites. CK chondrites appear dark-gray or black due to a high percentage of Cr-rich magnetite dispersed in a matrix of dark Click on Term to Read More relationships. They assert that there is a decoupling between the silicateThe most abundant group of minerals in Earth's crust, the structure of silicates are dominated by the silica tetrahedron, SiO44-, with metal ions occurring between tetrahedra). The mesodesmic bonds of the silicon tetrahedron allow extensive polymerization and silicates are classified according to the amount of linking that occurs between the and organic components with respect to measurements involving thermal metamorphism.

Diagram credit: M. M. M. Meier et al., Earth and Planetary Science Letters, vol. 490 (2018)
‘Cosmic history and a candidate parent asteroid for the quasicrystal-bearing meteorite Khatyrka’
(https://doi.org/10.1016/j.epsl.2018.03.025) On the other hand, the ~39 km diameter, C-type asteroid 495 Eulalia was found to have spectral characteristics very similar to Grosnaja, including a ‘featureless’ spectrum, a slight negative slope, and a virtually identical albedoRatio of the amount of light reflected by an object and the amount of incident light. Albedo is used as a measure of the reflectivity or intrinsic brightness of an object. A white, perfectly reflecting surface has an albedo of 1.0 while a black perfectly absorbing surface would have an Click on Term to Read More (Fieber-Beyer et al., 2008). Moreover, Eulalia is located at the 3:1 Kirkwood GapLack of asteroids in regions within the asteroid belt (between Mars and Jupiter) coinciding with orbital periods that are simple fractions of Jupiter’s own orbital period. The absence of asteroids in these gaps is due to resonance with Jupiter’s gravitational influence.         Click on Term to Read More (a mean motion resonance located at 2.487 AU) and is predicted to rapidly deliver almost half of its ejected material to Earth crossing orbits; the timing is consistent with the 1.7 m.y. CRE age of Grosnaja. The above specimen of Grosnaja is a 1.5 g partial slice cut from a 20.5 g specimen formerly in the Natural History Museum, Humboldt University, Berlin.