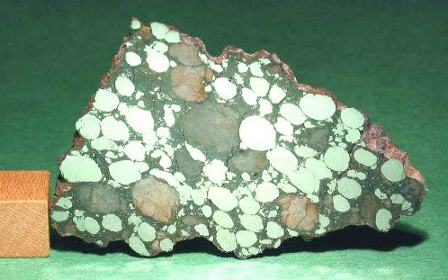 Fell April 3,1984
11° 29′ 30′ N., 11° 39′ 30′ E. At 6:30 in the evening, a bright fireballA fireball is another term for a very bright meteor, generally brighter than magnitude -4, which is about the same magnitude of the planet Venus as seen in the morning or evening sky. A bolide is a special type of fireball which explodes in a bright terminal flash at its end, often with visible fragmentation. Click on Term to Read More approaching from the west was seen and heard by local residents. The cone-shaped mass that landed in a corn field near the village of Bogga Dingare in Yobe, Nigeria, was estimated to have weighed ~100 kg, but most of the mass was broken up into small pieces and dispersed. Gujba is a primitive, polymict, chondritic brecciaWork in Progress ... A rock that is a mechanical mixture of different minerals and/or rock fragments (clasts). A breccia may also be distinguished by the origin of its clasts: (monomict breccia: monogenetic or monolithologic, and polymict breccia: polygenetic or polylithologic). The proportions of these fragments within the unbrecciated material Click on Term to Read More, the first fallMeteorite seen to fall. Such meteorites are usually collected soon after falling and are not affected by terrestrial weathering (Weathering = 0). Beginning in 2014 (date needs confirmation), the NomComm adopted the use of the terms "probable fall" and "confirmed fall" to provide better insight into the meteorite's history. If Click on Term to Read More of the bencubbinite group. It contains 0.4–8 mm-diameter, rounded, metallic globules (~41 vol%) and 0.8–15 mm-diameter silicateThe most abundant group of minerals in Earth's crust, the structure of silicates are dominated by the silica tetrahedron, SiO44-, with metal ions occurring between tetrahedra). The mesodesmic bonds of the silicon tetrahedron allow extensive polymerization and silicates are classified according to the amount of linking that occurs between the globules (~20 vol%), cemented together by a dark-colored, silicate-rich, impact-melt matrixFine grained primary and silicate-rich material in chondrites that surrounds chondrules, refractory inclusions (like CAIs), breccia clasts and other constituents. Click on Term to Read More composed of mm-sized fragments of both silicate and metalElement that readily forms cations and has metallic bonds; sometimes said to be similar to a cation in a cloud of electrons. The metals are one of the three groups of elements as distinguished by their ionization and bonding properties, along with the metalloids and nonmetals. A diagonal line drawn Click on Term to Read More globules (~39 vol%). 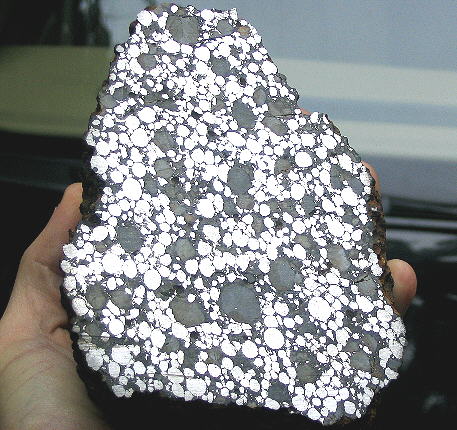