CH/CBb
(transitional between CH3 chondriteChondrites are the most common meteorites accounting for ~84% of falls. Chondrites are comprised mostly of Fe- and Mg-bearing silicate minerals (found in both chondrules and fine grained matrix), reduced Fe/Ni metal (found in various states like large blebs, small grains and/or even chondrule rims), and various refractory inclusions (such Click on Term to Read More and CBb bencubbinite) 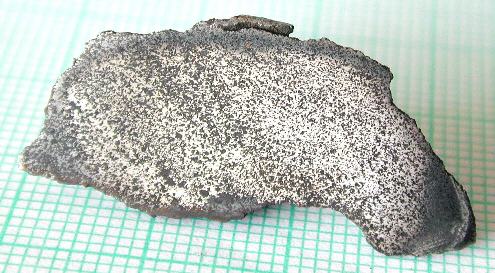 Found October 2003
53° 37′ N., 56° 20′ E. A single fusion-crusted meteoriteWork in progress. A solid natural object reaching a planet’s surface from interplanetary space. Solid portion of a meteoroid that survives its fall to Earth, or some other body. Meteorites are classified as stony meteorites, iron meteorites, and stony-iron meteorites. These groups are further divided according to their mineralogy and Click on Term to Read More weighing 16.7 kg was found in a field by a farmer while operating a tractor. The location of the findMeteorite not seen to fall, but recovered at some later date. For example, many finds from Antarctica fell 10,000 to 700,000 years ago. Click on Term to Read More was in the Ishimbai region of Bashkortostan, Russia, near the village of Isheyevo. In September of 2004, a sample was submitted for analysis to the Vernadsky Institute, Russian Academy of Sciences, Moscow (M. Ivanova), while additional analysis was conducted at Michigan State University (A. Ulianov). Although a classification of CBb was INITIALLY agreed upon and submitted to the Nomenclature Committee, Isheyevo exhibits mineralogical characteristics intermediate between CH and CBb chondritesChondrites are the most common meteorites accounting for ~84% of falls. Chondrites are comprised mostly of Fe- and Mg-bearing silicate minerals (found in both chondrules and fine grained matrix), reduced Fe/Ni metal (found in various states like large blebs, small grains and/or even chondrule rims), and various refractory inclusions (such Click on Term to Read More and a classification of CH/CBb is recommended.

Photos shown courtesy of Olga Dobrova—Rus Meteorites A unique group of 26Al-poor relict CAIs consisting of highly refractory spinel+grossite+hibonite has also been identified in Isheyevo. These are embedded in 26Al-poor, magnesian, porphyritic host chondrules within the metal-poor lithology (Krot et al., 2007). This was an early-formed population of CAIs that must have been extant in the chondrule-forming region prior to the formation of the host magnesian porphyritic chondrules—a region inferred to have been distant in time and/or proximity from that of all other chondrule-bearing chondrite groups. Since the O-isotopic values of the CAIs present in CB chondrites plot along the CCAM line instead of the CR trend line, they represent primordial 26Al-poor molecular cloudAn interstellar gas cloud that is dense enough to allow the formation of molecules and comprised of a cold dense complex mixture of interstellar gas and dust roughly 75% hydrogen and 21-24% helium. Clouds contain trace amounts of other molecules, of which well over 100 different types have now been Click on Term to Read More material rather than condensates from the impact vapor plume (Fedkin et al., 2015; Van Kooten et al., 2016). Schematic of the Evolution Scenario of the Early Solar SystemThe Sun and set of objects orbiting around it including planets and their moons and rings, asteroids, comets, and meteoroids.
A. Giant Molecular Cloud ⇒ B. Protostars ⇒ C. Proto-Sun and Protoplanetary DiskFlattened and rotating disk of dense gas and dust/solids orbiting a young star from which planets can eventually form.   Click on Term to Read More 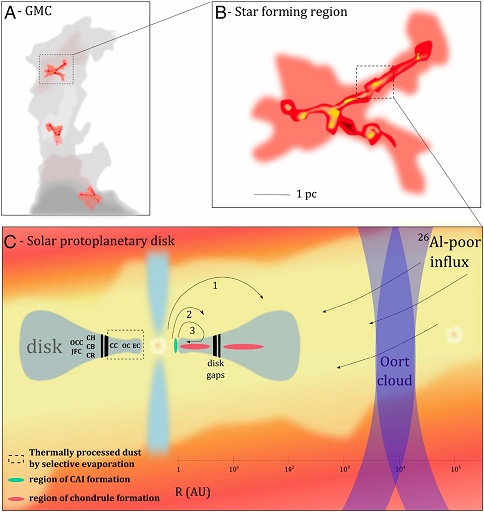 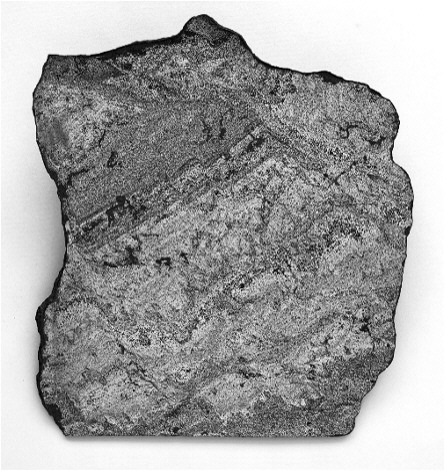 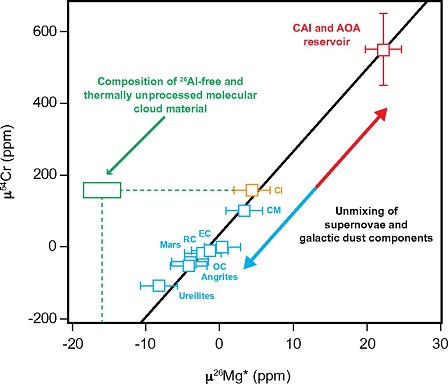 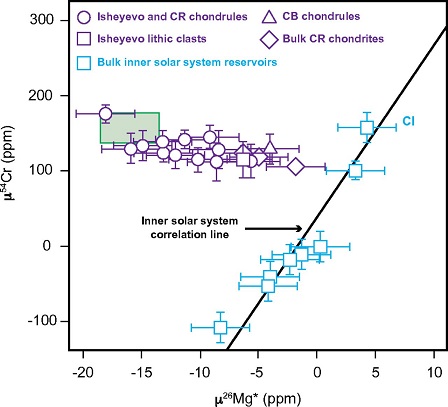 Diagrams credit: Van Kooten et al., PNAS, vol. 113, no. 8 (2016, open access link)
‘Isotopic evidence for primordial molecular cloud material in metal-rich carbonaceous chondrites’
(https://doi.org/10.1073/pnas.1518183113) Based on the K–Ar dating system, an age of ~4.3 b.y. was estimated for Isheyevo. Although this age typically represents the last degassing event, there is a strong likelihood that late thermal disturbances could have affected this chronometer. Van Kooten et al. (2016) employed 53Mn–53Cr chronometry to date the formation of secondary carbonateMineral or compound containing carbon and oxygen (i.e. calcium carbonate, CaCO3, calcite). Click on Term to Read More minerals in several hydrated lithic clasts, now constituents of the Isheyevo meteorite. This chronometer indicates that the source parent body of the hydrated lithic clasts had experienced aqueous activity 1.54 (+0.92, –1.11) m.y. later than it occurred on either the CI or CM chondrite parent bodies. This is consistent with a later accretion of the Isheyevo daughter body from an impact-generated vapor plume, while incorporating the exogenous hydrated lithic clasts. Ivanova et al. (2008) ascertained a CRE age of 34 m.y. for Isheyevo, which is in close accord with that determined for Bencubbin but significantly older than for most CH chondrites. Although the bulk meteorite is unshocked (S1), olivine grains in some chondrules exhibit features of moderate shock to stage S4 including mosaicism, planar fractures, and planar deformation features (PDFs). As with other bencubbinites and CH chondrites, Isheyevo contains an abundance of isotopically heavy N, and it contains the highest average matrix δ15N value of any meteorite—up to +1500‰ (the average composition of the solar nebula is δ15N ~ –300‰). In addition, hotspots have been identified in Isheyevo with values as high as δ15N +4000 (±1500)‰. The 15N-enrichment of the lithic clasts predates the clast accretion to the Isheyevo parent body. The main carrier phase(s) of 15N in the lithic clasts is not carbide or taeniteLess common than kamacite, both taenite and kamacite are Ni-Fe alloys found in iron meteorites. Taenite, γ-(Fe,Ni), has 27-65 wt% Ni, and forms small crystals that appear as highly reflecting thin ribbons on the etched surface of a meteorite; the name derives from the Greek word for "ribbon." Click on Term to Read More as was once thought, but instead the 15N may have been remobilized during a strong shock-melting event (Sugiura et al., 2000; Ivanova et al., 2007). In their in-depth study of Bencubbin, Perron et al. (2008) proposed that water and 15N-bearing organic compounds were degassed from the hydrated lithic clasts during the impact of a chondritic object(s). These hydrated lithic clasts later agglomerated onto the CB/CH/Isheyevo parent body during the initial accretionary stage. Conversely, in their scanning ionAtom with a net electrical charge because it has lost, or gained, one or more electrons relative to the number possessed by a neutral atom of the same element. A positively charged ion (cation) has fewer electrons than a neutral atom; a negatively charged ion (anion) has more. Click on Term to Read More study of Isheyevo lithic clasts, Bonal et al. (2008) have resolved the presence of isotopically anomalous organic compounds, suggesting that this may be the source of the abundant 15N. In a similar conclusion based on studies of a hydrated lithic clast, Leitner et al. (2010, 2011) identified a presolar silicate grain of a type associated with a core-collapse supernovaStellar explosion that expels much or all of the stellar material with great force, driving a blast wave into the surrounding space, and leaving a supernova remnant. Supernovae are classified based on the presence or absence of features in their optical spectra taken near maximum light. They were first categorized Click on Term to Read More which was found to contain 15N-rich material (δ15N = 1400‰ and higher). The presolar grainsMineral grains that formed before our solar system. These tiny crystalline grains are typically found in the fine-grained matrix of chondritic (primitive) meteorites. Most grains probably formed in supernovae or the stellar outflows of red giant (AGB) stars before being incorporated in the molecular cloud from which the solar system Click on Term to Read More were injected ~100 AUThe astronomical unit for length is described as the "mean" distance (average of aphelion and perihelion distances) between the Earth and the Sun. Though most references state the value for 1 AU to be approximately 150 million kilometers, the currently accepted precise value for the AU is 149,597,870.66 km. The Click on Term to Read More from the solar nebula (Sugiura and Fujiya, 2011), at an abundance determined to be ~10 ppmParts per million (106). Click on Term to Read More. These findings support the theory of surviving protosolar cloud material as the source of the 15N-anomaly. Other studies attribute the source of the heavy N to N2 self-shielding or low-temperature ion-molecule reactions in the protosolar molecular cloud or the protoplanetary disk. The heavy N may have been carried in a phyllosilicate layer or in amorphousMaterial without the regular, ordered structure of crystalline solids. Amorphous substances, like glass, lack a definite repeating pattern in their atomic structures (crystallinity). There may be small regions of order, but, overall there is disorder.   Click on Term to Read More ferrihydrite and redistributed/diluted by aqueous alteration processes to produce Group I clasts (Bonal et al. (2010). Isheyevo has undergone only minor terrestrial weathering (W1). This meteorite demonstrates characteristics of a transitional member of the CR clan, which allows mineral and chemical comparisons to be made between all of the members. The specimen of Isheyevo shown above is a 2.1 g slice (photography courtesy of Sergey Vasiliev). The photo below shows the detailed cut face of a 253 g slice, courtesy of the J. Piatek Collection. 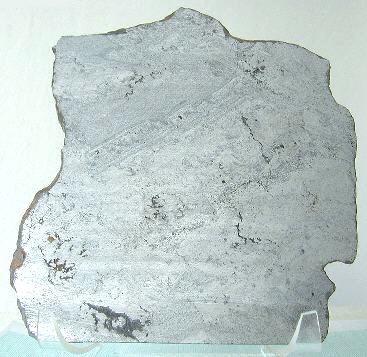