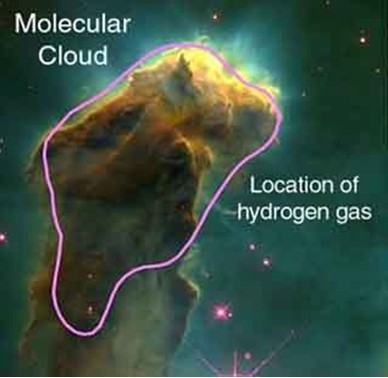 An interstellar gas cloud that is dense enough to allow the formation of molecules and comprised of a cold dense complex mixture of interstellar gas and dust roughly 75% hydrogenLightest and most common element in the universe (~92% by atoms; ~75% by mass). Hydrogen's isotopes are: • 1H (99.9885 %)
• 2H (0.0115 %), also called deuterium.
• 3H, also called Tritium, is a radioactive (t½ = 12.32 y) by-product of atmospheric thermonuclear tests in Earth's hydrosphere and atmosphere.
and 21-24% heliumHelium (He) Second lightest and second most abundant element (after Hydrogen) in the universe. The most abundant isotope is 4He (99.9998%), 3He is very rare. Helium comprises ~8% of the atoms (25% of the mass) of all directly observed matter in the universe. Helium is produced by hydrogen burning inside. Clouds contain trace amounts of other molecules, of which well over 100 different types have now been discovered in space. Dust grains make up ~1 % of the mass of a cloud. The relatively high densityMass of an object divided by its volume. Density is a characteristic property of a substance (rock vs. ice, e.g.). Some substances (like gases) are easily compressible and have different densities depending on how much pressure is exerted upon them. The Sun is composed of compressible gases and is much of dust particles plays an important role in the formation and protection of the complex molecules. The emission of molecular lines often shows several distinct intensity peaks, each representing individual clumps or clouds of gas and dust in a region that characteristically extends for 50 light-years. Two distinct types of molecular cloud are known, both associated with starSelf-luminous object held together by its own self-gravity. Often refers to those objects which generate energy from nuclear reactions occurring at their cores, but may also be applied to stellar remnants such as neutron stars. formation: giant molecular clouds (GMCs) and dwarf molecular clouds. GMCs are the coolest (10 to 20 K) and densest (106 to 1010 particles/cm3) portions of the interstellar mediumMaterial between the stars, consisting of gas, dust and cosmic rays (high energy charged particles moving at nearly the speed of light). It comprises ~10% of visible matter in the disk of our Galaxy (Milky Way). Until recently it was generally assumed that silicates in the ISM were amorphous, but. They typically stretch over 150 light-years and contain several 100,000s of MsunOur parent star. The structure of Sun's interior is the result of the hydrostatic equilibrium between gravity and the pressure of the gas. The interior consists of three shells: the core, radiative region, and convective region. Image source: http://eclipse99.nasa.gov/pages/SunActiv.html. The core is the hot, dense central region in which the of material, making them are the largest gravitationally bound objects in the GalaxyConcentration of 106 to 1012 stars, dust and gas, that are gravitationally bound. Our galaxy contains ~2 × 1011 stars. There are four main types of galaxies: • Elliptical
• Lenticular
• Spiral
• Irregular
.

Molecular clouds are the only places where star formation is known to occur. Star formation occurs when deeply embedded clumps of interstellar gas and dust collapse under self-gravitation or due to impinging shock waves. Young stellar objects (YSOs) – newborn stars or stars in the process of forming – are obscured from direct optical view, and the only source of information from inside these clumps is provided by radio and infrared waves emitted by molecules and dust.