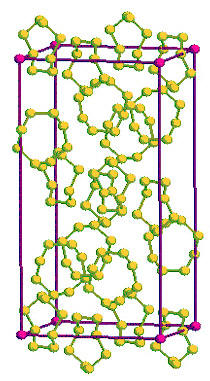 Crystalline solids composed of individual molecules packed together in a regular repeating fashion. There are no bonds between the molecules, instead they are held to each other by weaker intermolecular forces. An example is the native elementSubstance composed of atoms, each of which has the same atomic number (Z) and chemical properties. The chemical properties of an element are determined by the arrangement of the electrons in the various shells (specified by their quantum number) that surround the nucleus. In a neutral atom, the number of sulfur, where S is arranged in puckered rings forming tightly bound S8 units bonded together by van der Waals forces (below).