Our parent starSelf-luminous object held together by its own self-gravity. Often refers to those objects which generate energy from nuclear reactions occurring at their cores, but may also be applied to stellar remnants such as neutron stars.. The structure of Sun’s interior is the result of the hydrostatic equilibriumBalance between gravity and gas pressure. In the case of a star, gravity originates in mutual gravitational attraction of the entire mass of the star. Gas pressure is produced by nuclear reactions that heat the star's gas. Any change in the internal temperature of a star results in a change between gravityAttractive force between all matter - one of the four fundamental forces. and the pressure of the gas. The interior consists of three shells: the coreIn the context of planetary formation, the core is the central region of a large differentiated asteroid, planet or moon and made up of denser materials than the surrounding mantle and crust. For example, the cores of the Earth, the terrestrial planets and differentiated asteroids are rich in metallic iron-nickel., radiative region, and convective region. 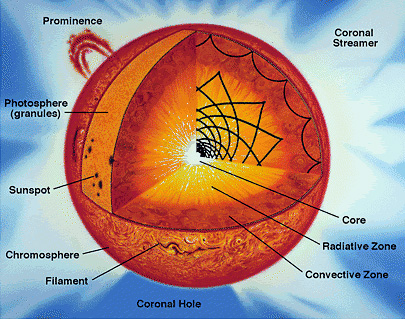 The radiative zonePortion of a star where the primary transport of energy is by photons (electromagnetic radiation). extends from ~25% to 85% of the solar radius. Here, and in the core, the primary transport of energy is by the movement of photons; temperatures range from 0.5-8 x 106 K with densities from 0.01-10 g/cm3. The radiative zone is not transparent. On average, photons only ~2 cm before being scattered in a random direction by an encounter with an electron. The resulting "drunkard’s walk" is very inefficient and it typically takes ~170,000 years for energy generated in the core to escape to the surface.