Regions on the Sun’s surface that appear dark because they are cooler than the surrounding photospherePoint where a star's atmosphere appears to become completely opaque. Thus, the photosphere may be thought of as the imaginary surface from which the starlight that we see appears to be emitted. The photosphere is not a thin surface; the Sun's photosphere has a thickness of ~100 km. (Within that, typically by ~1500-1800 K. Sunspots develop and persist for periods ranging from hours to months, and are carried around the surface of the SunOur parent star. The structure of Sun's interior is the result of the hydrostatic equilibrium between gravity and the pressure of the gas. The interior consists of three shells: the core, radiative region, and convective region. Image source: http://eclipse99.nasa.gov/pages/SunActiv.html. The core is the hot, dense central region in which the by its rotation.
Sunspots travel in pairs (north and south magnetic poles). The pairs are due to magnetic flux tubes on the surface of the Sun that carry energy away causing the surface to be cooler than the surrounding material. 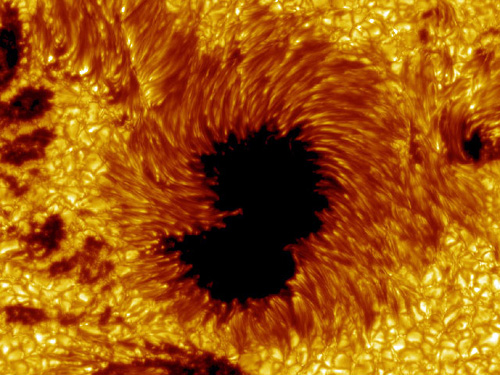