Terrestrial brecciaWork in Progress ... A rock that is a mechanical mixture of different minerals and/or rock fragments (clasts). A breccia may also be distinguished by the origin of its clasts: (monomict breccia: monogenetic or monolithologic, and polymict breccia: polygenetic or polylithologic). The proportions of these fragments within the unbrecciated material composed of angular fragments of different rock types and glass inclusions. Glass can make up more than half of the volume of suevite. MineralInorganic substance that is (1) naturally occurring (but does not have a biologic or man-made origin) and formed by physical (not biological) forces with a (2) defined chemical composition of limited variation, has a (3) distinctive set of of physical properties including being a solid, and has a (4) homogeneous grains in the rock fragments commonly display shock-metamorphic effects. Suevite was named after a rock found at the Ries CraterBowl-like depression ("crater" means "cup" in Latin) on the surface of a planet, moon, or asteroid. Craters range in size from a few centimeters to over 1,000 km across, and are mostly caused by impact or by volcanic activity, though some are due to cryovolcanism. in southern Germany (photograph). 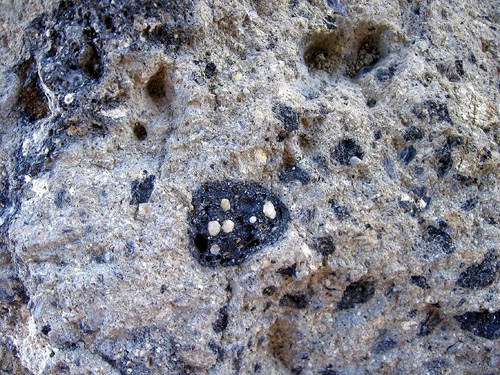