Material between the stars, consisting of gas, dust and cosmic raysHigh-energy subatomic particles mainly originating outside the Solar System that continuously bombard the Earth from all directions. They represent one of the few direct samples of matter from outside our solar system and travel through space at nearly the speed of light. These charged particles – positively charged protons or (high energy charged particles moving at nearly the speed of lightSpeed at which electromagnetic radiation propagates in a vacuum. Although referred to as the speed of light, this should be more properly called the 'speed of a massless particle’ as it is the speed at which all particles of zero mass (not only photons, but gravitons and massless neutrinos if). It comprises ~10% of visible matter in the disk of our GalaxyConcentration of 106 to 1012 stars, dust and gas, that are gravitationally bound. Our galaxy contains ~2 × 1011 stars. There are four main types of galaxies: • Elliptical
• Lenticular
• Spiral
• Irregular
(Milky Way). Until recently it was generally assumed that silicates in the ISM were amorphousMaterial without the regular, ordered structure of crystalline solids. Amorphous substances, like glass, lack a definite repeating pattern in their atomic structures (crystallinity). There may be small regions of order, but, overall there is disorder.  , but the Infrared Space Observatory (ISO) has discovered crystalline silicates. Crystalline silicates appear to be ubiquitous (except for the diffuse ISM) and sometimes even in very large quantities (>50 % of the small dust particles). 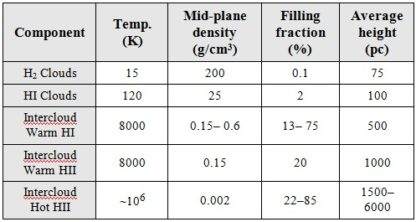