Winonaitea partially differentiated asteroid that was disrupted just as it began to form an Fe core and a silicate-rich crust. This disrupting impact mixed silicates into molten Ni-Fe metal forming the silicated IAB irons, and mixed olivine-rich residues of partial melts into unmelted silicates, forming the winonaites. A few winonaites (typical)* 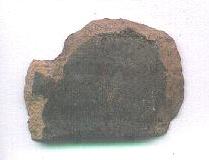 Found October 1996
28° 39.28′ N., 13° 27.52′ E. A single stone weighing 259 g was found in the Libyan Sahara. Hammadah al Hamra 193 has a weathering grade of W3 and a shock stageA petrographic assessment, using features observed in minerals grains, of the degree to which a meteorite has undergone shock metamorphism. The highest stage observed in 25% of the indicator grains is used to determine the stage. Also called "shock level".               of S1. Unlike most other winonaites having recrystallized equigranular textures, HaH 193 contains large poikilitic orthopyroxeneOrthorhombic, low-Ca pyroxene common in chondrites. Its compositional range runs from all Mg-rich enstatite, MgSiO3 to Fe-rich ferrosilite, FeSiO3. These end-members form an almost complete solid solution where Mg2+ substitutes for Fe2+ up to about 90 mol. % and Ca substitutes no more than ~5 mol. % (higher Ca2+ contents occur grains up to 5 mm in size which enclose smaller grains of olivineGroup of silicate minerals, (Mg,Fe)2SiO4, with the compositional endpoints of forsterite (Mg2SiO4) and fayalite (Fe2SiO4). Olivine is commonly found in all chondrites within both the matrix and chondrules, achondrites including most primitive achondrites and some evolved achondrites, in pallasites as large yellow-green crystals (brown when terrestrialized), in the silicate portion, plagioclaseAlso referred to as the plagioclase feldspar series. Plagioclase is a common rock-forming series of feldspar minerals containing a continuous solid solution of calcium and sodium: (Na1-x,Cax)(Alx+1,Si1-x)Si2O8 where x = 0 to 1. The Ca-rich end-member is called anorthite (pure anorthite has formula: CaAl2Si2O8) and the Na-rich end-member is albite, and clinopyroxene (Floss et al., 2003, 2007). These large poikilitic orthopyroxene grains have been attributed to an extended period of thermal metamorphism and slow cooling at depth. InterstitialTerm applied to ions or atoms occupying sites between lattice points. regions contain clumps of coarse-grained (200–300 µm), equigranular olivine grains possibly representing partial melt residues, as well as amphibole (fluoro-edenite) grains up to 2 mm in size. The fluoro-edenite, which poikilitically encloses a variety of other mineralInorganic substance that is (1) naturally occurring (but does not have a biologic or man-made origin) and formed by physical (not biological) forces with a (2) defined chemical composition of limited variation, has a (3) distinctive set of of physical properties including being a solid, and has a (4) homogeneous grains, has not been identified previously in any other meteoriteWork in progress. A solid natural object reaching a planet’s surface from interplanetary space. Solid portion of a meteoroid that survives its fall to Earth, or some other body. Meteorites are classified as stony meteorites, iron meteorites, and stony-iron meteorites. These groups are further divided according to their mineralogy and. Based on trace elementSubstance composed of atoms, each of which has the same atomic number (Z) and chemical properties. The chemical properties of an element are determined by the arrangement of the electrons in the various shells (specified by their quantum number) that surround the nucleus. In a neutral atom, the number of evidence, it is argued that this fluoro-edenite is the product of a chemical reaction between clinopyroxene and plagioclase with the addition of F, the latter possibly being derived from a F-bearing metasomatic fluid; the fluor-apatite present in this meteorite might also be a product of this fluid. Veins of FeNi-metal and troiliteBrass colored non-magnetic mineral of iron sulfide, FeS, found in a variety of meteorites. and associated schreibersiteNi-Fe phosphide mineral, (Fe,Ni)3P, yellowish in color and predominantly found in iron and stony-iron meteorites. Schreibersite can also be found in a variety of other meteorites including some acapulcoites, aubrites, enstatite chondrites and achondrites, lunars, ureilites, winonaites and a smattering of other meteorite types like CM, CO and CB. Schreibersite occur throughout the meteorite.

A similar distinction could be made among the winonaites in our collections, although there is not yet an analog of the IAB complex irons for the acapulcoite/lodranite PB. Northwest Africa 1463 (and pairing group) ranks as the most primitive member of the winonaites, containing intact chondrulesRoughly spherical aggregate of coarse crystals formed from the rapid cooling and solidification of a melt at  ~1400 ° C. Large numbers of chondrules are found in all chondrites except for the CI group of carbonaceous chondrites. Chondrules are typically 0.5-2 mm in diameter and are usually composed of olivine comparable to a petrologic typeMeasure of the degree of aqueous alteration (Types 1 and 2) and thermal metamorphism (Types 3-6) experienced by a chondritic meteorite. Type 3 chondrites are further subdivided into 3.0 through 3.9 subtypes. 5 chondriteChondrites are the most common meteorites accounting for ~84% of falls. Chondrites are comprised mostly of Fe- and Mg-bearing silicate minerals (found in both chondrules and fine grained matrix), reduced Fe/Ni metal (found in various states like large blebs, small grains and/or even chondrule rims), and various refractory inclusions (such (Benedix et al., 2003). However, most winonaites experienced extensive thermal metamorphism involving incipient sulfide melting and exhibit highly recrystallized textures, characteristics analogous to the ‘typical’ acapulcoites. Metamorphic progression in other winonaites led to partial loss of the low-melting phases FeS and plagioclase, and these are designated as a ‘transitional’ stage in the acapulcoite/lodranite metamorphic continuum. Those winonaites which experienced the highest temperatures ultimately crystallized from residual melt material, and they exhibit significant depletions in FeS, FeNi-metal, and plagioclase (including plagiophile trace elements). Samples representing this advanced metamorphic stage are known as lodranites in the acapulcoite/lodranite metamorphic sequence, while the term ‘evolved’ could be used to represent a similar metamorphic stage in the winonaite group (e.g., Tierra Blanca; Hunt et al., 2017). Although winonaites exhibit significant mineralogical and trace element heterogeneity on a large scale, they likely originated on a common parent bodyThe body from which a meteorite or meteoroid was derived prior to its ejection. Some parent bodies were destroyed early in the formation of our Solar System, while others like the asteroid 4-Vesta and Mars are still observable today. generally considered to be the same as that of IAB complex irons. Evidence for this includes nearly identical O-isotopic compositions and silicateThe most abundant group of minerals in Earth's crust, the structure of silicates are dominated by the silica tetrahedron, SiO44-, with metal ions occurring between tetrahedra). The mesodesmic bonds of the silicon tetrahedron allow extensive polymerization and silicates are classified according to the amount of linking that occurs between the textures in certain inclusions, and a similar compositional range in silicate mineralogies. The heterogeneous nature of winonaites is thought to be the result of incomplete differentiationA process by which a generally homogeneous chondritic body containing mostly metal, silicates and sulfides will melt and form distinct (differentiated) layers of different densities.   When the melting process continues for a long enough period of time, the once chondritic body will re-partition into layers of different composition including followed by the catastrophic impact disruption and reassembly of the parent body (Benedix et al., 2000). This event was followed by a sustained period of impact brecciationThe formation of a breccia through a process by which rock fragments of of various types are recemented or fused together..

Textural comparison of four winonaites, L to R: NWA 1463 (with relict chondruleRoughly spherical aggregate of coarse crystals formed from the rapid cooling and solidification of a melt at  ~1400 ° C. Large numbers of chondrules are found in all chondrites except for the CI group of carbonaceous chondrites. Chondrules are typically 0.5-2 mm in diameter and are usually composed of olivine), Winona, Tierra Blanca, HaH 193
Image credit: Floss et al., MAPS, vol. 43, #4, p. 660 (2008)
‘Evolution of the winonaite parent body: Clues from silicate mineral trace element distributions’
(http://dx.doi.org/10.1111/j.1945-5100.2008.tb00676.x) Based on the oxygenElement that makes up 20.95 vol. % of the Earth's atmosphere at ground level, 89 wt. % of seawater and 46.6 wt. % (94 vol. %) of Earth's crust. It appears to be the third most abundant element in the universe (after H and He), but has an abundance only isotopeOne of two or more atoms with the same atomic number (Z), but different mass (A). For example, hydrogen has three isotopes: 1H, 2H (deuterium), and 3H (tritium). Different isotopes of a given element have different numbers of neutrons in the nucleus. data obtained by Hunt et al. (2012) for silicate inclusions in IAB irons, along with the observed volatileSubstances which have a tendency to enter the gas phase relatively easily (by evaporation, addition of heat, etc.). element depletions, it can be inferred that the winonaite precursor likely had a volatile-depleted carbonaceous chondrite-like composition. From results of their trace element analyses of a broad sampling of winonaites, Hunt et al. (2017) recognized that CM chondritesChondrites are the most common meteorites accounting for ~84% of falls. Chondrites are comprised mostly of Fe- and Mg-bearing silicate minerals (found in both chondrules and fine grained matrix), reduced Fe/Ni metal (found in various states like large blebs, small grains and/or even chondrule rims), and various refractory inclusions (such represent the closest match; however, the important differences that exist indicate that the precursor to winonaites is unlike any meteorite class currently known. Further details about the petrogenetic history of the winonaites can be found on the Tierra Blanca page. The specimen of HaH 193 shown above is a 2.2 g partial slice.