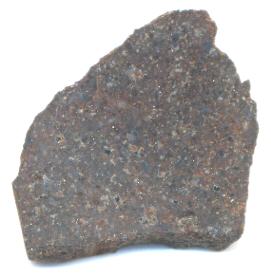 Purchased March 2004
no coordinates recorded Several stones weighing together ~4.2 kg were found in the Sahara Desert and later sold to a collector in Zagora, Morocco in March 2004. This meteoriteWork in progress. A solid natural object reaching a planet’s surface from interplanetary space. Solid portion of a meteoroid that survives its fall to Earth, or some other body. Meteorites are classified as stony meteorites, iron meteorites, and stony-iron meteorites. These groups are further divided according to their mineralogy and was analyzed at Northern Arizona University (T. Bunch and J. Wittke) and the University of Washington in Seattle (A. Irving and S. Kuehner), and it was initially determined to be a highly recrystallized (~120° triple junctions), highly equilibrated (W sequestration into metalElement that readily forms cations and has metallic bonds; sometimes said to be similar to a cation in a cloud of electrons. The metals are one of the three groups of elements as distinguished by their ionization and bonding properties, along with the metalloids and nonmetals. A diagonal line drawn) L7 chondriteChondrites are the most common meteorites accounting for ~84% of falls. Chondrites are comprised mostly of Fe- and Mg-bearing silicate minerals (found in both chondrules and fine grained matrix), reduced Fe/Ni metal (found in various states like large blebs, small grains and/or even chondrule rims), and various refractory inclusions (such with no relict chondrulesRoughly spherical aggregate of coarse crystals formed from the rapid cooling and solidification of a melt at  ~1400 ° C. Large numbers of chondrules are found in all chondrites except for the CI group of carbonaceous chondrites. Chondrules are typically 0.5-2 mm in diameter and are usually composed of olivine apparent. Notwithstanding this L7 classification, a subsequent oxygenElement that makes up 20.95 vol. % of the Earth's atmosphere at ground level, 89 wt. % of seawater and 46.6 wt. % (94 vol. %) of Earth's crust. It appears to be the third most abundant element in the universe (after H and He), but has an abundance only isotopeOne of two or more atoms with the same atomic number (Z), but different mass (A). For example, hydrogen has three isotopes: 1H, 2H (deuterium), and 3H (tritium). Different isotopes of a given element have different numbers of neutrons in the nucleus. study was conducted at the University of Western Ontario (T. Larson) which showed that NWA 3133 plots on the Carbonaceous ChondriteCarbonaceous chondrites represent the most primitive rock samples of our solar system. This rare (less than 5% of all meteorite falls) class of meteorites are a time capsule from the earliest days in the formation of our solar system. They are divided into the following compositional groups that, other than Anhydrous MineralInorganic substance that is (1) naturally occurring (but does not have a biologic or man-made origin) and formed by physical (not biological) forces with a (2) defined chemical composition of limited variation, has a (3) distinctive set of of physical properties including being a solid, and has a (4) homogeneous (CCAM) line clearly within the field of CV chondritesMeteorite class named after the Vigarano meteorite that fell in Italy in 1910. They have abundant large, well-defined rimless (?) chondrules of magnesium-rich olivine (~0.7 mm diameter; 40-65 vol. %), often surrounded by iron sulfide. They also contain 7-20 vol. % CAIs. The often dark-gray matrix is dominated by Fe-rich (see the O-isotope plot and diagram below).