CR6
(Primitive achondriteAchondrite with an almost chondritic composition with age similar to the primordial chondrites. These should be better classified as "metachondrites". in MetBull 89) 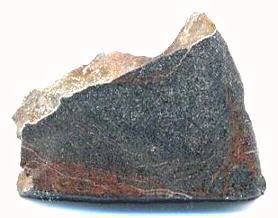 click on image for a magnified view Diagram credit: Bunch et al., 36th LPSC, #2308 (2005) Northwest Africa 3100 is a recrystallized, texturally evolved chondrite with an elevated Fe/Mn ratio and Ca-rich plagioclaseAlso referred to as the plagioclase feldspar series. Plagioclase is a common rock-forming series of feldspar minerals containing a continuous solid solution of calcium and sodium: (Na1-x,Cax)(Alx+1,Si1-x)Si2O8 where x = 0 to 1. The Ca-rich end-member is called anorthite (pure anorthite has formula: CaAl2Si2O8) and the Na-rich end-member is albite (features possibly reflecting metasomatism), and an O-isotopic composition that plots within the CR chondriteClass named for the Renazzo meteorite that fell in Italy in 1824, are similar to CMs in that they contain hydrous silicates, traces of water, and magnetite. The main difference is that CRs contain Ni-Fe metal and Fe sulfide that occurs in the black matrix and in the large chondrules field. These features may be most appropriately associated with the newly proposed group of carbonaceous metachondrites (Irving et al., 2005). The more highly fractionated, CR-related chondrite NWA 2994 and the equilibrated CR-an (or CR7) Tafassasset, both meteorites with O-isotopic ratios that plot with the CR chondrite group, may each represent lithologies on the CR parent body that experienced a higher degree and/or a longer duration of thermal metamorphism (Bunch et al., 2008) as well as metasomatism. Continued research on this topic has been ongoing (e.g., Bunch et al., 2005; Floss et al., 2005, [MAPS vol. 40, #3]; Irving et al., 2014 [#2465]; Sanborn et al., 2014 [#2032]). As provided in the Sanborn et al. (2014) abstract, a Δ17O vs. ε54Cr diagram is one of the best diagnostic tools for determining genetic relationships among meteorites (see diagrams below). Moreover, Sanborn et al. (2015) demonstrated that ε54Cr values are not affected by aqueous alteration. The specimen of NWA 3100 shown above is a 3.1 g partial slice.