R3.5–6, rumurutiiteMember of a rare group of chondrites, formerly named the Carlisle Lakes group, after a meteorite found in Australia in 1977. It is now named for the type specimen Rumuruti that fell in Kenya, Africa, in 1934. Rumuruti is the only witnessed fall of this group and only one small 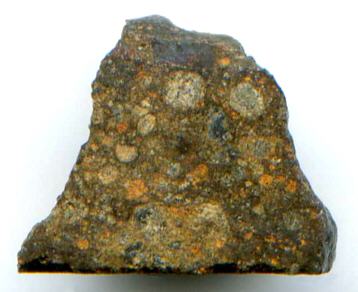 Found 1994-1995
27° 07.77′ N., 16° 20.61′ E. A single fragment weighing 205 g was found in the Libyan Sahara Desert. As with most other R chondritesChondrites are the most common meteorites accounting for ~84% of falls. Chondrites are comprised mostly of Fe- and Mg-bearing silicate minerals (found in both chondrules and fine grained matrix), reduced Fe/Ni metal (found in various states like large blebs, small grains and/or even chondrule rims), and various refractory inclusions (such Click on Term to Read More, Dar al Gani 013 is a chondritic genomict brecciaWork in Progress ... A rock that is a mechanical mixture of different minerals and/or rock fragments (clasts). A breccia may also be distinguished by the origin of its clasts: (monomict breccia: monogenetic or monolithologic, and polymict breccia: polygenetic or polylithologic). The proportions of these fragments within the unbrecciated material Click on Term to Read More enriched in solar-wind-implanted rare gases. This meteoriteWork in progress. A solid natural object reaching a planet’s surface from interplanetary space. Solid portion of a meteoroid that survives its fall to Earth, or some other body. Meteorites are classified as stony meteorites, iron meteorites, and stony-iron meteorites. These groups are further divided according to their mineralogy and Click on Term to Read More contains both equilibrated and highly unequilibrated lithic and mineralInorganic substance that is (1) naturally occurring (but does not have a biologic or man-made origin) and formed by physical (not biological) forces with a (2) defined chemical composition of limited variation, has a (3) distinctive set of of physical properties including being a solid, and has a (4) homogeneous Click on Term to Read More clasts together with impact-melt fragments, all incorporated within a fine-grained, olivine-rich, recrystallized matrixFine grained primary and silicate-rich material in chondrites that surrounds chondrules, refractory inclusions (like CAIs), breccia clasts and other constituents. Click on Term to Read More. Dispersed sulfide grains in the matrix are responsible for the darkening typically observed in R chondrites (Kallemeyn et al., 1996). The high noble metalElement that readily forms cations and has metallic bonds; sometimes said to be similar to a cation in a cloud of electrons. The metals are one of the three groups of elements as distinguished by their ionization and bonding properties, along with the metalloids and nonmetals. A diagonal line drawn Click on Term to Read More abundance (Pt, Os, Ir, AuThe astronomical unit for length is described as the "mean" distance (average of aphelion and perihelion distances) between the Earth and the Sun. Though most references state the value for 1 AU to be approximately 150 million kilometers, the currently accepted precise value for the AU is 149,597,870.66 km. The Click on Term to Read More, Ru) present in the pre-oxidized FeNi-metal component of the R chondrites was exsolved during the oxidationOxidation and reduction together are called redox (reduction and oxidation) and generally characterized by the transfer of electrons between chemical species, like molecules, atoms or ions, where one species undergoes oxidation, a loss of electrons,  while another species undergoes reduction, a gain of electrons. This transfer of electrons between reactants Click on Term to Read More phase, and was subsequently combined with sulfides, with the Pt residing in the unequilibrated phase, tetraferroplatinum, in some members.

Measurements of the coarser-grained feldspars present in higher petrologic types provide the most accurate ages; an Ar–Ar age of 4.53 (±0.01) b.y. has been determined for an equilibrated lithology of Rumuruti, which was age corrected for K decay bias to give an age of 4.56 b.y. (Trieloff et al., 2007; Buikin et al., 2006). A minimum range of ~170 m.y. in 39Ar–40Ar ages has been determined for various R chondrites (Dixon et al., 2003). They propose that the younger ages of some clasts could be the result of an early impact and subsequent deep burial with slow cooling in a thick regolithMixture of unconsolidated rocky fragments, soil, dust and other fine granular particles blanketing the surface of a body lacking an atmosphere. Regolith is the product of "gardening" by repeated meteorite impacts, and thermal processes (such as repeated heating and cooling cycles).   Click on Term to Read More or rubble-pile. Alternatively, a late impact could have reset the 39Ar–40Ar chronometer of those lithologies exhibiting younger ages, with shallow burial and rapid cooling occurring afterwards. This latter scenario is consistent with the very early age of breccia formation, the measured CRE ages, and the abundant solar rare gases characteristic of this group. It is equally plausible that the extremely brief metamorphic history (crystallizationPhysical or chemical process or action that results in the formation of regularly-shaped, -sized, and -patterned solid forms known as crystals. Click on Term to Read More 4.56 b.y. ago), the pervasive brecciationThe formation of a breccia through a process by which rock fragments of of various types are recemented or fused together. Click on Term to Read More, and the high abundance of solar-wind-implanted rare gases could reflect the collisional disruption and gravitational reassembly of the Rumuruti parent bodyThe body from which a meteorite or meteoroid was derived prior to its ejection. Some parent bodies were destroyed early in the formation of our Solar System, while others like the asteroid 4-Vesta and Mars are still observable today. Click on Term to Read More soon after its formation (Buikin et al., 2007). 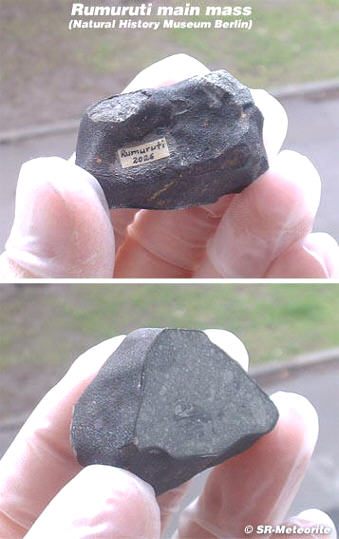