ChondriteChondrites are the most common meteorites accounting for ~84% of falls. Chondrites are comprised mostly of Fe- and Mg-bearing silicate minerals (found in both chondrules and fine grained matrix), reduced Fe/Ni metal (found in various states like large blebs, small grains and/or even chondrule rims), and various refractory inclusions (such, ungroupedModifying term used to describe meteorites that are mineralogically and/or chemically unique and defy classification into the group or sub-group they most closely resemble. Some examples include Ungrouped Achondrite (achondrite-ung), Ungrouped Chondrite (chondrite-ung), Ungrouped Iron (iron-ung), and Ungrouped Carbonaceous (C-ung).
(type 3, highly-reduced, metal-rich brecciaWork in Progress ... A rock that is a mechanical mixture of different minerals and/or rock fragments (clasts). A breccia may also be distinguished by the origin of its clasts: (monomict breccia: monogenetic or monolithologic, and polymict breccia: polygenetic or polylithologic). The proportions of these fragments within the unbrecciated material)
‘G chondrite’

click on the image for a magnified view Found 2008
no coordinates reported A single moderately weathered stone weighing 587 g was found in Algeria and sold in Tucson in January 2009 to M. Farmer and J. Strope. After the stone was cut into thin slices on a wire-saw (A. Karl), leaving ~450 g after accounting for the cutting loss, samples were sent to several investigators (T. Bunch and J. Wittke, NAU; M. Weisberg, KCCU) for study and classification. A preliminary classification was given for NWA 5492 as an anomalous member of the CB chondriteClass also known as bencubbinites, are named after the Bencubbin meteorite found in 1930 in Australia. Only a handful of these strange meteorites are known, all composed of >50 vol. % Ni-Fe metal, together with highly reduced silicates, and chondrules similar to those found in the CR group. group. 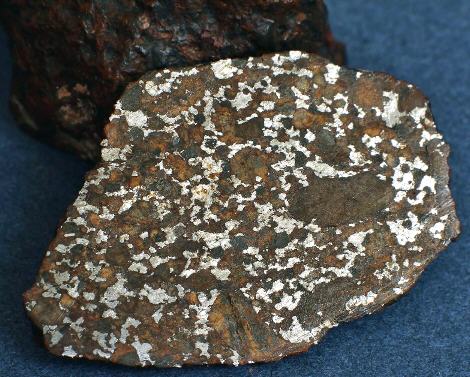 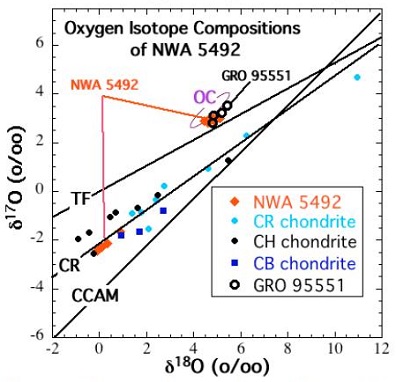 Diagram credit: Weisberg et al., 42nd LPSC, #1198 (2011) In their study of the fossil meteoriteThe textural, mineralogical or compositional remnant within a sedimentary rock of a meteorite that fell millions of years ago and found in Ordovician limestone from Sweden. Read Tiny Traces of a Big Asteroid Breakup for a complete writeup on this subject. In picture to the left a nautiloid shell is Österplana 065, Schmitz et al. (2016) included oxygen and chromium isotopic data obtained by Sanborn et al. (2015, abstract) for NWA 5492 and its likely genetic relative GRO 95551 in a coupled Δ17O vs. ε54Cr diagram (shown below). It shows that these two metal-rich meteorites plot in a distinct location in isotopeOne of two or more atoms with the same atomic number (Z), but different mass (A). For example, hydrogen has three isotopes: 1H, 2H (deuterium), and 3H (tritium). Different isotopes of a given element have different numbers of neutrons in the nucleus. space, indicating that they derive from a unique parent body. Chromium vs. Oxygen Isotope Plot

click on image for a magnified view Diagram credit: Schmitz, B. et al., Nature Communications, vol. 7, p. 4 (2016, open access link)
‘A new type of solar-system material recovered from Ordovician marine limestoneA common form of calcium carbonate (CaCO3). Other common forms of CaCO3 include chalk and marble. ‘
(https://doi.org/10.1038/ncomms11851)’ Weisberg et al. (2015) demonstrated that an overlap exists in O-isotope values between chondrules from NWA 5492 and GRO 95551 and those from O, E, and R chondrites, which is indicative of a close relationship among them. They suggest that the chondrules (or their precursor material) which constitute these disparate meteorites likely formed in a similar nebulaAn immense interstellar, diffuse cloud of gas and dust from which a central star and surrounding planets and planetesimals condense and accrete. The properties of nebulae vary enormously and depend on their composition as well as the environment in which they are situated. Emission nebula are powered by young, massive environment and/or experienced similar petrogenetic processes, and mixing of material between these nebula reservoirs may have occurred. Warren (2011) determined that the isotope signatures of ε54Cr, ε50Ti, and ε62Ni can be utilized to resolve carbonaceous from non-carbonaceous meteorites; the carbonaceous meteorites have positive values for all of these elements, while the non-carbonaceous meteorites have negative values. An example coupled Δ17O vs. 54Cr diagram is shown below to demonstrate the separation between carbonaceous and non-carbonaceous meteorites. It can be seen that the chondrite GRO 5551, and by inference NWA 5492, both plot in the non-carbonaceous field.

Diagram credit: P. Warren, GCA, vol. 75, p. 6916 (2011)
‘Stable isotopes and the noncarbonaceous derivation of ureilites, in common with nearly all differentiated planetary materials’
(http://dx.doi.org/10.1016/j.gca.2011.09.011) The Hf–W age determined for NWA 5492 is very old, falling within 0.7 m.y. of CAISub-millimeter to centimeter-sized amorphous objects found typically in carbonaceous chondrites and ranging in color from white to greyish white and even light pink. CAIs have occasionally been found in ordinary chondrites, such as the L3.00 chondrite, NWA 8276 (Sara Russell, 2016). CAIs are also known as refractory inclusions since they formation, which possibly dates the stage of nebular metal–silicateThe most abundant group of minerals in Earth's crust, the structure of silicates are dominated by the silica tetrahedron, SiO44-, with metal ions occurring between tetrahedra). The mesodesmic bonds of the silicon tetrahedron allow extensive polymerization and silicates are classified according to the amount of linking that occurs between the condensation (Friend et al., 2011). It is proposed that NWA 5492 represents a new chondrite type having close affinities (e.g., chemical, textural, isotopic, metal composition) to GRO 95551. Both meteorites share elemental abundance ratios that may have some relationship to E and H chondrites, but which plot away from known chondrite groups. Evidence favors a nebular condensateIn the solar nebula, product of a chemical condensation reaction where a mineral phase precipitates (condenses) directly from a cooling vapor. origin (vs. impact origin) for the majority of the components in NWA 5492 (Weisberg et al., 2011); it is composed of the same type of volatile-depleted, reduced material that is believed to have accreted to form the primitive Earth (Friend et al., 2011). By comparison to the highly-reduced, low-FeO, metal-rich group of chondrites, and to the highly-reduced, metal-rich, chondrites designated ‘HH chondrites’, the latter considered by some to be the parental source of IIE irons (e.g., J. T. Wason, 2017), the silicates in NWA 5492 and GRO 95551 are much more reduced and have a lower Ni content in metal. Such extensive reductionOxidation and reduction together are called redox (reduction and oxidation) and generally characterized by the transfer of electrons between chemical species, like molecules, atoms or ions, where one species undergoes oxidation, a loss of electrons,  while another species undergoes reduction, a gain of electrons. This transfer of electrons between reactants features preclude them from being the precursor material of either of these groups (Humayun and Weisberg, 2012; Weisberg et al., 2015). A range of shock levels (S1 to S3–5) for NWA 5492 has been reported by different investigators utilizing different samples; the observation of S1 might be attributable to post-shock annealing (Weisberg et al., 2015); features in GRO 95551 are consistent with shock stageA petrographic assessment, using features observed in minerals grains, of the degree to which a meteorite has undergone shock metamorphism. The highest stage observed in 25% of the indicator grains is used to determine the stage. Also called "shock level".               S3. The CRE age of NWA 5492 is ~8 m.y. (3He, 21Ne, and 38Ar; Friend et al., 2011). It has been demonstrated that a plot of two meteorites on a coupled Δ17O vs. ε54Cr diagram is one of the best diagnostic tools for determining possible genetic relationships between them (Sanborn et al., 2014). High-precision Cr-isotopic analysis (ε53Cr and ε54Cr) of both NWA 5492 and GRO 95551 were conducted by Sanborn et al. (2015). The results show that NWA 5492 and GRO 95551 are indistinguishable in their Cr-isotopic compositions, consistent with their similarity in O-isotopic compositions previously determined. Furthermore, although the ε54Cr values show that these two meteorites are not associated with any of the carbonaceous chondriteCarbonaceous chondrites represent the most primitive rock samples of our solar system. This rare (less than 5% of all meteorite falls) class of meteorites are a time capsule from the earliest days in the formation of our solar system. They are divided into the following compositional groups that, other than groups, only through the combined Δ17O vs. ε54Cr plot is it evident that NWA 5492 and GRO 95551 are also not genetically related to the E chondrite groups. Data obtained thus far (e.g., petrologic, isotopic, silicate and metal composition) indicate that NWA 5492 and GRO 95551 derive from a similar unique isotopic reservoir, but further research as well as new recoveries could show that they share a common parent body. It was recommended by Weisberg et al. (2015) that these two meteorites be termed ‘G chondrites’ after the first described type specimen GRO 95551. The specimen of NWA 5492 shown above is a 2.15 g thin partial slice, ~1 mm in thickness. The small vesicles which are visible in the magnified image are attributed to degassing of hydrated clasts during impacts onto the parent body (Perron et al., 2008). The photos below show the high free metal component in this meteoriteWork in progress. A solid natural object reaching a planet’s surface from interplanetary space. Solid portion of a meteoroid that survives its fall to Earth, or some other body. Meteorites are classified as stony meteorites, iron meteorites, and stony-iron meteorites. These groups are further divided according to their mineralogy and specimen and in a full slice curated by the Chicago Field Museum, as well as a close-up image from Michael Farmer. 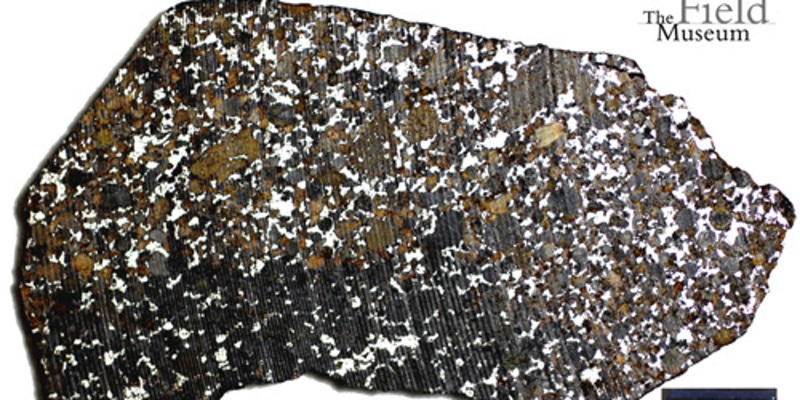 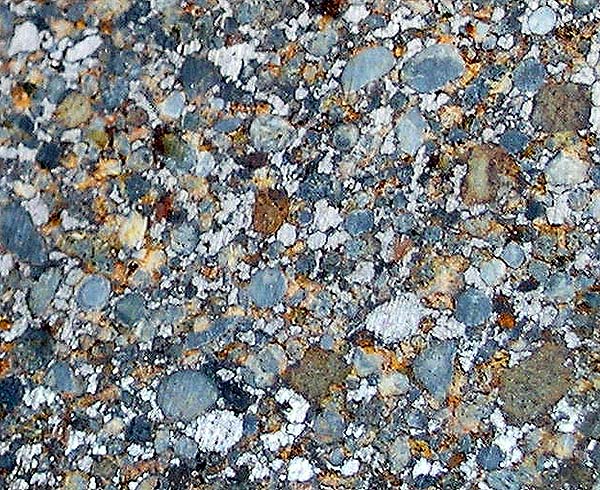