Area on the surface containing meteorites and fragments from a single fallMeteorite seen to fall. Such meteorites are usually collected soon after falling and are not affected by terrestrial weathering (Weathering = 0). Beginning in 2014 (date needs confirmation), the NomComm adopted the use of the terms "probable fall" and "confirmed fall" to provide better insight into the meteorite's history. If. Also applied to the area covered by tektites, which are produced by large meteoriteWork in progress. A solid natural object reaching a planet’s surface from interplanetary space. Solid portion of a meteoroid that survives its fall to Earth, or some other body. Meteorites are classified as stony meteorites, iron meteorites, and stony-iron meteorites. These groups are further divided according to their mineralogy and impacts. Strewnfields are often oval-shaped with the largest specimens
found at one end. Given that the largest specimens go the greatest distance, a meteoroid’s flight direction can be roughly determined from the size pattern in the strewnfield. The Australasian strewnfield, which covers ~10% of Earth’s surface, is the largest and the youngest of tektiteNatural, silica-rich glasses produced by melting of target rocks and dispersal as droplets during terrestrial impact events. In contrast to most impact glasses, which are found inside or within the immediate vicinity of impact structures, tektites are distal impact ejecta. They range in color from black or dark brown to strewnfields. This ~800,000 year-old field includes most of Southeast Asia, and extends across the ocean to include the Philippines, Indonesia, Malaya and Java and reaches far out into the Indian Ocean and south to the western side of Australia. The impact craterCrater formed by high-speed impact of a meteoroid, asteroid, or comet on a solid surface. Craters are a common feature on most moons (an exception is Io), asteroids, and rocky planets, and range in size from a few cm to over 1,000 km across. There is a general morphological progression may have been between 32 and 114 km in diameter. 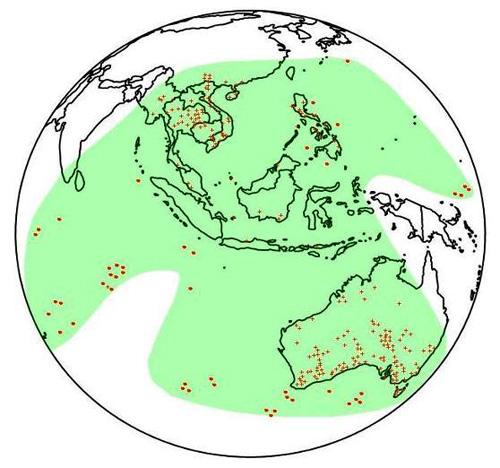