Natural, silica-rich glasses produced by melting of target rocks and dispersal as droplets during terrestrial impact events. In contrast to most impact glasses, which are found inside or within the immediate vicinity of impact structures, tektites are distal impact ejectaFractured and/or molten rocky debris thrown out of a crater during a meteorite impact event, or, alternatively, material, including ash, lapilli, and bombs, erupted from a volcano.. They range in color from black or dark brown to gray or green and most are spherical in shape. Many specimens exhibit aerodynamic shaping caused by atmospheric passage while molten. Tektites have been found in four geographically extended deposits or "strewn fields" on Earth’s surface: North America, Central Europe, Ivory Coast, and Australasia. Source craters are known for three of the four tektite strewn fields. The 11-km diameter Bosumtwi CraterBowl-like depression ("crater" means "cup" in Latin) on the surface of a planet, moon, or asteroid. Craters range in size from a few centimeters to over 1,000 km across, and are mostly caused by impact or by volcanic activity, though some are due to cryovolcanism. (1.07 Ga) is linked to the Ivory Coast tektites, the 24-km diameter Ries Crater (15 Ma) is the source of the Central European tektites, and the 85-km diameter Chesapeake Bay impact structure (35 Ma) is the source crater of the North American tektites. 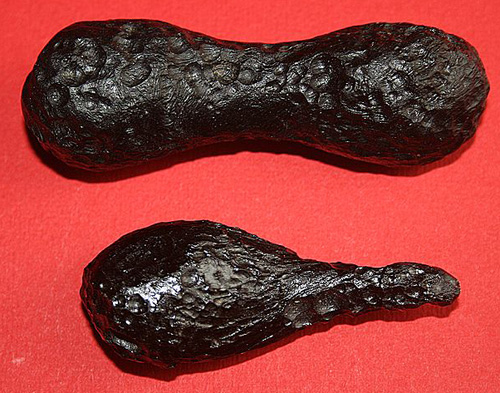