Spherical region of ionized hydrogenLightest and most common element in the universe (~92% by atoms; ~75% by mass). Hydrogen's isotopes are: • 1H (99.9885 %)
• 2H (0.0115 %), also called deuterium.
• 3H, also called Tritium, is a radioactive (t½ = 12.32 y) by-product of atmospheric thermonuclear tests in Earth's hydrosphere and atmosphere.
(HII) around a single or tight cluser of young stars of spectral classes O or B. THe region is ionized by the strong UV radiation produced by such stars. The size of the sphere is controlled by two main factors: (1) radiation output of the central star(s), with hotter more radiantPoint on the celestial sphere from which meteors of a given shower appear to radiate. The effect is due to perspective. star(s) producing larger spheres, and (2) gas densityMass of an object divided by its volume. Density is a characteristic property of a substance (rock vs. ice, e.g.). Some substances (like gases) are easily compressible and have different densities depending on how much pressure is exerted upon them. The Sun is composed of compressible gases and is much of the surrounding cloud, with denser gas yielding smaller spheres. 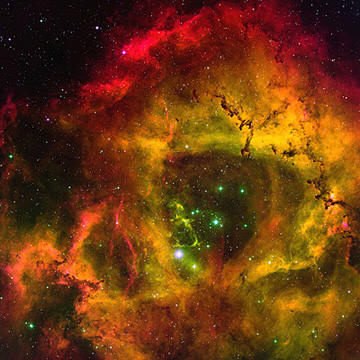 Strömgren sphere of the Rosette NebulaAn immense interstellar, diffuse cloud of gas and dust from which a central star and surrounding planets and planetesimals condense and accrete. The properties of nebulae vary enormously and depend on their composition as well as the environment in which they are situated. Emission nebula are powered by young, massive.