Meta-LL
Possibly brachinite-related
(Primitive achondriteAchondrite with an almost chondritic composition with age similar to the primordial chondrites. These should be better classified as "metachondrites"., ungroupedModifying term used to describe meteorites that are mineralogically and/or chemically unique and defy classification into the group or sub-group they most closely resemble. Some examples include Ungrouped Achondrite (achondrite-ung), Ungrouped Chondrite (chondrite-ung), Ungrouped Iron (iron-ung), and Ungrouped Carbonaceous (C-ung). in MetBull 98) 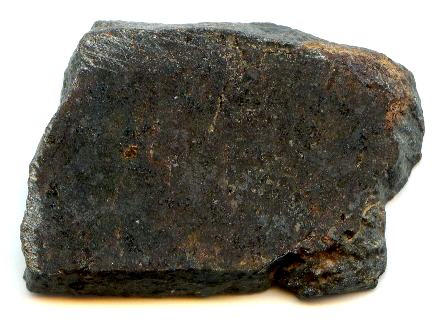 Found March 2008
no coordinates recorded Nine small stones having a combined weight of 130 g were found near Alargoug, Morocco, and subsequently sold in June 2008 to meteoriteWork in progress. A solid natural object reaching a planet’s surface from interplanetary space. Solid portion of a meteoroid that survives its fall to Earth, or some other body. Meteorites are classified as stony meteorites, iron meteorites, and stony-iron meteorites. These groups are further divided according to their mineralogy and dealer G. Hupé. A sample was submitted for analysis and classification to the University of Washington in Seattle (A. Irving and S. Kuehner), and NWA 5297 was determined to be a completely metamorphosed chondriteChondrites are the most common meteorites accounting for ~84% of falls. Chondrites are comprised mostly of Fe- and Mg-bearing silicate minerals (found in both chondrules and fine grained matrix), reduced Fe/Ni metal (found in various states like large blebs, small grains and/or even chondrule rims), and various refractory inclusions (such (metachondriteTerm used to describe a metamorphosed chondrite. Also referred to as a type 7 chondrite. Metachondrites are texturally evolved rocks derived from chondritic precursors and some have been classified as primitive achondrites.) with similarities to the LL chondriteOrdinary chondrites ("low Fe" / "low metal") with only 1 to 3% free metal. Their olivine is more Fe-rich than in the other ordinary chondrites (Fa27-32), implying that the LL types must have formed under more oxidizing conditions than their H or L cousins. Orthopyroxene compositions are also Fe-the rich group.

Northwest Africa 5297 is composed of olivineGroup of silicate minerals, (Mg,Fe)2SiO4, with the compositional endpoints of forsterite (Mg2SiO4) and fayalite (Fe2SiO4). Olivine is commonly found in all chondrites within both the matrix and chondrules, achondrites including most primitive achondrites and some evolved achondrites, in pallasites as large yellow-green crystals (brown when terrestrialized), in the silicate portion, orthopyroxeneOrthorhombic, low-Ca pyroxene common in chondrites. Its compositional range runs from all Mg-rich enstatite, MgSiO3 to Fe-rich ferrosilite, FeSiO3. These end-members form an almost complete solid solution where Mg2+ substitutes for Fe2+ up to about 90 mol. % and Ca substitutes no more than ~5 mol. % (higher Ca2+ contents occur, and very sodic plagioclaseAlso referred to as the plagioclase feldspar series. Plagioclase is a common rock-forming series of feldspar minerals containing a continuous solid solution of calcium and sodium: (Na1-x,Cax)(Alx+1,Si1-x)Si2O8 where x = 0 to 1. The Ca-rich end-member is called anorthite (pure anorthite has formula: CaAl2Si2O8) and the Na-rich end-member is albite, along with minor taeniteLess common than kamacite, both taenite and kamacite are Ni-Fe alloys found in iron meteorites. Taenite, γ-(Fe,Ni), has 27-65 wt% Ni, and forms small crystals that appear as highly reflecting thin ribbons on the etched surface of a meteorite; the name derives from the Greek word for "ribbon." and Ni-bearing troiliteBrass colored non-magnetic mineral of iron sulfide, FeS, found in a variety of meteorites.. It is a texturally evolved meteorite that exhibits a poikiloblastic structure (finer-grained inclusions of one mineralInorganic substance that is (1) naturally occurring (but does not have a biologic or man-made origin) and formed by physical (not biological) forces with a (2) defined chemical composition of limited variation, has a (3) distinctive set of of physical properties including being a solid, and has a (4) homogeneous embedded within larger crystals of another mineral) and lacks any relict chondrulesRoughly spherical aggregate of coarse crystals formed from the rapid cooling and solidification of a melt at  ~1400 ° C. Large numbers of chondrules are found in all chondrites except for the CI group of carbonaceous chondrites. Chondrules are typically 0.5-2 mm in diameter and are usually composed of olivine. The O-isotopic composition of NWA 5297 was analyzed at the Carnegie Institute in Washington D.C. by D. Rumble III, and subsequently by Greenwood et al. (2017). This meteorite was shown to have affinities to the LL-chondrite group (see diagram below).

Diagram credit: Greenwood et al., Chemie der Erde, vol. 77, p. 24 (2017)
‘Melting and differentiationA process by which a generally homogeneous chondritic body containing mostly metal, silicates and sulfides will melt and form distinct (differentiated) layers of different densities.   When the melting process continues for a long enough period of time, the once chondritic body will re-partition into layers of different composition including of early-formed asteroids: The perspective from high precision oxygenElement that makes up 20.95 vol. % of the Earth's atmosphere at ground level, 89 wt. % of seawater and 46.6 wt. % (94 vol. %) of Earth's crust. It appears to be the third most abundant element in the universe (after H and He), but has an abundance only isotopeOne of two or more atoms with the same atomic number (Z), but different mass (A). For example, hydrogen has three isotopes: 1H, 2H (deuterium), and 3H (tritium). Different isotopes of a given element have different numbers of neutrons in the nucleus. studies’
(open access: http://dx.doi.org/10.1016/j.chemer.2016.09.005) However, NWA 5297 has a greater abundance (~10 vol%) of FeNi-metal than would be expected for an LL-chondrite parent bodyThe body from which a meteorite or meteoroid was derived prior to its ejection. Some parent bodies were destroyed early in the formation of our Solar System, while others like the asteroid 4-Vesta and Mars are still observable today. that had experienced a high degree of metamorphism. Furthermore, it was determined that the the olivine composition of NWA 5297 lies outside the range for equilibrated LL chondritesChondrites are the most common meteorites accounting for ~84% of falls. Chondrites are comprised mostly of Fe- and Mg-bearing silicate minerals (found in both chondrules and fine grained matrix), reduced Fe/Ni metal (found in various states like large blebs, small grains and/or even chondrule rims), and various refractory inclusions (such, and the meteorite was recognized by Dunlap et al. (2015) as being similar to the brachinites. They also found that silicates in NWA 5297 plot in the brachinite field on an Fe/Mn vs. Fe/Mg coupled diagram. Based on Al–Mg systematics, Dunlap et al. (2015) calculated an upper limit of <4.5679 b.y. ago for the timing of Al/Mg fractionationConcentration or separation of one mineral, element, or isotope from an initially homogeneous system. Fractionation can occur as a mass-dependent or mass-independent process. during differentiation on the NWA 5297 parent body. With all of these characteristics taken together, NWA 5297 might be considered as ungrouped, but possibly related to the brachinites. The specimen of NWA 5297 shown above is a 2.78 g partial slice.