MesosideriteOne of two main types of stony-iron meteorite, the other being pallasites. Mesosiderites are a mixture of approximately 50% basaltic, gabbroic and orthopyroxenitic silicates and 50% Ni-Fe metal and sulfides. The name derives from the Greek "mesos" meaning "middle" or "half" and "sideros" for "iron;" hence "half-iron". The silicates are, group 1A 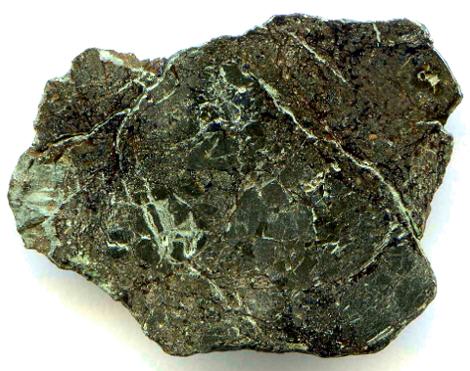 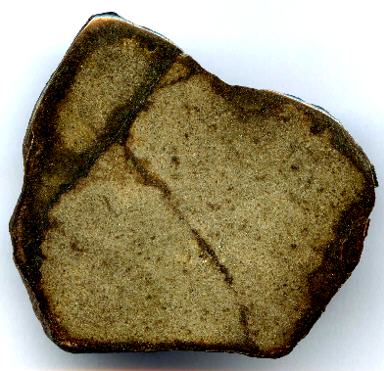 Found during or before 1861
25° 45′ S., 70° 30′ W. approx. The first of many large masses of this polymict, metal–silicateThe most abundant group of minerals in Earth's crust, the structure of silicates are dominated by the silica tetrahedron, SiO44-, with metal ions occurring between tetrahedra). The mesodesmic bonds of the silicon tetrahedron allow extensive polymerization and silicates are classified according to the amount of linking that occurs between the brecciaWork in Progress ... A rock that is a mechanical mixture of different minerals and/or rock fragments (clasts). A breccia may also be distinguished by the origin of its clasts: (monomict breccia: monogenetic or monolithologic, and polymict breccia: polygenetic or polylithologic). The proportions of these fragments within the unbrecciated material was found by a prospector in Atacama, Chile, ~100 miles SE of Taltal. The discovery was first reported by the Chilean geologist Ignacy Domeyko in 1862, in a landscape described as vegetation-free, sand and gravel covered open plains, crossed by dry river beds. Possibly many tons of Vaca Muerta were found and subsequently broken apart by 19th century miners to retrieve the metal-rich portion for smelting. 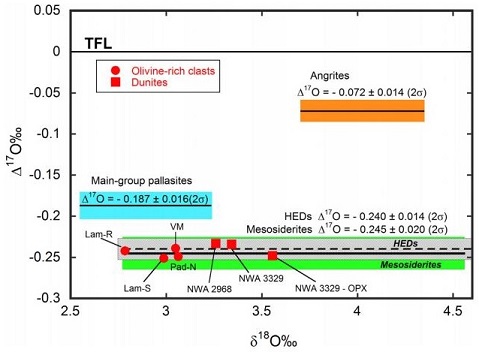 Diagram credit: Greenwood et al., 2017
For an explanation of the diagram components see the open access article in Chemie der Erde, vol. 77, p. 25 (2017)
‘Melting and differentiation of early-formed asteroids: The perspective from high precision oxygenElement that makes up 20.95 vol. % of the Earth's atmosphere at ground level, 89 wt. % of seawater and 46.6 wt. % (94 vol. %) of Earth's crust. It appears to be the third most abundant element in the universe (after H and He), but has an abundance only isotopeOne of two or more atoms with the same atomic number (Z), but different mass (A). For example, hydrogen has three isotopes: 1H, 2H (deuterium), and 3H (tritium). Different isotopes of a given element have different numbers of neutrons in the nucleus. studies’
(http://dx.doi.org/10.1016/j.chemer.2016.09.005) 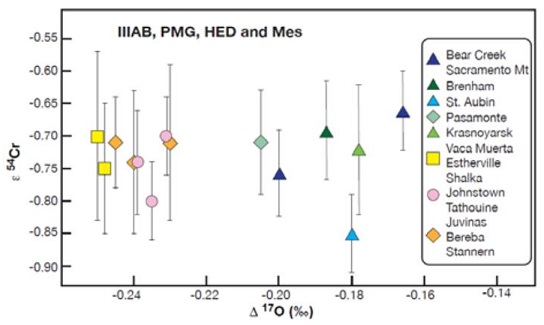 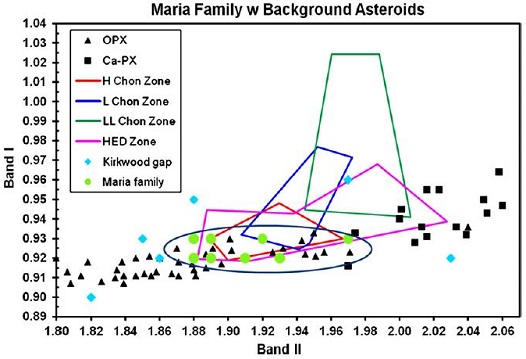 Diagram credit: Fieber-Beyer et al., Icarus, vol. 213, #2, p. 534, (2011)
‘The Maria asteroid family: Genetic relationships and a plausible source of mesosiderites near the 3:1 Kirkwood Gap’
(https://doi.org/10.1016/j.icarus.2011.03.009) Based on silicate matrixFine grained primary and silicate-rich material in chondrites that surrounds chondrules, refractory inclusions (like CAIs), breccia clasts and other constituents. textures, Vaca Muerta has been placed into group 1A. (see the Bondoc page for further information about the grouping scheme). It is theorized by one investigative team that VestaThird largest and fourth brightest asteroid; it was discovered in 1807 by Heinrich Olbers and named for the ancient Roman goddess of the hearth. 4 Vesta has a basaltic surface composition and an average density not much less than that of Mars. Evidently lava once flowed here indicating that the and the Vestoids, along with the isotopically similar mesosiderites and IIAB irons, were themselves the products of a catastrophic breakup of an even larger parent object which they have named ‘Opis’ (Irving et al., 2009). In Greek mythology, Opis was the wife of Saturn, whose children were Jupiter, Neptune, Pluto, Juno, Ceres, and Vesta. The left photo above shows a 9.1 g end section of a metallic-melt host phase of Vaca Muerta, while the right shows a 51.6 g end section of a naturally faceted, eucritic inclusionFragment of foreign (xeno-) material enclosed within the primary matrix of a rock or meteorite. likely formed from a localized impact melt of an existing cumulate eucrite lithology (photos not to the same scale).