AchondriteAn achondrite is a type of stony meteorite whose precursor was of chondritic origin and experienced metamorphic and igneous processes. They have a planetary or differentiated asteroidal origin where the chondritic parent body reached a sufficient size that through heating due to radioactive decay of 26Al (aluminum isotope) and gravitational, ungroupedModifying term used to describe meteorites that are mineralogically and/or chemically unique and defy classification into the group or sub-group they most closely resemble. Some examples include Ungrouped Achondrite (achondrite-ung), Ungrouped Chondrite (chondrite-ung), Ungrouped Iron (iron-ung), and Ungrouped Carbonaceous (C-ung).
carbonaceous chondrite-related
(EucriteMost common type of achondrite meteorite and a member of the HED group. Eucrites are basalts composed primarily of pigeonite and anorthite (An60-98). Eucrites have been placed into three subgroups based on mineralogical and chemical differences. • Non-cumulate eucrites represent the upper crust that solidified on a magma ocean after in MetBull 84) 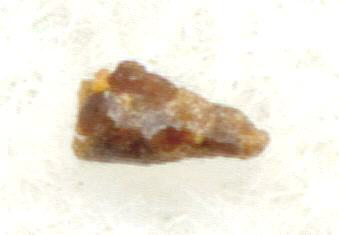 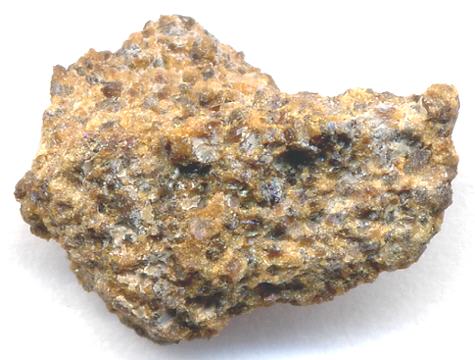 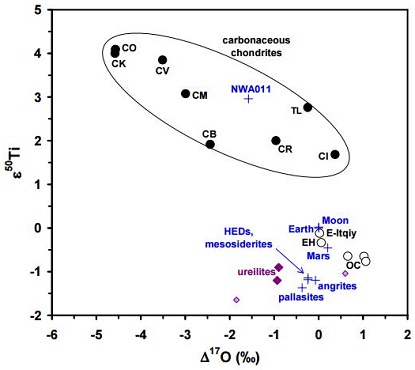 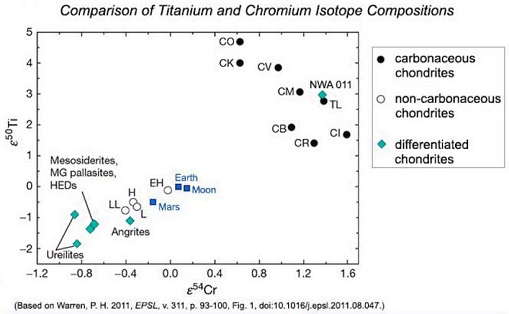 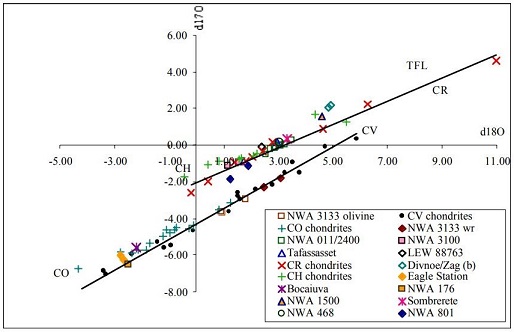 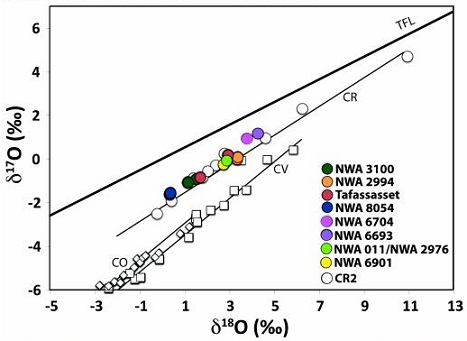 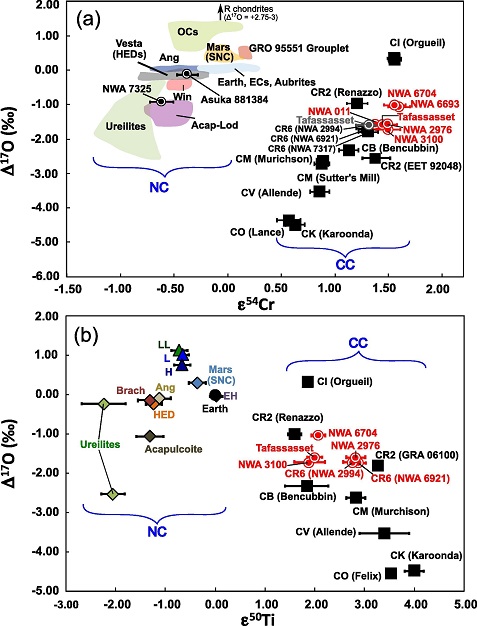 click on image for a magnified view Diagrams credit: Sanborn et al., GCA, vol. 245, pp. 577–596 (2019)
‘Carbonaceous Achondrites Northwest Africa 6704/6693: Milestones for Early Solar SystemThe Sun and set of objects orbiting around it including planets and their moons and rings, asteroids, comets, and meteoroids. Chronology and Genealogy’
(https://doi.org/10.1016/j.gca.2018.10.004) In an isotope systematics study, Sugiura and Yamaguchi (2007) reported the Mn–Cr age for NWA 011 as 4.5623 (±0.0026) b.y., while the Al–Mg age was calculated to be 4.5627 (±0.0003) b.y. Other Al–Mg age results include 4.5633 (±0.0005) b.y., determined by Schiller et al. (2010), and 4.56310 (±0.00038) b.y., determined by Bouvier et al. (2011) for the paired meteorite NWA 2976. The Sugiura and Yamaguchi (2007) ages are concordant with each other, and likely represent the meteorite’s crystallization age 3–5 m.y. after CAISub-millimeter to centimeter-sized amorphous objects found typically in carbonaceous chondrites and ranging in color from white to greyish white and even light pink. CAIs have occasionally been found in ordinary chondrites, such as the L3.00 chondrite, NWA 8276 (Sara Russell, 2016). CAIs are also known as refractory inclusions since they formation; such an early crystallization would be consistent with an asteroidal origin rather than a planetary origin (Scott et al., 2009). In addition, these ages are nearly identical to the ages calculated for the oldest eucrites and the quenched angrites such as Sahara 99555. The Sm–Nd age of NWA 011, calculated to be 4.46 (±0.04) b.y. (Nyquist et al., 2003), is younger than the calculated Mn–Cr and Al–Mg ages, possibly reflecting late metamorphicRocks that have recrystallized in a solid state due to changes in temperature, pressure, and chemical environment. resetting. A more precise crystallization age was calculated by Bouvier et al. (2011) utilizing the paired NWA 2976. Employing the 238U/235U value of 137.751, the absolute Pb–Pb age was calculated to be 4.56289 (±0.00059) b.y. This age is concordant with the Al–Mg age anchored to the D’Orbigny angriteType of evolved achondrite meteorite that represent some of the earliest stages of asteroidal differentiation and magmatism in our solar system. Angrites are named for the Angra dos Reis meteorite, which fell in Rio de Janeiro, Brazil, in early 1869. They are basaltic (mafic) rocks, often containing porous areas, and and a Type B CAI from the CV3 chondriteChondrites are the most common meteorites accounting for ~84% of falls. Chondrites are comprised mostly of Fe- and Mg-bearing silicate minerals (found in both chondrules and fine grained matrix), reduced Fe/Ni metal (found in various states like large blebs, small grains and/or even chondrule rims), and various refractory inclusions (such NWA 2364. This likely represents the crystallization age of the basaltic meteorite in the crustOutermost layer of a differentiated planet, asteroid or moon, usually consisting of silicate rock and extending no more than 10s of km from the surface. The term is also applied to icy bodies, in which case it is composed of ices, frozen gases, and accumulated meteoritic material. On Earth, the of this parent asteroid. Further studies have been conducted by Sanborn et al. (2018) of new anomalous ungrouped meteorites recovered in Northwest Africa. Utilizing a coupled Δ17O vs. ε54Cr diagram, they demonstrated that NWA 011 and pairings, NWA 6704 and pairings, and NWA 6962/7680 all plot within the CR/CH carbonaceous chondrite field represented by CR2 Renazzo and CH3 NWA 2210, which suggests that a genetic relationship exists among them (see diagram below). Chromium vs. Oxygen-isotope Plot 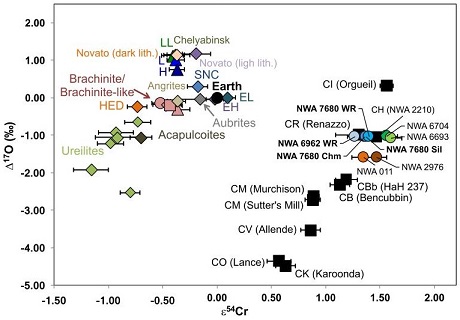