PallasiteOne of two main classes of stony-iron meteorite, the other being mesosiderites. Pallasites are igneous in nature and characterized by crystals of olivine, sometimes peridot (green gem quality clear olivine crystals), embedded in a matrix of Fe-Ni metal. The type specimen, weighing 680 kg, was found in the mountains near, Eagle Station group
(possibly CK- or CO-related) 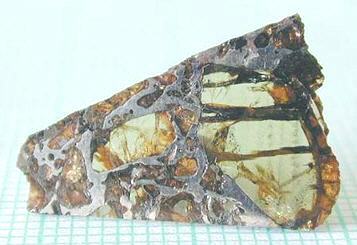 ‘The Butterfly’
Found 1880
38° 37′ N., 84° 58′ W. A 36.5 kg mass was found about 0.75 miles from Eagle Station, Carroll County, Kentucky. Eagle Station has the highest fayalitePure* iron end-member (Fe2SiO4) of the olivine solid solution series and an important mineral in meteorites. When iron (Fe) is completely substituted by magnesium, it yields the the pure Mg-olivine end-member, forsterite (Mg2SiO4). The various Fe and Mg substitutions between these two end-members are described based on their forsteritic (Fo) and Ni contents of all other pallasites, while Cold Bay and Itzawisis have nearly the same levels. In 2010 the Karavannoe pallasite was recognized as the the fourth member of this pallasite grouplet (Korochantsev et al., 2013), and in 2012 the fifth member, Oued Bourdim 001, was found—the grouplet has become a group. In consideration of these and other anomalous elemental ratios (e.g., high Ge/Ga, high Ni, and high Ir), along with unique O-isotopic ratios, these pallasites define a group distinct from the pallasites of the main-group, the pyroxene-bearing pallasites, and the other ungroupedModifying term used to describe meteorites that are mineralogically and/or chemically unique and defy classification into the group or sub-group they most closely resemble. Some examples include Ungrouped Achondrite (achondrite-ung), Ungrouped Chondrite (chondrite-ung), Ungrouped Iron (iron-ung), and Ungrouped Carbonaceous (C-ung). pallasites Milton and Choteau. It is noteworthy however that Milton plots proximate to the O-isotopic trend line (CCAM slope) of the CV–CK-related meteorites and the Eagle Station pallasites (Korochantsev et al., 2013) (see diagram below). Also of interest is that the ‘Vermillion pallasite grouplet’ of pyroxeneA class of silicate (SiO3) minerals that form a solid solution between iron and magnesium and can contain up to 50% calcium. Pyroxenes are important rock forming minerals and critical to understanding igneous processes. For more detailed information, please read the Pyroxene Group article found in the Meteoritics & Classification category. pallasites, comprising Vermillion, Choteau, and Y-8451, plots with the acapulcoite-lodranite clan on an oxygen three-isotope diagram.

It was determined by Papanastassiou and Chen (2011) that the 54Cr isotopic compositions among the chromiteBrownish-black oxide of chromium and iron (Cr-Fe oxide), Cr2FeO4, found in many meteorite groups. and olivineGroup of silicate minerals, (Mg,Fe)2SiO4, with the compositional endpoints of forsterite (Mg2SiO4) and fayalite (Fe2SiO4). Olivine is commonly found in all chondrites within both the matrix and chondrules, achondrites including most primitive achondrites and some evolved achondrites, in pallasites as large yellow-green crystals (brown when terrestrialized), in the silicate portion phases in Eagle Station are different from those of CV chondritesMeteorite class named after the Vigarano meteorite that fell in Italy in 1910. They have abundant large, well-defined rimless (?) chondrules of magnesium-rich olivine (~0.7 mm diameter; 40-65 vol. %), often surrounded by iron sulfide. They also contain 7-20 vol. % CAIs. The often dark-gray matrix is dominated by Fe-rich, and consequently these differences in ε54Cr must also exist between the Eagle Station pallasite and carbonaceous chondriteCarbonaceous chondrites represent the most primitive rock samples of our solar system. This rare (less than 5% of all meteorite falls) class of meteorites are a time capsule from the earliest days in the formation of our solar system. They are divided into the following compositional groups that, other than precursor material. Despite the established O-isotopic similarities, this ε54Cr heterogeneity across the two groups calls into question the existence of a genetic relationship between them. In an effort to better resolve potential genetic relationships that might exist, a Cr-isotopic analysis of olivine from the Milton pallasite was conducted by Sanborn et al. (2018). Sanborn and Yin (2019) demonstrated on a coupled Δ17O vs. ε54Cr diagram that Milton plots among the CV clan with the achondrites NWA 7822 and NWA 10503, and it is plausible that they share a genetic relationship. Furthermore, they also demonstrated that Eagle Station plots closer to the CK (or CO) chondrite group along with the achondriteAn achondrite is a type of stony meteorite whose precursor was of chondritic origin and experienced metamorphic and igneous processes. They have a planetary or differentiated asteroidal origin where the chondritic parent body reached a sufficient size that through heating due to radioactive decay of 26Al (aluminum isotope) and gravitational NWA 8186. It could be inferred that both the CV and CK planetesimalsHypothetical solid celestial body that accumulated during the last stages of accretion. These bodies, from ~1-100 km in size, formed in the early solar system by accretion of dust (rock) and ice (if present) in the central plane of the solar nebula. Most planetesimals accreted to planets, but many – experienced a similar petrogenetic history in a similar isotopic reservoir of the nascent solar systemThe Sun and set of objects orbiting around it including planets and their moons and rings, asteroids, comets, and meteoroids. (see diagram below). 17O vs. ε54Cr for Carbonaceous Achondrites

click on photo for a magnified view Diagrams credit: Sanborn and Yin, 50th LPSC, #1498 (2019)
In a more recent isotopic analysis of Eagle Station, Dey et al. (2019) obtained a Δ17O value of –4.93 ‰, which is more consistent with that of the CK chondrites. They employed newly obtained 17O and ε54Cr values for several irons, a pallasite, and their associated silicates/oxides to investigate i) if each iron/pallasite and the associated phases originated on a common parent body (i.e., an endogenous mixture of coreIn the context of planetary formation, the core is the central region of a large differentiated asteroid, planet or moon and made up of denser materials than the surrounding mantle and crust. For example, the cores of the Earth, the terrestrial planets and differentiated asteroids are rich in metallic iron-nickel. and mantleMain silicate-rich zone within a planet between the crust and metallic core. The mantle accounts for 82% of Earth's volume and is composed of silicate minerals rich in Mg. The temperature of the mantle can be as high as 3,700 °C. Heat generated in the core causes convection currents in vs. an exogenous mixture through impact), and ii) if any genetic connection exists between the irons/pallasite and other meteoriteWork in progress. A solid natural object reaching a planet’s surface from interplanetary space. Solid portion of a meteoroid that survives its fall to Earth, or some other body. Meteorites are classified as stony meteorites, iron meteorites, and stony-iron meteorites. These groups are further divided according to their mineralogy and groups (e.g., IAB with winonaites, IIE with H chondrites, and Eagle Station pallasites with CK chondrites). It was demonstrated on an O–Cr coupled diagram (UCD in diagram below) that the ε54Cr values for both the silicates and the oxide phase (chromite) in Eagle Station are identical and indicate an origin from a common reservoir—and thus, less consistent with an impact origin for the pallasite. Other results from their study can be found on the Caddo County and Miles pages. 17O vs. ε54Cr for Irons and Pallasites 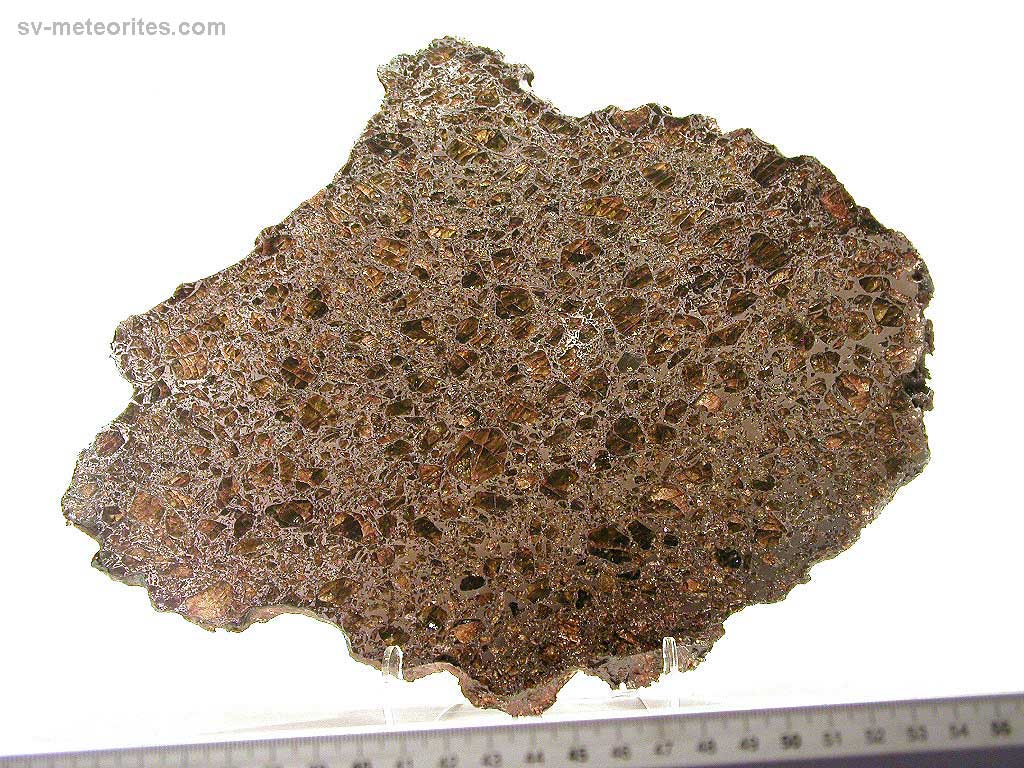