MesosideriteOne of two main types of stony-iron meteorite, the other being pallasites. Mesosiderites are a mixture of approximately 50% basaltic, gabbroic and orthopyroxenitic silicates and 50% Ni-Fe metal and sulfides. The name derives from the Greek "mesos" meaning "middle" or "half" and "sideros" for "iron;" hence "half-iron". The silicates are, group 0B 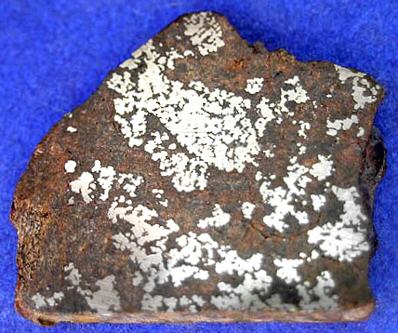 Purchased June 2003
no coordinates recorded A complete, fusion-crusted, stony-iron meteoriteMeteorite composed of roughly equal amounts by weight of silicate minerals and Ni-Fe metal. The stony-irons consist of two groups: mesosiderites and pallasites. However, there is gradual shading into metal-rich stony meteorites such as the lodranites (once considered stony-irons) and silicate-rich iron meteorites. Stony-iron meteorites are less abundant than their weighing 1,374 g was purchased in Morocco on behalf of A. and G. Hupé. A sample was sent to the University of Washington in Seattle (A. Irving and S. Kuehner) for analysis and classification, and NWA 1878 was determined to be a type-B mesosiderite. It was further ascertained that the mass was paired with the 728 g mesosiderite NWA 1817 (A. Irving and S. Kuehner, UWS), purchased in Morocco in January of 2003 for N. Oakes, as well as being paired with several other independently classified masses (e.g., NWA 1979 and NWA 2042) for a total combined weight of at least 6.4 kg. Continued research was conducted by Bunch et al. (2014) on these specimens and a large number of mesosiderite samples previously considered to represent a separate fallMeteorite seen to fall. Such meteorites are usually collected soon after falling and are not affected by terrestrial weathering (Weathering = 0). Beginning in 2014 (date needs confirmation), the NomComm adopted the use of the terms "probable fall" and "confirmed fall" to provide better insight into the meteorite's history. If. It was eventually determined that all of these mesosiderites represent a single strewn fieldArea on the surface containing meteorites and fragments from a single fall. Also applied to the area covered by tektites, which are produced by large meteorite impacts. Strewnfields are often oval-shaped with the largest specimens found at one end. Given that the largest specimens go the greatest distance, a meteoroid's (totaling at least 80 kg) comprising mesosiderites of differing subgroups (see also NWA 1827). Northwest Africa 1817 (=1878) was described as a coarse-grained, unbrecciated, plutonicGeology: Igneous intrusive body that forms when magma is injected into host rocks and solidifies. Plutons occur in the crust of asteroids undergoing differentiation or planets. Named after Pluto, the Roman god of the underworld. Plutonic rocks are the rocks found within a pluton. Astronomy: Category of planet including all igneous-textured assemblage of spheroidal FeNi-metal–silicateThe most abundant group of minerals in Earth's crust, the structure of silicates are dominated by the silica tetrahedron, SiO44-, with metal ions occurring between tetrahedra). The mesodesmic bonds of the silicon tetrahedron allow extensive polymerization and silicates are classified according to the amount of linking that occurs between the clusters together with a larger component of silicate material (predominantly orthopyroxeneOrthorhombic, low-Ca pyroxene common in chondrites. Its compositional range runs from all Mg-rich enstatite, MgSiO3 to Fe-rich ferrosilite, FeSiO3. These end-members form an almost complete solid solution where Mg2+ substitutes for Fe2+ up to about 90 mol. % and Ca substitutes no more than ~5 mol. % (higher Ca2+ contents occur with lesser amounts of plagioclaseAlso referred to as the plagioclase feldspar series. Plagioclase is a common rock-forming series of feldspar minerals containing a continuous solid solution of calcium and sodium: (Na1-x,Cax)(Alx+1,Si1-x)Si2O8 where x = 0 to 1. The Ca-rich end-member is called anorthite (pure anorthite has formula: CaAl2Si2O8) and the Na-rich end-member is albite), along with minor silicaSilicon dioxide, SiO2., troiliteBrass colored non-magnetic mineral of iron sulfide, FeS, found in a variety of meteorites., chromiteBrownish-black oxide of chromium and iron (Cr-Fe oxide), Cr2FeO4, found in many meteorite groups., and merrillite, plus rare olivineGroup of silicate minerals, (Mg,Fe)2SiO4, with the compositional endpoints of forsterite (Mg2SiO4) and fayalite (Fe2SiO4). Olivine is commonly found in all chondrites within both the matrix and chondrules, achondrites including most primitive achondrites and some evolved achondrites, in pallasites as large yellow-green crystals (brown when terrestrialized), in the silicate portion grains and clasts of eucritic and diogenitic composition (Bunch et al., 2004). OxygenElement that makes up 20.95 vol. % of the Earth's atmosphere at ground level, 89 wt. % of seawater and 46.6 wt. % (94 vol. %) of Earth's crust. It appears to be the third most abundant element in the universe (after H and He), but has an abundance only isotopeOne of two or more atoms with the same atomic number (Z), but different mass (A). For example, hydrogen has three isotopes: 1H, 2H (deuterium), and 3H (tritium). Different isotopes of a given element have different numbers of neutrons in the nucleus. values for NWA 1817 were obtained at Carnegie Institution, Washington D.C. (D. Rumble, III), and the meteoriteWork in progress. A solid natural object reaching a planet’s surface from interplanetary space. Solid portion of a meteoroid that survives its fall to Earth, or some other body. Meteorites are classified as stony meteorites, iron meteorites, and stony-iron meteorites. These groups are further divided according to their mineralogy and plots in the field of the mesosiderites on an oxygen three-isotope diagram (see below).

Diagram courtesy of the Meteoritical Bulletin: Oxygen Isotope Plots Direct Link Ample petrographic evidence exists to support the hypothesis for a two-stage irradiation history for mesosiderites (Hidaka and Yoneda, 2011). In the first stage, occurring >4.4 b.y. ago, the silicate component of a large (~200–400 km diameter) parent bodyThe body from which a meteorite or meteoroid was derived prior to its ejection. Some parent bodies were destroyed early in the formation of our Solar System, while others like the asteroid 4-Vesta and Mars are still observable today. was irradiated near the surface, prior to mesosiderite formation. Subsequent to differentiationA process by which a generally homogeneous chondritic body containing mostly metal, silicates and sulfides will melt and form distinct (differentiated) layers of different densities.   When the melting process continues for a long enough period of time, the once chondritic body will re-partition into layers of different composition including of this planetesimal, a low velocity collision occurred with a large (~50–150 km diameter) iron projectile ~4.4 b.y. ago, melting and mixing the cool silicate layer of the planetesimal with the molten FeNi-metal of the projectile forming complex breccias. The partial or total collisional disruption and gravitational reassembly of the target body is considered a strong likelihood by some investigators (Haack et al., 1996), while others favor a scenario in which a severe impact caused molten metalElement that readily forms cations and has metallic bonds; sometimes said to be similar to a cation in a cloud of electrons. The metals are one of the three groups of elements as distinguished by their ionization and bonding properties, along with the metalloids and nonmetals. A diagonal line drawn from the differentiated, molten coreIn the context of planetary formation, the core is the central region of a large differentiated asteroid, planet or moon and made up of denser materials than the surrounding mantle and crust. For example, the cores of the Earth, the terrestrial planets and differentiated asteroids are rich in metallic iron-nickel. of the planetesimal itself to be mixed with the cooler silicates from the mantleMain silicate-rich zone within a planet between the crust and metallic core. The mantle accounts for 82% of Earth's volume and is composed of silicate minerals rich in Mg. The temperature of the mantle can be as high as 3,700 °C. Heat generated in the core causes convection currents in (Scott et al., 2001). After a brief period of rapid cooling resulting from the mixing of cold and hot material, NWA 1878 experienced very slow cooling at ~0.01 °C/year consistent with deep burial of the mesosiderite precursor material under an extensive debris blanket and/or within lavaHot molten or semifluid rock derived from a volcano or surface fissure from a differentiated and magmatically active parent body. flows (Sugiura and Kimura, 2015). Other mesosiderites including NWA 1242, Crab Orchard, ALH 77219, and A-882023 also cooled much more slowly from peak temperatures down to intermediate temperatures, while others including Estherville, Vaca Muerta, NWA 2924, and Dong Ujimqin Qi experienced rapid cooling over the same temperature range indicative of a residence nearer the surface. Over time, reductionOxidation and reduction together are called redox (reduction and oxidation) and generally characterized by the transfer of electrons between chemical species, like molecules, atoms or ions, where one species undergoes oxidation, a loss of electrons,  while another species undergoes reduction, a gain of electrons. This transfer of electrons between reactants processes were initiated, while episodic impact events on this large, slowly cooling body caused remelting, metal–silicate mixing and brecciationThe formation of a breccia through a process by which rock fragments of of various types are recemented or fused together., formation of quench textures, mixing of deep silicates and near-surface silicates of eucritic and diogenitic compositions, regolithMixture of unconsolidated rocky fragments, soil, dust and other fine granular particles blanketing the surface of a body lacking an atmosphere. Regolith is the product of "gardening" by repeated meteorite impacts, and thermal processes (such as repeated heating and cooling cycles).   gardening, and degassing, ultimately resetting the Ar–Ar chronometer to reflect an age of ~3.6–3.9 b.y. Thereafter, impact excavation and ejection from the mesosiderite meteoroidSmall rocky or metallic object in orbit around the Sun (or another star). occurred, with calculated CRE ages of various mesosiderites reflecting multiple excavations over the past 10–150 m.y. Mesosiderites have been historically classified from type 1 to 4 in order of increasing degrees of thermal metamorphism due to impact-generated reheating. An in-depth analysis of the mesosiderite ALHA77219 was conducted by Agosto et al. in 1980, and they determined that the matrixFine grained primary and silicate-rich material in chondrites that surrounds chondrules, refractory inclusions (like CAIs), breccia clasts and other constituents. is fine-grained and that the pigeoniteLow-Ca clinopyroxene, (Ca,Mg,Fe)SiO3, found as a major mineral in eucrites and shergottites. In order to be considered pigeonite, the clinopyroxene must contain 5 to 20 mol % of calcium (Wo5 - 20). Chondrites of petrologic types 4 and below contain significant low-Ca clinopyroxene. During metamorphism to higher temperatures, all existing grains are anhedral rather than coarsely poikiloblastic, features consistent with minimal recrystallization and a classification as type 1B. Recently, Sugiura (2013) developed criteria for establishing the most primitive mesosiderite, the study of which could elucidate the earliest history of the mesosiderite parent body. He determined that NWA 1878 was the most primitive mesosiderite known based primarily on the following indicators:

Additional discrimination criteria for primitiveness were identified and investigated by Sugiura et al. (2013), such as the Al/(Al+Cr) ratio and the Ti concentration in Cr-spinel. It was determined that NWA 1878 was more primitive than either the 1B ALHA77219 or the 1A Vaca Muerta mesosiderites, and accordingly, NWA 1878 was designated the first mesosiderite of metamorphicRocks that have recrystallized in a solid state due to changes in temperature, pressure, and chemical environment. type 0B. The photo of NWA 1878 shown above is a 4.0 g partial slice acquired from M. Farmer. The top photo below shows a slice of NWA 1817 exhibiting the spherical metal grains (courtesy of M. Graul), while that below shows a portion of the main massLargest fragment of a meteorite, typically at the time of recovery. Meteorites are commonly cut, sliced or sometimes broken thus reducing the size of the main mass and the resulting largest specimen is called the "largest known mass". (courtesy of N. Oakes). 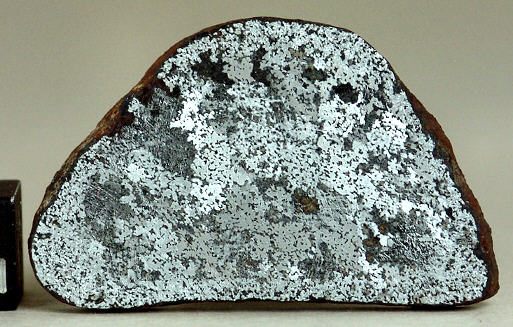 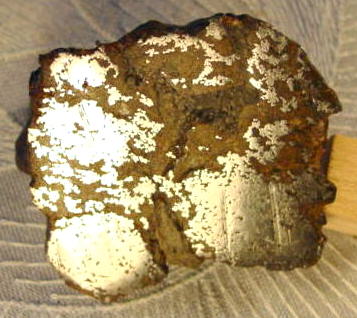