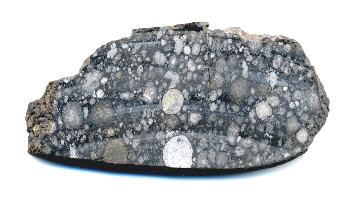 click on photos for a magnified view Found October 2001
no coordinates recorded A single small stone weighing 57.1 g was probably found near Boudnib, Morocco, and was subsequently purchased in Erfoud. Analysis was conducted at the Muséum National d’Histoire Naturelle in Paris. The analyses thus far have determined that NWA 1763 is a carbonaceous chondriteCarbonaceous chondrites represent the most primitive rock samples of our solar system. This rare (less than 5% of all meteorite falls) class of meteorites are a time capsule from the earliest days in the formation of our solar system. They are divided into the following compositional groups that, other than of the CV group with a petrologic typeMeasure of the degree of aqueous alteration (Types 1 and 2) and thermal metamorphism (Types 3-6) experienced by a chondritic meteorite. Type 3 chondrites are further subdivided into 3.0 through 3.9 subtypes. of 3.5 (Fa0.27–34.91; Fs0.69–2.34). It is both unshocked (S0) and unweathered (W0), with an unoxdized matrixFine grained primary and silicate-rich material in chondrites that surrounds chondrules, refractory inclusions (like CAIs), breccia clasts and other constituents. and an abundance of intact sulfide. The pristine condition of this CV3.5 chondriteChondrites are the most common meteorites accounting for ~84% of falls. Chondrites are comprised mostly of Fe- and Mg-bearing silicate minerals (found in both chondrules and fine grained matrix), reduced Fe/Ni metal (found in various states like large blebs, small grains and/or even chondrule rims), and various refractory inclusions (such should prove helpful in continued studies of this carbonaceous chondrite group.

The oxidized-Allende and reduced subgroups are separated on the basis of metalElement that readily forms cations and has metallic bonds; sometimes said to be similar to a cation in a cloud of electrons. The metals are one of the three groups of elements as distinguished by their ionization and bonding properties, along with the metalloids and nonmetals. A diagonal line drawn abundances and the Ni content of sulfide (Howard et al., 2010). The previously used discriminator, magnetiteFe oxide, Fe2+Fe3+2O4, containing oxidized iron (Fe3+) found in the matrix of carbonaceous chondrites and as diagnostic component in CK chondrites. In CK chondrites, magnetite is typically chromian, containing several wt. % Cr2O3. abundance, has been shown to overlap between oxidizedOxidation and reduction together are called redox (reduction and oxidation) and generally characterized by the transfer of electrons between chemical species, like molecules, atoms or ions, where one species undergoes oxidation, a loss of electrons,  while another species undergoes reduction, a gain of electrons. This transfer of electrons between reactants and reduced subgroups. The oxidized-Bali subgroup has a higher degree of aqueous alteration than oxidized-Allende (for more mineralogical relationships, see Appendix I, Carbonaceous Chondrites). The subgroup to which NWA 1763 belongs has not yet been published, but it likely belongs to the oxidized-Allende subgroup.

Some investigators (e.g., Greenwood et al., 2003 and Wasson et al., 2013) have proposed that the CK chondrites could represent an extension of the CV group. This subgroup is considered to reflect varying degrees of metamorphism including impact-generated crushing, thermal alteration, and recrystallization processes (Wasson et al., 2013). In a subsequent study, Dunn et al. (2016) compared magnetite in a number of CK and CV chondritesMeteorite class named after the Vigarano meteorite that fell in Italy in 1910. They have abundant large, well-defined rimless (?) chondrules of magnesium-rich olivine (~0.7 mm diameter; 40-65 vol. %), often surrounded by iron sulfide. They also contain 7-20 vol. % CAIs. The often dark-gray matrix is dominated by Fe-rich, and presented geochemical, mineralogical, and petrographic evidence which is more consistent with separate CV and CK parent bodies; details of their study can also be found on the Dhofar 015 page. The first naturally occuring quasicrystal, dubbed icosahedrite, was discovered by Princeton University scientists embedded in stishoviteDense, high-pressure phase of quartz; so far identified only in shock-metamorphosed, quartz-bearing rocks from meteorite impact craters. Stishovite was synthesized in 1961 before it was discovered at Meteor Crater, Arizona. Its structure consists of parallel chains of single SiO6 octahedra. The octahedra are on their sides, sharing opposing edges. Image grains inside a rare mineralInorganic substance that is (1) naturally occurring (but does not have a biologic or man-made origin) and formed by physical (not biological) forces with a (2) defined chemical composition of limited variation, has a (3) distinctive set of of physical properties including being a solid, and has a (4) homogeneous called khatyrkite. OxygenElement that makes up 20.95 vol. % of the Earth's atmosphere at ground level, 89 wt. % of seawater and 46.6 wt. % (94 vol. %) of Earth's crust. It appears to be the third most abundant element in the universe (after H and He), but has an abundance only isotopic values of the icosahedrite quasicrystals are similar to those of CV3 carbonaceous chondrites which suggests a common extraterrestrial origin in the solar nebula over 4.5 billion years ago (Bindi et al., 2012, PNAS). The specimen of NWA 1763 pictured above is a 3.35 g slice (some saw marks are evident in the photo). A photo of the complete, fresh stone as found is shown below. 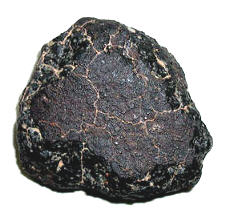