Supersonic flow of high-speed charged particles continuously blowing off a starSelf-luminous object held together by its own self-gravity. Often refers to those objects which generate energy from nuclear reactions occurring at their cores, but may also be applied to stellar remnants such as neutron stars. (mostly e- and p+). When originating from stars other than the SunOur parent star. The structure of Sun's interior is the result of the hydrostatic equilibrium between gravity and the pressure of the gas. The interior consists of three shells: the core, radiative region, and convective region. Image source: http://eclipse99.nasa.gov/pages/SunActiv.html. The core is the hot, dense central region in which the, it is sometimes called a "stellar" wind. The solar wind may be viewed as an extension of the coronaExtended outer atmosphere of the Sun. The glow of the corona is a million times less bright than that of the photosphere; it can only be seen when the disk of the Sun is blocked during a total solar eclipse, or by using a coronagraph, which artificially blocks the disk into interplanetary space. The solar wind emanates radially from all parts of the Sun: the fast wind originates from the coronal holes and the quiet Sun, whereas the slow wind arises from the coronal streamers. Active regions, which lie under closed magnetic loops, are also a source of the slow wind. 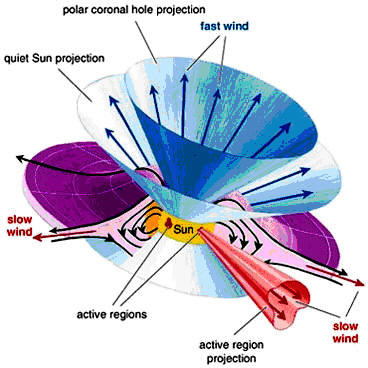 The solar wind contains roughly equal number of electrons and protons, along with a few heavier ions, and blows continuously from the surface of the Sun at an average velocity of ~400 km/s. The Sun’s solar wind leads to a loss of ~10-14 Msun per year. The solar wind is fractionated from the photospherePoint where a star's atmosphere appears to become completely opaque. Thus, the photosphere may be thought of as the imaginary surface from which the starlight that we see appears to be emitted. The photosphere is not a thin surface; the Sun's photosphere has a thickness of ~100 km. (Within that by the forces that accelerate the ions off of the Sun. This fractionationConcentration or separation of one mineral, element, or isotope from an initially homogeneous system. Fractionation can occur as a mass-dependent or mass-independent process. appears to be ordered by the first ionizationProcess whereby atoms lose one or more electrons to become cations. Ionization occurs by ionizing radiation or if an atom suffers a sufficiently violent collision. The “ionization potential” is the minimum amount of energy needed to remove an electron to infinity from the ground state. If the electron has already potential (FIP) of the elements (low-FIP elements tend to be over-abundant and high-FIP elements tend to be under-abundant).