ChondriteChondrites are the most common meteorites accounting for ~84% of falls. Chondrites are comprised mostly of Fe- and Mg-bearing silicate minerals (found in both chondrules and fine grained matrix), reduced Fe/Ni metal (found in various states like large blebs, small grains and/or even chondrule rims), and various refractory inclusions (such Click on Term to Read More, ungroupedModifying term used to describe meteorites that are mineralogically and/or chemically unique and defy classification into the group or sub-group they most closely resemble. Some examples include Ungrouped Achondrite (achondrite-ung), Ungrouped Chondrite (chondrite-ung), Ungrouped Iron (iron-ung), and Ungrouped Carbonaceous (C-ung). Click on Term to Read More (type 5+)
previously Winonaitea partially differentiated asteroid that was disrupted just as it began to form an Fe core and a silicate-rich crust. This disrupting impact mixed silicates into molten Ni-Fe metal forming the silicated IAB irons, and mixed olivine-rich residues of partial melts into unmelted silicates, forming the winonaites. A few winonaites Click on Term to Read More (primitive) or ‘W Chondrite’
originally AcapulcoitePrimitive achondrite that belongs to a small group named after the Acapulco meteorite that was observed to fall in Mexico in 1976. Acapulcoites are made mostly of fine-grained olivine (Fo3-14), orthopyroxene(En86-97), Ca-rich pyroxene (En51Wo44), plagioclase (An12-31), Ni-Fe metal, and troilite. They are transitional between primordial chondritic matter and more differentiated Click on Term to Read More (MetBull 85) 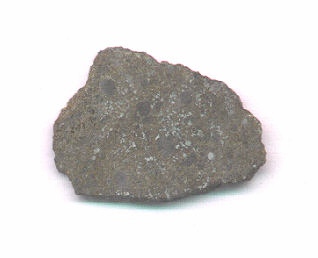 Found July 4, 2000
30° 36′ N., 5° 3′ E. Eleven pieces of a Moroccan meteoriteWork in progress. A solid natural object reaching a planet’s surface from interplanetary space. Solid portion of a meteoroid that survives its fall to Earth, or some other body. Meteorites are classified as stony meteorites, iron meteorites, and stony-iron meteorites. These groups are further divided according to their mineralogy and Click on Term to Read More, having a combined weight of 3,824 g (total weight of the entire pairing group is ~5.1 kg), were recovered by a French team under the organization of Bruno Fectay and Carine Bidaut. Although the coordinates of the recovery location in Tissemoumine, Morocco were recorded by GPS equipment, a NWA-series designation was accepted as the name for this meteorite by the Meteoritical Society NomCom. This primitive meteorite is of great interest due to its abundance of relict chondrulesRoughly spherical aggregate of coarse crystals formed from the rapid cooling and solidification of a melt at  ~1400 ° C. Large numbers of chondrules are found in all chondrites except for the CI group of carbonaceous chondrites. Chondrules are typically 0.5-2 mm in diameter and are usually composed of olivine Click on Term to Read More.

*Previously, Floss (2000) and Patzer et al. (2003) proposed that the acapulcoite/lodranite meteorites should be divided based on metamorphicRocks that have recrystallized in a solid state due to changes in temperature, pressure, and chemical environment. Click on Term to Read More stage:

A similar distinction could be made among the winonaites in our collections, although there is not yet an analog of the IAB complex irons for the acapulcoite/lodranite PB. Northwest Africa 1463 (and pairing group) ranks as the most primitive member of the winonaites, containing intact chondrules comparable to a petrologic typeMeasure of the degree of aqueous alteration (Types 1 and 2) and thermal metamorphism (Types 3-6) experienced by a chondritic meteorite. Type 3 chondrites are further subdivided into 3.0 through 3.9 subtypes. 5 chondrite (Benedix et al., 2003). However, most winonaites experienced extensive thermal metamorphism involving incipient sulfide melting and exhibit highly recrystallized textures, characteristics analogous to the ‘typical’ acapulcoites. Metamorphic progression in other winonaites led to partial loss of the low-melting phases FeS and plagioclase, and these are designated as a ‘transitional’ stage in the acapulcoite/lodranite metamorphic continuum. Those winonaites which experienced the highest temperatures ultimately crystallized from residual melt material, and they exhibit significant depletions in FeS, FeNi-metal, and plagioclase (including plagiophile trace elements). Samples representing this advanced metamorphic stage are known as lodranites in the acapulcoite/lodranite metamorphic sequence, while the term ‘evolved’ could be used to represent a similar metamorphic stage in the winonaite group (e.g., Tierra Blanca; Hunt et al., 2017). Although NWA 725 was initially classified as an acapulcoite, an O-isotopic analysis of a portion of the main mass (from the collection of S. Turecki) by the Open University, UK resolves the material within the winonaite field: ‘In particular, the Δ17O value of -0.431 is in reasonable agreement with the mean value of -0.48 for the winonaite–IAB complex group determined by Clayton and Mayeda (1996).’ In addition, when plotted on a diagram comparing Δ17O vs. Fa mol% in olivineGroup of silicate minerals, (Mg,Fe)2SiO4, with the compositional endpoints of forsterite (Mg2SiO4) and fayalite (Fe2SiO4). Olivine is commonly found in all chondrites within both the matrix and chondrules, achondrites including most primitive achondrites and some evolved achondrites, in pallasites as large yellow-green crystals (brown when terrestrialized), in the silicate portion Click on Term to Read More (Rumble III et al, 2005), NWA 725 (Fa6.1) and the winonaites NWA 1463 (Fa7.4; Δ17O = -0.45‰), NWA 1457 (Fa5; Δ17O = -0.40 [±0.03]‰), and NWA 1058 (Fa6.5; Δ17O = -0.53‰) all plot very close together within the winonaite field. The inference can thus be made that NWA 725 is actually a winonaite, likely paired with the primitive winonaites NWA 1463 and 1058 (NWA 1052 and NWA 1054 are also possible members of this pairing group; see Irving and Rumble III, 69th MetSoc, #5288 [2006]). 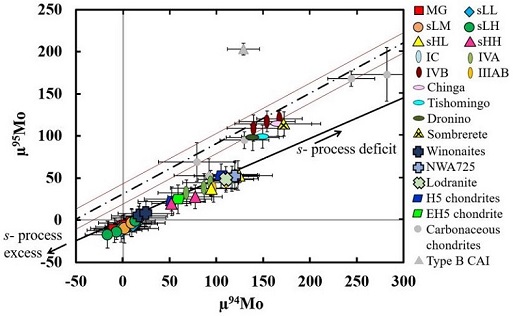 Diagrams credit: Worsham et al., Earth and Planetary Science Letters, vol. 467, pp. 157–166 (2017)
‘Characterizing cosmochemical materials with genetic affinities to the Earth: Genetic and chronological diversity within the IAB iron meteoriteMeteorite composed mainly of iron (Fe) and nickel (Ni) in the form of two alloys, kamacite and taenite. Due to their metallic makeup and extraordinary weight, iron meteorites are easily distinguished from ordinary rocks. Also, because they rarely break up in the air and suffer much less from the effects Click on Term to Read More complex’
(https://doi.org/10.1016/j.epsl.2017.02.044) Schmitz et al. (2016) conducted a Cr-isotopic analysis on a xenolithic inclusionFragment of foreign (xeno-) material enclosed within the primary matrix of a rock or meteorite. Click on Term to Read More from the L6 chondrite Villalbeto de la Peña, and on chrome-spinel grains from both the winonaite NWA 725 and the L6 chondrite Lundsgard. They demonstrated through a coupled Δ17O vs. ε54Cr diagram (shown below) that the Villalbeto de la Peña clastA mineral or rock fragment embedded in another rock. Click on Term to Read More plots with NWA 725 in the winonaite field. Northwest Africa 725 Chromium vs. Oxygen Isotope Plot

click on photo for a magnified view Diagram credit: Schmitz, B. et al., Nature Communications, vol. 7, p. 4 (2016, open access link)
‘A new type of solar-system material recovered from Ordovician marine limestone’
(https://doi.org/10.1038/ncomms11851)’ Further information about the classification of this meteorite and its probable pairings can be found on the NWA 1058 page. The NWA 725 specimen pictured above is a 1.3 g partial slice showing many distinct, intact chondrules. The photo below is an excellent petrographic thin sectionThin slice or rock, usually 30 µm thick. Thin sections are used to study rocks with a petrographic microscope. micrograph of NWA 725, shown courtesy of Peter Marmet. 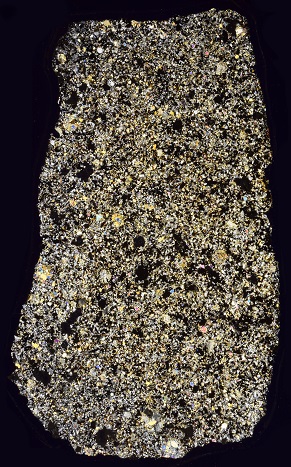