Lunar Feldspathic BrecciaWork in Progress ... A rock that is a mechanical mixture of different minerals and/or rock fragments (clasts). A breccia may also be distinguished by the origin of its clasts: (monomict breccia: monogenetic or monolithologic, and polymict breccia: polygenetic or polylithologic). The proportions of these fragments within the unbrecciated material
(crystalline impact-melt) 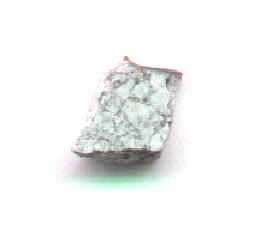 The rock was melted and brecciated, and clasts were introduced during a severe shock event, possibly occurring ~3.75 b.y. ago. Isotopic composition and elemental abundance studies indicate that the impactor component in the NWA482 impact melt breccia had a bulk composition comparable to an EH chondriteChondrites are the most common meteorites accounting for ~84% of falls. Chondrites are comprised mostly of Fe- and Mg-bearing silicate minerals (found in both chondrules and fine grained matrix), reduced Fe/Ni metal (found in various states like large blebs, small grains and/or even chondrule rims), and various refractory inclusions (such (Puchtel et al., 2008). Thereafter, the rock experienced a moderate shock event, possibly occurring ~2.4 b.y. ago, which resulted in shock meltingComplete melting of target material produced by the shock of a meteoric impact. Different minerals will experience certain shock effects at different pressures and temperatures. For example, dense target rocks like anorthosite will typically experience whole rock melting above 50 to 60 GPa, while chondritic rocks require more than 70 and the formation of the black, vesiculated, shock-melt veins and melt pockets in the form of quenched glass. Ultimately, this rock was ejected from the Moon in a separate impact event, likely responsible for some of the shock veins. This lunaite has a relatively high porosityThe volume percentage of a rock that consists of void space. Vesicular porosity is a type of porosity resulting from the presence of vesicles, or gas bubbles, in igneous rock such as the pumice presented here. Vesicular porosity is very rare in meteorites and is often associated with slag, one of ~13% (Warren et al., 2005). A more comprehensive treatment of this special meteorite is maintained by the owners at LunarRock.com. Northwest Africa 482 is similar to sample #65015 that was returned by Apollo 16 from the lunar highlandsThe highly cratered, topographically high, ancient crust of the Moon. This region is composed mostly of anorthosite, a plagioclase-rich rock., which is thought to be a sample of ancient lunar highlands, probably 4.4–4.5 b.y. old. However, in contrast to the Apollo samples, NWA 482 is derived from a KREEP-deficient terrane, more consistent with a location on the far side of the Moon. However, since an impact-melt breccia could be formed at a significant depth beneath the large-ion-lithophile contaminated regolith, its low-Th, low-Fe signature by itself is not an adequate determinant for either a nearside or a farside origin for this type of lunar meteorite (R. Korotev). Calzada-Diaz et al. (2015) compared compositional and age data from a large number of lunar meteoritesAchondrite meteorites from the surface of the Moon. Most were found in the hot deserts of northern Africa and Oman and others were found in the cold desert of Antarctica, although one, a 19-gram specimen, was recovered in 1990 from Calcalong Creek, Australia. These stones are of great importance because, with elemental remote sensing data obtained by the Lunar Prospector gamma rayMost energetic form of radiation, similar to x-rays and light, except with shorter wavelengths (<0.01 nm) and higher energies (>105 eV). Despite their high energies and penetrating power, g-rays from cosmic sources are absorbed by the atmosphere. In nuclear reactions, decay by g-ray emission permits an excited nucleus drop lower spectrometer, primarily for Fe, Ti, and Th, to better constrain the meteorite’s source regions. For the crystalline impact-melt breccia NWA 482, plausible ejection sites were identified in the Feldspathic Highland Terrane on the farside (see image below).

Image credit: A. Calzada-Diaz et al.
MeteoriticsScience involved in the study of meteorites and related materials. Meteoritics are closely connected to cosmochemistry, mineralogy and geochemistry. A scientist that specializes in meteoritics is called a meteoriticist. & Planetary Science, vol. 50, p. 222 (2015) Noble gasElement occurring in the right-most column of the periodic table; also called "inert" gases. In these gases, the outer electron shell is completely filled, making them very unreactive. studies indicate that NWA 482 records the longest residence in the lunar regolith observed to date—2.07 (±0.42) b.y—which occurred at a depth of >2.8 m (>500 g/cm² [shielding depth] divided by 1.8 g/cm³ [ave. regolith density]) (Lorenzetti et al., 2005). Northwest Africa 482 has a cosmic-ray exposure ageTime interval that a meteoroid was an independent body in space. In other words, the time between when a meteoroid was broken off its parent body and its arrival on Earth as a meteorite - also known simply as the "exposure age." It can be estimated from the observed effects of 280 t.y., and it arrived on Earth 8.6 (±1.3) t.y. ago (Nishiizumi, 2003). According to Nishiizumi and Caffee (2010), this relatively long Moon–Earth transitWhen a small celestial body moves in front of a much larger one (as when Mercury or Venus appears in silhouette against the solar disk or when a satellite passes in front of Jupiter or Saturn). The shadow of a satellite may also transit the disk of its primary. time would be consistent with a launch from a depth of >5.6 m. They determined that shallower launches from depths of <1–4.7 m correspond to the shortest transit times of <0.1 m.y. Through studies of cosmogenic nuclides, its pre-atmospheric diameter was calculated to be ~11–14 cm, while the presence of 26Al is indicative of relatively low ablationGradual removal of the successive surface layers of a material through various processes. • The gradual removal and loss of meteoritic material by heating and vaporization as the meteoroid experiences frictional melting during its passage through the atmosphere. The resulting plasma ablates the meteor and, in cases where a meteor, removing 1–1.5 cm from its surface. The specimen of NWA 482 pictured above is a 0.29 g partial slice displaying intricate microbrecciation. The top photo below shows the slice from which the above specimen was removed, while the bottom photo below shows a close-up of the large shock vein within the slice. 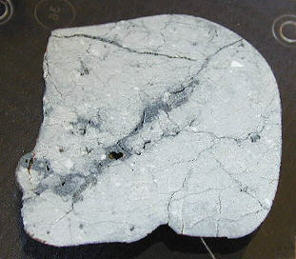 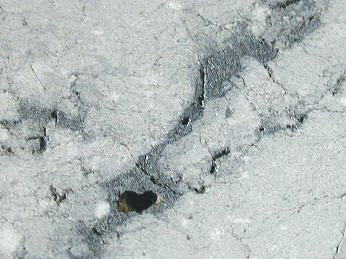 Photos courtesy of Anne Black—Impactika Meteorites The photos below show the complete oriented main massLargest fragment of a meteorite, typically at the time of recovery. Meteorites are commonly cut, sliced or sometimes broken thus reducing the size of the main mass and the resulting largest specimen is called the "largest known mass". exhibiting flow lines in the thin remnant crustOutermost layer of a differentiated planet, asteroid or moon, usually consisting of silicate rock and extending no more than 10s of km from the surface. The term is also applied to icy bodies, in which case it is composed of ices, frozen gases, and accumulated meteoritic material. On Earth, the or weathering rind. On the right is what might be the most beautiful photo taken of this awesome lunaite, showing a large cut face. A sizable portion of this rare meteorite has been donated for scientific study. 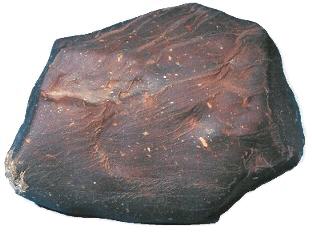 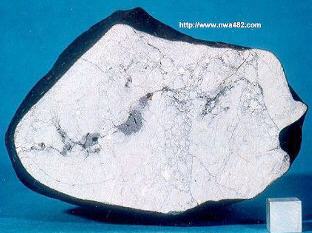