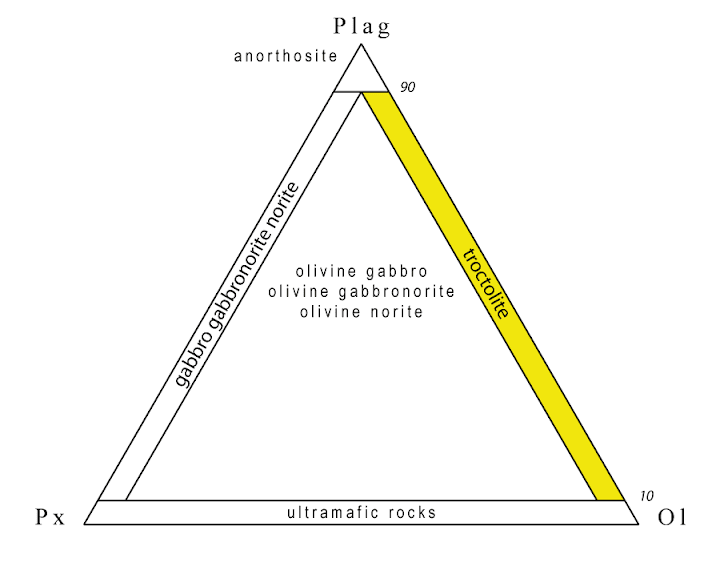 Troctolite is an intrusiveRefers to igneous rocks that crystallized underground. igneous rockOne of the three basic types of rock that also include sedimentary and metamorphic. Igneous rocks are formed by the solidification of magma and comprised predominately of silicate minerals. Based on bulk chemical analysis, igneous rocks can be grouped into four major groups based on their SiO2 content: 1. Felsic: consisting of plagioclaseAlso referred to as the plagioclase feldspar series. Plagioclase is a common rock-forming series of feldspar minerals containing a continuous solid solution of calcium and sodium: (Na1-x,Cax)(Alx+1,Si1-x)Si2O8 where x = 0 to 1. The Ca-rich end-member is called anorthite (pure anorthite has formula: CaAl2Si2O8) and the Na-rich end-member is albite feldsparAn alumino-silicate mineral containing a solid solution of calcium, sodium and potassium. Over half the Earth’s crust is composed of feldspars and due to their abundance, feldspars are used in the classification of igneous rocks. A more complete explanation can be found on the feldspar group page. and olivineGroup of silicate minerals, (Mg,Fe)2SiO4, with the compositional endpoints of forsterite (Mg2SiO4) and fayalite (Fe2SiO4). Olivine is commonly found in all chondrites within both the matrix and chondrules, achondrites including most primitive achondrites and some evolved achondrites, in pallasites as large yellow-green crystals (brown when terrestrialized), in the silicate portion. It is a member of gabbroic rocks family. It is compositionally similar to gabbroWork in progress Coarse-grained igneous rock of basaltic composition that formed at depth and is 90% plagioclase. clinopyroxene, https://www.sandatlas.org/gabbro/ The most important mineral groups that make up this rock type are plagioclase and pyroxene. Plagioclase usually predominates over pyroxene. Plagioclase is sodium-calcium feldspar. It contains more calcium than sodium in gabbro. If there is. The main difference is that it does not contain pyroxeneA class of silicate (SiO3) minerals that form a solid solution between iron and magnesium and can contain up to 50% calcium. Pyroxenes are important rock forming minerals and critical to understanding igneous processes. For more detailed information, please read the Pyroxene Group article found in the Meteoritics & Classification category. or contains very little while it is a major mineralInorganic substance that is (1) naturally occurring (but does not have a biologic or man-made origin) and formed by physical (not biological) forces with a (2) defined chemical composition of limited variation, has a (3) distinctive set of of physical properties including being a solid, and has a (4) homogeneous in gabbro. It can be described as pyroxene-depleted gabbro.

Troctolite is an olivine-bearing gabbroic rock without pyroxene.

The genesis of troctolite is also strongly tied to gabbro. These two rocks usually occur together in the same magmaMolten silicate (rock) beneath the surface of a planetary body or moon. When it reaches the surface, magma is called lava. intrusion because troctolite can not form directly as magma crystallizes. There is no way how magma can crystallize into olivine and plagioclase without pyroxene. Pyroxene crystals must be separated from the melt by a mechanism that leads to the formation of cumulateIgneous rock composed of crystals that have grown and accumulated (often by gravitational settling) in a cooling magma chamber. rocks.