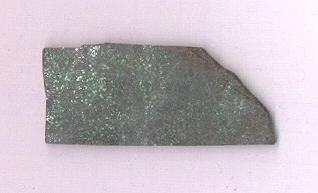 Found April 2001
no coordinates recorded A single highly-weathered stone weighing 2,250 g was found by villagers near Remlia, Morocco, in April 2001. Northwest Africa 974 is composed primarily of enstatiteA mineral that is composed of Mg-rich pyroxene, MgSiO3. It is the magnesium endmember of the pyroxene silicate mineral series - enstatite (MgSiO3) to ferrosilite (FeSiO3). and kamaciteMore common than taenite, both taenite and kamacite are Ni-Fe alloys found in iron meteorites. Kamacite, α-(Fe,Ni), contains 4-7.5 wt% Ni, and forms large body-centered cubic crystals that appear like broad bands or beam-like structures on the etched surface of a meteorite; its name is derived from the Greek word, along with minor plagioclaseAlso referred to as the plagioclase feldspar series. Plagioclase is a common rock-forming series of feldspar minerals containing a continuous solid solution of calcium and sodium: (Na1-x,Cax)(Alx+1,Si1-x)Si2O8 where x = 0 to 1. The Ca-rich end-member is called anorthite (pure anorthite has formula: CaAl2Si2O8) and the Na-rich end-member is albite, oldahmite, daubreelite, alabanditeMagnesium sulfide found in aubrites and EL chondrites. Its formula is MnS., schreibersiteNi-Fe phosphide mineral, (Fe,Ni)3P, yellowish in color and predominantly found in iron and stony-iron meteorites. Schreibersite can also be found in a variety of other meteorites including some acapulcoites, aubrites, enstatite chondrites and achondrites, lunars, ureilites, winonaites and a smattering of other meteorite types like CM, CO and CB. Schreibersite, troiliteBrass colored non-magnetic mineral of iron sulfide, FeS, found in a variety of meteorites., graphiteOpaque form of carbon (C) found in some iron and ordinary chondrites and in ureilite meteorites. Each C atom is bonded to three others in a plane composed of fused hexagonal rings, just like those in aromatic hydrocarbons. The two known forms of graphite, α (hexagonal) and β (rhombohedral), have and silicaSilicon dioxide, SiO2.. It is moderately shocked to stage S4.

Despite its high content of kamacite, long considered to be diagnostic of an EH classification, other compositional characteristics are more consistent with an EL classification. Indeed, it has been demonstrated by Macke et al. (2009) that these two groups do not actually differ in their iron content, and that they are indistinguishable in densityMass of an object divided by its volume. Density is a characteristic property of a substance (rock vs. ice, e.g.). Some substances (like gases) are easily compressible and have different densities depending on how much pressure is exerted upon them. The Sun is composed of compressible gases and is much, porosityThe volume percentage of a rock that consists of void space. Vesicular porosity is a type of porosity resulting from the presence of vesicles, or gas bubbles, in igneous rock such as the pumice presented here. Vesicular porosity is very rare in meteorites and is often associated with slag, one, and magnetic susceptibility as well; however, differences in siderophile, chalcophile, and other mineralogical abundances can be employed to distinguish the two groups. For example, the presence of alabandite rather than niningerite in NWA 974 is typically diagnostic of the EL group, as is the relatively high content of anorthiteRare compositional variety of plagioclase and the calcium end-member of the plagioclase feldspar mineral series with the formula CaAl2Si2O8. Anorthite is found in mafic igneous rocks such as anorthosite. Anorthite is abundant on the Moon and in lunar meteorites. However, anorthite is very rare on Earth since it weathers rapidly present. The classifying investigator (A. Jambon, Université Pierre & Marie Curie) believes that these features represent anomalous characteristics attributable to the high metamorphism which the stone has experienced, and he has suggested a classification of EH6 as most appropriate for this stone. Further studies should help resolve the ambiguity in the classification of this enstatite chondriteType of meteorite high in the mineral enstatite and also referred to as E-chondrites. Although they contain substantial amounts of Fe, it is in the form of Ni-Fe metal or sulfide rather than as oxides in silicates. Their highly reduced nature indicates that they formed in an area of the. On May 8, 2008 the classification of NWA 974 was revised by the Nomenclature Committee of the Meteoritical Society to reflect a recommendation of E6 chondriteChondrites are the most common meteorites accounting for ~84% of falls. Chondrites are comprised mostly of Fe- and Mg-bearing silicate minerals (found in both chondrules and fine grained matrix), reduced Fe/Ni metal (found in various states like large blebs, small grains and/or even chondrule rims), and various refractory inclusions (such, pending further analyses. The specimen of NWA 974 shown above is a 2.89 g partial slice.