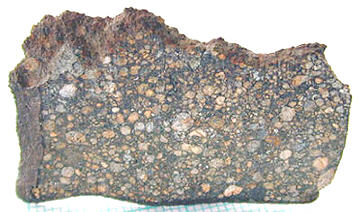 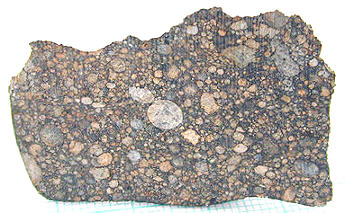 Fell January 21, 1946
47° 50′ N., 30° 46′ E. Following a shower of stones that fell over the Nicholayev region of the Ukraine, USSR, about 50 kg of stones were collected; they turned out to be one of the most primitive ordinary chondritesChondrites are the most common meteorites accounting for ~84% of falls. Chondrites are comprised mostly of Fe- and Mg-bearing silicate minerals (found in both chondrules and fine grained matrix), reduced Fe/Ni metal (found in various states like large blebs, small grains and/or even chondrule rims), and various refractory inclusions (such ever discovered. This is a highly unequilibrated chondriteA chondrite with heterogeneous mineral compositions (e.g., olivine grains with differing FeO/(FeO+MgO) ratios., poor in both metallic and oxidizedOxidation and reduction together are called redox (reduction and oxidation) and generally characterized by the transfer of electrons between chemical species, like molecules, atoms or ions, where one species undergoes oxidation, a loss of electrons,  while another species undergoes reduction, a gain of electrons. This transfer of electrons between reactants Fe. Due to the widely varying results obtained when utilizing the ratio of metallic to total Fe for distinguishing between an L3 and LL3 classification, less ambiguous criteria were employed (total Fe/Mg and Ni/Mg ratios, and Fe–S relationships) to establish a classification for Krymka of LL3. Early analyses of Krymka based on texture, TL sensitivity, highly volatileSubstances which have a tendency to enter the gas phase relatively easily (by evaporation, addition of heat, etc.). elementSubstance composed of atoms, each of which has the same atomic number (Z) and chemical properties. The chemical properties of an element are determined by the arrangement of the electrons in the various shells (specified by their quantum number) that surround the nucleus. In a neutral atom, the number of content, and silicateThe most abundant group of minerals in Earth's crust, the structure of silicates are dominated by the silica tetrahedron, SiO44-, with metal ions occurring between tetrahedra). The mesodesmic bonds of the silicon tetrahedron allow extensive polymerization and silicates are classified according to the amount of linking that occurs between the heterogeneity, were consistent with a sub-classification of LL3.0. However, subsequent studies led to its re-classification as LL3.1, consistent with a very mild metamorphicRocks that have recrystallized in a solid state due to changes in temperature, pressure, and chemical environment. history and retention of primary features.