Stars on the Asymptotic Giant BranchPath on the Hertzsprung-Russell diagram corresponding to the changes that a star undergoes after He burning ceases in the core. At this stage, the C core shrinks and drives the expansion of the envelope, and the star becomes a red supergiant., which represents a late stage of stellar evolutionChanges in a stars luminosity and temperature over its lifetime; conventionally, plotted on an Hertzsprung-Russell (HR) diagram. All stars, irrespective of their mass spend most of their lifetime on the main sequence. The more massive a star, the more luminous and hotter it is. As all stars age, they enter that all stars with initial masses < 8 Msun go through. At this late stage of stellar evolution, gas and dust are lifted off the stellar surface by massive winds that transfer material to the interstellar mediumMaterial between the stars, consisting of gas, dust and cosmic rays (high energy charged particles moving at nearly the speed of light). It comprises ~10% of visible matter in the disk of our Galaxy (Milky Way). Until recently it was generally assumed that silicates in the ISM were amorphous, but. Mass loss rates range from ~10-8 to 10-4 Msun per year. 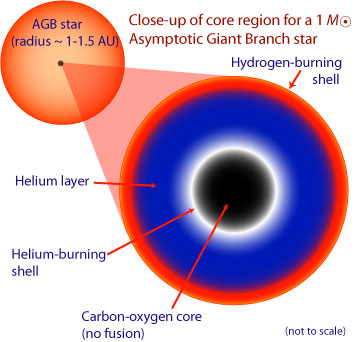