Changes in a stars luminosityBasic property used to characterize stars, luminosity is defined as the total energy radiated by a star each second. An object’s luminosity is often compared to that of the Sun (Lsun = 4 × 1033 ergs/s = 3.9 × 1026 Watts). Luminosity has the same units as power (energy per Click on Term to Read More and temperature over its lifetime; conventionally, plotted on an Hertzsprung-Russell (HR) diagram. All stars, irrespective of their mass spend most of their lifetime on the main sequence. The more massive a starSelf-luminous object held together by its own self-gravity. Often refers to those objects which generate energy from nuclear reactions occurring at their cores, but may also be applied to stellar remnants such as neutron stars., the more luminous and hotter it is. As all stars age, they enter a giant phase (their brightness remains constant, but the effective surface temperature decreases, 7 → 9). This reflects a change in the fusionProcess in which two lighter atomic nuclei combine to form a heavier atomic nucleus. Very high temperatures are normally required in order for atomic nuclei to collide with sufficient energy to overcome the Coulomb barrier (their mutual electrostatic repulsions). Fusion that occurs under high-temperature conditions is called thermonuclear fusion. Fusion Click on Term to Read More processes at work within the star: outer layers expand and are no longer of sites nuclear burning. As these layers cool, the star drifts towards the right side of the HR diagram. Subsequent evolution depends on the mass of the star. 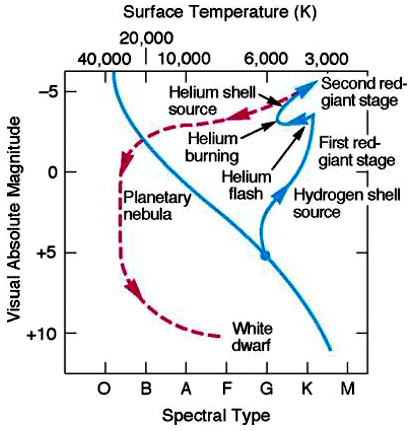 For a ~1 Msun star, when H burning ends, the coreIn the context of planetary formation, the core is the central region of a large differentiated asteroid, planet or moon and made up of denser materials than the surrounding mantle and crust. For example, the cores of the Earth, the terrestrial planets and differentiated asteroids are rich in metallic iron-nickel. Click on Term to Read More temperature is insufficient for He burning to occur. With no source of energy production in the core there is no longer any outward radiative pressure to resist gravitational collapse, and the outer regions of the star start to collapse (9 → 10). Collapse raises the temperature in the H shell and H fusion occurs.
Luminosity increases as the core continues to collapse and the temperature in the H shell keeps increasing. The burning shell also provides pressure on the outer layers of the star and causes them to expand. As the layers expand they cool and the star appears to become redder.

After just a few million years the H shell runs out of fuel. Once again the star contracts under its own weight. The compact core may flash into life for a short period and He be fused into C (10). The energy released in the He flash reaches the outer layers and the star becomes a red supergiant (11). Up to half its mass is thrown out into space and seen as a planetary nebulaAn immense interstellar, diffuse cloud of gas and dust from which a central star and surrounding planets and planetesimals condense and accrete. The properties of nebulae vary enormously and depend on their composition as well as the environment in which they are situated. Emission nebula are powered by young, massive Click on Term to Read More (12) leaving a white dwarfRemnant of a star with mass <8 Msun. White dwarfs have masses <1.4 Msun (the Chandrasekhar mass) and are supported by electron degeneracy pressure. White dwarfs have radii ~Rearth (<0.02 Rsun) and densities ~105-6 g/cm3. No nuclear fusion or gravitational contraction occurs in white dwarfs, they shine by residual heat. behind. 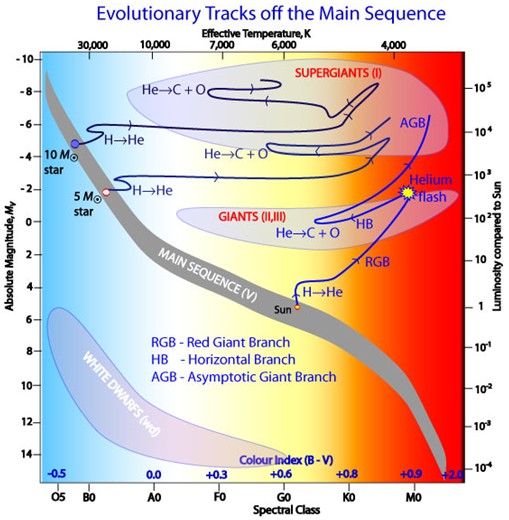 Stars with a mass of between 8 and 20 Msun have a more complex evolution. Initially, they evolve in the same way as low mass stars, turning into red giants and undergoing a core He burning phase. However, He burning is no longer the end phase of stellar evolution. When He in the core is exhausted, the additional mass allows stellar collapse to take place and the outer layers to reignite. A cross section through the star at this point would show an outer shell of H burning, an inner shell of He burning, and the core where C burning is taking place. Once the C supply is exhausted, O begins to fuse into Ne; the He shell becomes a C burning shell, the H shell a He burning shell and a new outer layer of H burning forms. Subsequently, Ne can fuse into Mg, into Si, and so on to Cr and Fe. 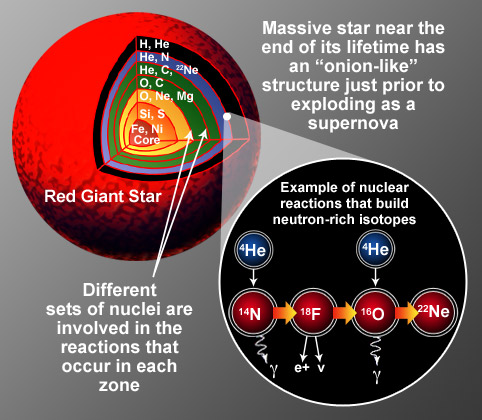 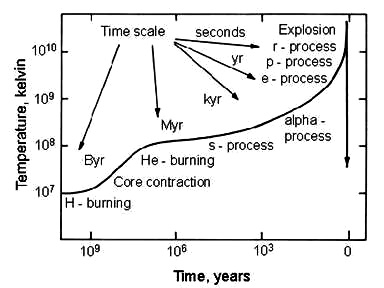 Stars with over 20 Msun evolve in the same way as their slightly less massive companions dying in a supernova explosion, but the core becomes a black holeMaximally gravitationally collapsed object predicted to exist by the theory of general relativity, from which no material object, light or signal of any kind can escape. Many black holes form when a high mass supergiant star explodes in a supernova explosion at the end of its life. A star probably Click on Term to Read More. A neutron star can mass up to around 3 Msun. After this point neutron degeneracy pressure is no longer sufficient to prevent core collapse. With nothing left to resist collapse the core condenses into an infinitely small, infinitely dense point called a black hole (singularityRegions of space where the density of matter, or the curvature of space-time, becomes infinite and the concepts of space and time cease to have any meaning. Singularities are predicted to occur in all black holes and in certain models of the Universe. For example, open Friedmann models of the).