One of the possible evolutionary endpoints of high mass stars. Stellar black holes have masses <100 Msun. Once the coreIn the context of planetary formation, the core is the central region of a large differentiated asteroid, planet or moon and made up of denser materials than the surrounding mantle and crust. For example, the cores of the Earth, the terrestrial planets and differentiated asteroids are rich in metallic iron-nickel. of the starSelf-luminous object held together by its own self-gravity. Often refers to those objects which generate energy from nuclear reactions occurring at their cores, but may also be applied to stellar remnants such as neutron stars. has completely burned to Fe, energy production stops and the core collapses resulting in a supernovaStellar explosion that expels much or all of the stellar material with great force, driving a blast wave into the surrounding space, and leaving a supernova remnant. Supernovae are classified based on the presence or absence of features in their optical spectra taken near maximum light. They were first categorized explosion. If the core is greater than ~2.3 Msun, the maximum mass of a neutron starDense ball of neutrons that remains at the core of a star after a supernova explosion has destroyed the rest of a star with mass 8-18 (?) Msun. A neutron star has mass ~2-3 Msun, density ~1014 g/cm3, and is supported by neutron degeneracy pressure. Typical neutron stars are 10-20, collapse continues and a stellar black holeMaximally gravitationally collapsed object predicted to exist by the theory of general relativity, from which no material object, light or signal of any kind can escape. Many black holes form when a high mass supergiant star explodes in a supernova explosion at the end of its life. A star probably is formed. These black holes are generally modeled as Kerr black holes, because the original rotation of the massive star would be conserved during the collapse. Stellar black holes are therefore most easily discovered in X-ray binaryClose binary system where a neutron star (or rarely a black hole) accretes matter from what is usually a main sequence star (left). X-ray binaries are some of the most luminous X-ray sources in the sky. X-rays are produced as material from the companion star is drawn to the compact systems, where gas from a companion star is being pulled into the black hole. X-raysHigh-energy electromagnetic radiation, with short wavelength (~10-0.01 nm) and high frequency (greater than ~1016 Hertz). Although the boundaries are somewhat arbitrary, wavelengths shorter than 0.01 nm are called gamma-rays and those longer than 10 nm extreme ultraviolet (EUV). X-rays would be produced by blackbody radiation at temperatures in excess of are produced by this gas which is heated to ~107 K as it spirals towards the black hole via an accretion diskDisk-shaped cloud of gas and solids in orbital motion around a central protostar or some other massive central body.. The mass of the black hole, typically 3–20 Msun, by observing its gravitational effect on the companion star.

About 20 X-ray binary systems are thought to contain stellar black holes. One of the best candidates is LMC X-3 in the Large Magellanic Cloud. Here the x-ray source is associated with a main sequence B3 star whose shape has been severely distorted by the gravitational field of its companion. The binary systemDefinable part of the universe that can be open, closed, or isolated. An open system exchanges both matter and energy with its surroundings. A closed system can only exchange energy with its surroundings; it has walls through which heat can pass. An isolated system cannot exchange energy or matter with has an orbital periodThe length of time it takes an orbiting object to make one complete trip around its primary body. The Earth’s orbital period around the Sun is 1 year and the Moon's is one 27.3 days. Mercury's orbital period is ~88 days (closest to the Sun) and Neptune's is ~165 years of 1.7 days. The mass of the compact object probably is considerably higher than >3 Msun. The Cygnus X-1 binary system, discovered in 1965, consists of a O9.7 Iab type supergiant and a compact object orbiting with a period of 5.6 days. The mass of the unseen companion is ~10 Msun. Cygnus X-1 is one of the brightest X-ray sources in the sky. A jet from the Cygnus X-1 source has ionized the interstellar mediumMaterial between the stars, consisting of gas, dust and cosmic rays (high energy charged particles moving at nearly the speed of light). It comprises ~10% of visible matter in the disk of our Galaxy (Milky Way). Until recently it was generally assumed that silicates in the ISM were amorphous, but, producing a spectacular bubble-like x-ray feature. 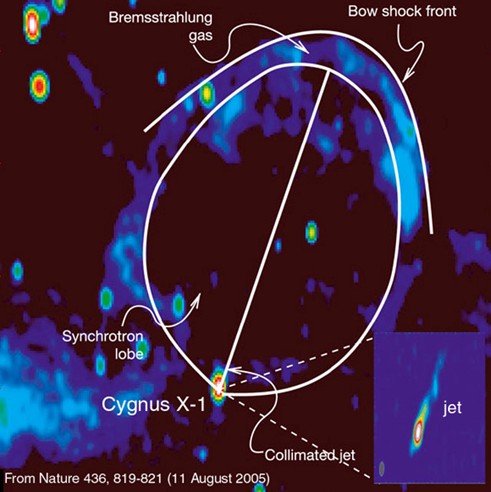