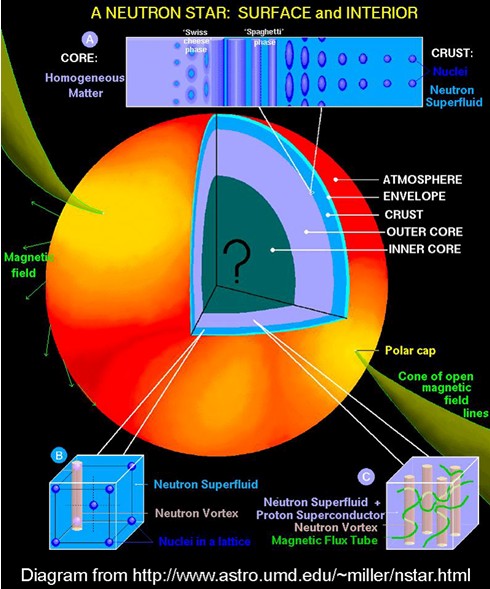 Dense ball of neutrons that remains at the coreIn the context of planetary formation, the core is the central region of a large differentiated asteroid, planet or moon and made up of denser materials than the surrounding mantle and crust. For example, the cores of the Earth, the terrestrial planets and differentiated asteroids are rich in metallic iron-nickel. of a starSelf-luminous object held together by its own self-gravity. Often refers to those objects which generate energy from nuclear reactions occurring at their cores, but may also be applied to stellar remnants such as neutron stars. after a supernovaStellar explosion that expels much or all of the stellar material with great force, driving a blast wave into the surrounding space, and leaving a supernova remnant. Supernovae are classified based on the presence or absence of features in their optical spectra taken near maximum light. They were first categorized explosion has destroyed the rest of a star with mass 8-18 (?) Msun. A neutronCharge-neutral hadron with a mass of 1.6748 x 10-27 kg, equivalent to 939.573 MeV, and an intrinsic angular momentum, or spin, of ½ (in units of h/2π). The neutron is a nucleon, one of the two basic constituents of all atomic nuclei (apart from 1H, which consists of a single star has mass ~2-3 Msun, densityMass of an object divided by its volume. Density is a characteristic property of a substance (rock vs. ice, e.g.). Some substances (like gases) are easily compressible and have different densities depending on how much pressure is exerted upon them. The Sun is composed of compressible gases and is much ~1014 g/cm3, and is supported by neutron degeneracy pressure. Typical neutron stars are 10-20 km across and have escape velocities ~70% speed of lightSpeed at which electromagnetic radiation propagates in a vacuum. Although referred to as the speed of light, this should be more properly called the 'speed of a massless particle’ as it is the speed at which all particles of zero mass (not only photons, but gravitons and massless neutrinos if. Neutron stars rotate extremely rapidly as a consequence of the conservation of angular momentum, and have incredibly strong magnetic fields due to conservation of magnetic flux. The relatively slowing rotating core of the massive precursor star increases its rotation rate enormously as it collapses to form the much smaller neutron star. At the same time, the magnetic field lines of the massive star are pulled closer together as the core collapses. This intensifies the magnetic field of the star to around 1012 times that of the Earth. The result is that neutron stars can rotate up to at least 60 times per second when born. If they are part of a binary systemDefinable part of the universe that can be open, closed, or isolated. An open system exchanges both matter and energy with its surroundings. A closed system can only exchange energy with its surroundings; it has walls through which heat can pass. An isolated system cannot exchange energy or matter with, they can increase this rotation rate through the accretionAccumulation of smaller objects into progressively larger bodies in the solar nebula leading to the eventual formation of asteroids, planetesimals and planets. The earliest accretion of the smallest particles was due to Van der Waals and electromagnetic forces. Further accretion continued by relatively low-velocity collisions of smaller bodies in the of material, to over 600 times per second!

Neutron stars that have lost energy through radiative processes have been observed to rotate as slowly as once every 8 seconds while still maintaining radio pulses, and neutron stars that have been braked by winds in X-ray systems can have rotation rates as slow as once every 20 minutes. Observations also reveal that the rotation rate of isolated neutron stars slowly changes over time, generally decreasing as the star ages and rotational energy is lost to the surroundings through the magnetic field (though occasionally glitches are seen). An example is the Crab pulsar, which is slowing its spin at a rate of 38 nanoseconds per day, releasing enough energy to power the Crab nebulaAn immense interstellar, diffuse cloud of gas and dust from which a central star and surrounding planets and planetesimals condense and accrete. The properties of nebulae vary enormously and depend on their composition as well as the environment in which they are situated. Emission nebula are powered by young, massive.