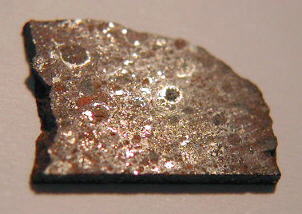 Found January 2000
z° 06′ 13′ N., w° 09′ 35′ W. A single stone weighing 70 g was found by the Labenne Family while searching for meteorites in the Sahara. This carbonaceous chondriteCarbonaceous chondrites represent the most primitive rock samples of our solar system. This rare (less than 5% of all meteorite falls) class of meteorites are a time capsule from the earliest days in the formation of our solar system. They are divided into the following compositional groups that, other than contains metal-rich, multi-layered chondrulesRoughly spherical aggregate of coarse crystals formed from the rapid cooling and solidification of a melt at  ~1400 ° C. Large numbers of chondrules are found in all chondrites except for the CI group of carbonaceous chondrites. Chondrules are typically 0.5-2 mm in diameter and are usually composed of olivine up to 3 mm (ave. 790 µm) in diameter that are texturally similar to those in the CR group. These concentrically layered chondrules reflect early nebular activity in which multiple phases of aggregation and heating occurred. 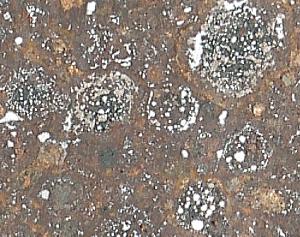