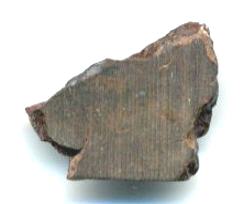 Found February 13, 2004
21° 04′ 31.6′ N., 57° 08′ 49.3′ E. During an expedition in Adam County, Oman, Rainer and Claudia Bartoschewitz found 64 fragments of a single meteoriteWork in progress. A solid natural object reaching a planet’s surface from interplanetary space. Solid portion of a meteoroid that survives its fall to Earth, or some other body. Meteorites are classified as stony meteorites, iron meteorites, and stony-iron meteorites. These groups are further divided according to their mineralogy and lying on a limestoneA common form of calcium carbonate (CaCO3). Other common forms of CaCO3 include chalk and marble. gravel plateau all within a distance of 10 meters (Bartoschewitz et al., 2005). The total weight of the constituted meteorite was 1.796 kg. The classification of SaU 290 was initially considered to be an anomalous E chondrite microbreccia with a weathering grade of W2, but the O-isotope composition of Sayh al Uhaymir 290 plots within the CH chondriteRare carbonaceous chondrite class that is chemically very close to the CRs and CBs as evidenced by the CH/CBb meteorite Isheyevo. The "H" stands for "high metal" since the CH chondrites contain up to 15 vol. % Fe-Ni metal. The first CH chondrite was found in the Antarctic Allan Hills field, distinguishing it as a member of this very rare carbonaceous group. 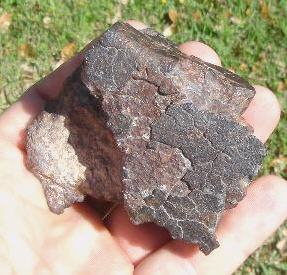